You need a small motor for a project, and you instinctively look at the wide range of standard brushless DC (BLDC) motors. Doing so makes sense for multiple reasons: they are straightforward to drive with today’s controller ICs or embedded firmware; you can easily match the chosen motor with necessary MOSFET drivers between your processor and the motor poles; and they are reliable and generate minimal EMI due to absence of sliding-contact brushes.

But wait… the BLDC motor vendor websites also offer brushed DC (BDC) motors, which have been around “forever.” Why would anyone choose a brushed motor with its issues with brushes or contact fingers as well as difficulties in tight control of their performance, except for their lower cost or to use in a legacy application? It just doesn’t make sense.

At least that’s what I thought until I saw an article in Medical Design Briefs about motor selection for a sophisticated portable infusion pump, “Every Drop Counts: Designing Motors to Optimize Home and Ambulatory Infusion Pumps.” This linear peristaltic-pump mechanism is an advanced application where low cost is certainly not the primary criteria of the selection process (although it is one of them, of course). The article clearly spells out the relative merits of a coreless brushed DC motor versus the BLDC (and the stepper motor, a BLDC variation) with respect to efficiency, compactness, lifetime, noise level, and reliability. It includes analysis of the design and sizing of the motor and makes very clear why the venerable brushed motor, albeit in a more-modern “coreless” configuration, was the best choice here.

What’s the difference between BLDC and BDC arrangements? In brief, the brushless motor has an array of electromagnetic coils (poles) fixed in place around the housing interior, and high-strength permanent magnets are attached to the rotating shaft (the rotor), Figure 1 (right). As the poles are energized in sequence by the control electronics (electronic commutation – EC), the magnetic field surrounding the rotor rotates and so attracts/repels the rotor, which is compelled to follow the field.

The current driving the poles can be a square wave, that’s inefficient and induces vibration, so most designs use a ramping waveform with shape tailored for the desired combination of electrical efficiency and motion precision. Further, the controller can fine-tune the energizing waveform for fast yet smooth starts and stops without overshoot, as well as crisp response to mechanical load transients. In short, what’s not to like?

In contrast, the brushed DC motor uses mechanical commutation to switch the polarity of the magnetic field of the rotor (also called the armature) versus the stator (the stator’s magnetic field is developed by either permanent magnets or electromagnetic coils, Figure 1 (left). Instead of permanent magnets on the armature, there are coil windings through which the current passes. It is the interaction and constant reversal of the magnetic field between rotor coils and stator, which induces the rotary motion. The commutation action that reverses the field is accomplished via physical contacts (called brushes) which touch and bring power to the armature coils as a result.

The brushed motor is available in sizes from tiny ones providing a few inch-ounces of torque through hundreds of horsepower and has been used successfully for over 100 years, and it does work well in many installations. The primary shortcoming is that the commutation contacts – implemented using graphite in larger motors – will wear down while also creating conductive dust; there is also sparking and EMI as the contact is made and broken. Smaller brushed motors use metal leaf springs with similar issues but on a much-smaller scale.

Most new designs choose the BDLC motor because it has a good combination of benefits and few drawbacks compared to the brushed motor. You can choose among different voltage, current, torque and other ratings, along with hardware drivers and control algorithms in software or firmware. Many are also offered with GUIs that make it easy to set the desired performance attributes (speed, acceleration/deceleration profiles, and responsiveness.)

In contrast, the brushed motor is much more difficult to control with precision, and the algorithms for doing so can only do so to a more limited extent. Some brushed designs add a rotary-position feedback sensor (optical, Hall effect, capacitive, or magnetic), which enables some improvement in performance but adds to the BOM cost, has mechanical-mounting issues, and increases control complexity. (In fairness, while many BLDC installations do not need such a feedback sensor, it is sometimes added there to allow closed-loop feedback and improved performance.)

Despite its apparent shortcomings, the brushed motor still has widespread application beyond the highly specialized pump example cited or low-cost toys. it’s very widely used in mass-market uses such as automobiles, even though electrical and mechanical conditions are harsh. IC vendors offer families of brushed-motor drivers, such as the DRV887x series from Texas Instruments. Their basic DRV8870 driver, Figure 2, includes provision for using pulse-width modulated (PWM) control to energize coils for improved performance; other ICs in the family add features such as fault reporting and current sensing. 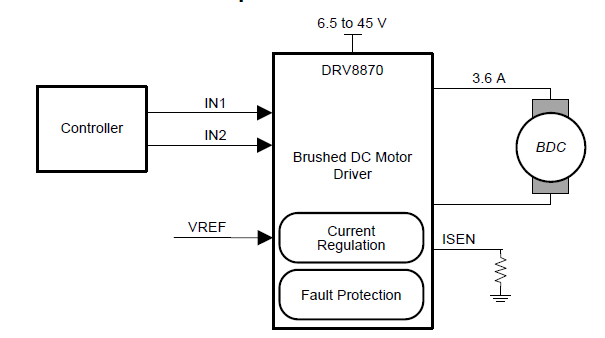 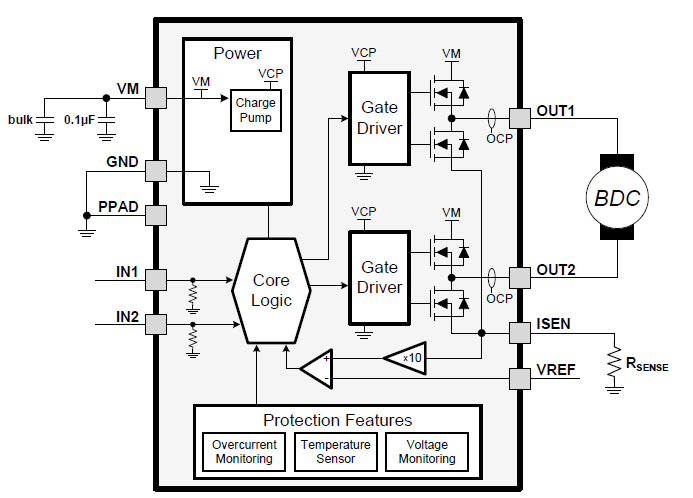 Fig. 2: a) This system-level view of the Texas Instruments DRB8870 shows how it functions as an improved brushed-motor driver IC; b) details of the additional circuitry it integrates for more efficient, controllable motor operation. (Image source: Texas Instruments)

The lesson is that contrary to the widespread, conventional engineering “wisdom,” the choice between the brushed and brushless motor is a simple one. Whether motor-related or not, a conscientious engineer will rank project priorities and their relative weight, then give a fair look at the various alternatives before deciding which one is the best in a specific situation.

As the industry’s only 1 Msps fully AEC-Q100-qualified 16-bit SAR, the 12 new devices are designed to opera...

A key trade show in the electronic design engineering community, Embedded World is where people come to mee...