The Future of Music Is for Everyone—Even the Deaf 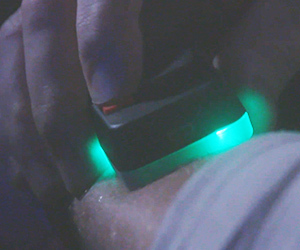 For Mick Ebeling, CEO of Not Impossible Labs, the fact that the deaf can’t experience music in the same way as the hearing seemed absurd. While "hearing" music does involve the different parts of the ear, there are many other parts of the brain that play into our perception of music. People who are deaf still take in the sounds of music, just in a different format: as vibrations.

To feel the vibrations of music, the deaf can stand close to speakers, hold balloons or go barefoot, but they’re still essentially hacking their way in. In a live music setting, the deaf tend to miss out on a powerful personal and social experience. So, Mick and the team at his technology incubator and R&D lab embarked on years of study and experimentation to figure out how to help those who cannot enjoy live music more fully. They found that the way to get around the ears was to bring musical vibrations directly to the skin, and they created a wearable device to do it.

Not Impossible Labs’ early prototypes received rave reviews from deaf audiences and musicians alike, and even television news hosts. While they knew they had created something powerful that the whole world could enjoy—deaf and hearing alike—they had only produced a few units.

It was then that the Not Impossible team brought their proof-of-concept to Avnet. Barely a year later, the two teams have collaboratively created one of the most sophisticated wearables on the market: Music: Not Impossible (M:NI). Today, it’s poised to transform the way people experience music around the world, and it’s powered by the Internet of Things.

One part of a multi-year partnership

Next, the Avnet and Not Impossible teams will continue to refine the product experience and scale the solution for commercial use. "We’re very close to where we want to be, but we’ll be refining reliability and cost," Erich said. "More importantly, we need to learn to play this new instrument we’ve created. Ultimately, it comes back to feedback from the users and the artists who begin to incorporate the product into the experience of their music."

But M:NI isn’t the only product the Avnet and Not Impossible Labs teams are collaborating on. As part of a multi-year partnership to create technology products that enhance accessibility and inclusivity, they’re developing VibroHealth™, a wearable technology that uses vibrations to help improve many of the common symptoms of debilitating illnesses, helping those affected to return to some of the activities they enjoy most. It leverages some of the same technology Not Impossible Labs created for M:NI.

"What we didn’t have on our own was a track record of taking an idea and scaling it to help many," Mick said. "But that’s what Avnet has done time and time again, and they’ve done it for far bigger companies than us. Our partnership is special not just because of the team’s passion, but because of Avnet’s proven track record of being able to help products and companies scale. And that completes Not Impossible’s mission to help one, help many. That’s why it feels like the perfect marriage."

Watch the video on how these partners created technology that produced one of the most sophisticated wearables on the market.