Earlier this year, Ikalogic sent me one of their IkaScope handheld WiFi oscilloscopes to try out, and after several months, I’ve finally had a chance to try it out. For this mini review, I’ll list the device’s characteristics first, and give my experience thoughts on afterward.

While most oscilloscopes are relatively large boxes that sit on top of a workbench, the IkaScope takes a different approach to things, and could at first glance be mistaken for a marker of some sort. That’s because this black and orange device contains only a single measurement probe, as well as ESP32-based circuitry needed to record measurements and transmit data over WiFi. Instead of an on-scope display, the device works with a variety of computing devices, including those based on Windows, Linux, iOS, and Android.

It features a 200MSa/S sampling rate, 30MHz bandwidth, and an 80-volt input range. It also has a very simple onboard IO configuration, with the probe itself used to turn the device on and start readings, and a pair of status lights that give you basic status and connectivity indications. On their website, the device is listed for 299 Euros, and it can be found for around $300 USD elsewhere.

The first challenge with this type of device is getting it connected to your network. Instructions can be found here, and at its most basic, it sets up its own WiFi network, allowing readings to be transmitted. This obviously precludes you using the “rest” of the internet, so the better solution is to use it as a device on your home or office network, which also enhances performance and battery life. Setting things up properly took a bit of poking around, but wasn’t a particularly difficult experience, and reconnecting after the initial setup has also been fairly painless. 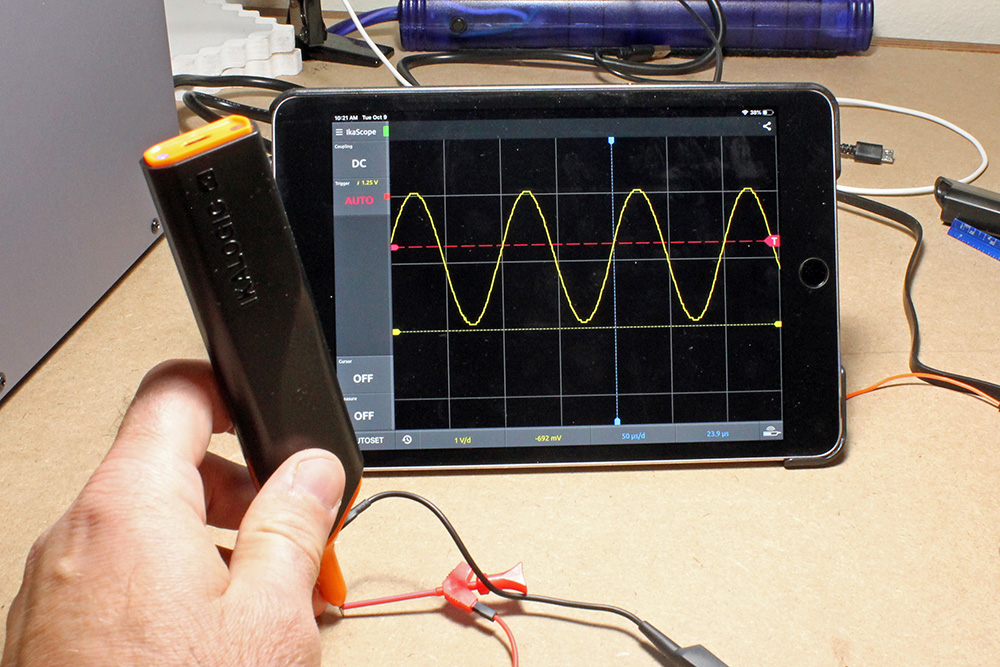 Once connected, I tested it out on a voltage supply, as well as a pocket oscilloscope acting as a signal generator. In all cases, it worked as it should have, and manipulating the voltage and time scales with a pinching motion—as if I was resizing a picture—worked quite well. I’m certainly not an expert in oscilloscope usage, but overall it was quite a pleasant experience on the iPad Mini 4 I was using. Other reviewers reported using older iPads with this device, which would be an excellent use of otherwise older technology.

Interestingly, one of the other reviews I looked at mentioned that the time base wasn’t always visible but testing it now—after nearly a year has passed—this functionality appears to be added. This kind of software-based setup would allow the authors to continuously update, something that Ikalogic confirmed that they intend to continue doing.

The Good and the Bad

First of all, this is a very clever device, and the software appears to be nicely refined. The simple interface consists of pushing the tip down to start readings and releasing it to stop. This was a design choice and helps preserve battery life as well as enabling the device’s auto-history mode. This could be a good feature if you’re trying to work with PCBs exclusively, but as someone who works more with breadboards and “less refined” electronics, I’d really like the ability to connect it, turn it on when needed and leave my hands free to experiment.

On a related note, there’s also no option to change the type of connector, which might be perfectly fine for the intended firmware audience testing boards on a desk but isn’t a perfect fit for me personally. Ikalogic has been considering an accessory that would allow this kind of functionality, or even adding this capability to the next batch of probe-scopes. One other quibble I had was that the plastic case feels a little light. According to their CEO Ibrahim Kamal, it’s been designed and tested to support regular shocks, so this may be a non-issue.

While not perfect for everyone, I’m certain there are engineers out there for which this device would work very well, especially those who primarily need to test and troubleshoot PCBs. The fact that you can display readings on a computer or smart device screen would also be ideal for those in engineering education, or anyone who needs to show a circuit’s response to a projector or a remote audience.

Innovative operating concepts are a differentiating feature for car manufacturers where displays play a cen...

Deeper integration with IoT stands out as the next major disruptive transformation leading to truly smart l...