In parts I and II of this article series, we discussed IoT market trends, explored smart home door lock controllers, and looked at wearables applications with example implementations. In part III, we will illustrate how a wearable implementation can be leveraged to interact with a smart home network.

To understand some of the ways wearables can interact with the smart home, let us examine some use cases: 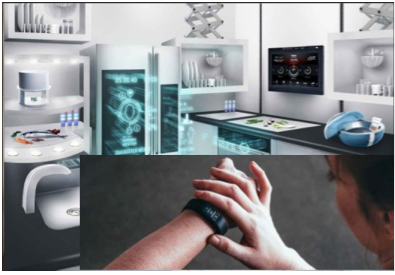 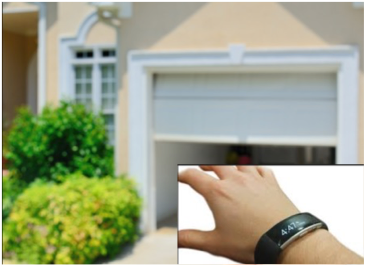 Gesture-based Interactive Control: A wearable device that includes 9-axis motion sensing can determine the orientation of a user’s wrist. This orientation data can be further processed to detect motion-based gestures. Such gestures can be used to control nodes. For instance, when a person is near the front door, he or she can hold their wrist flat, point at the door, and rotate their wrist clockwise to unlock the door or counter-clockwise to lock it (see Figure 3). 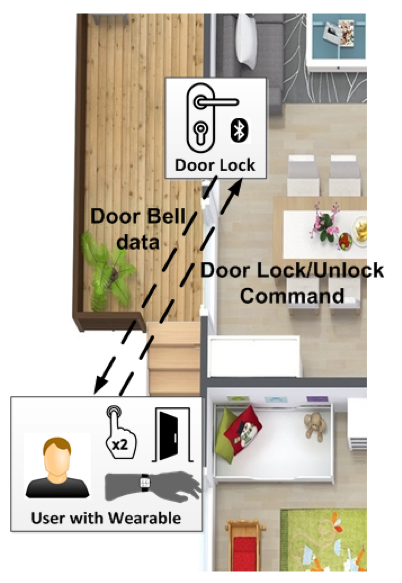 Similarly, the gestures shown in Figure 4 can be used to control light intensity when a person is near a room control node. For example, rotating the wrist clockwise increases light intensity while a counter-clockwise motion decreases it (see Figure 5). 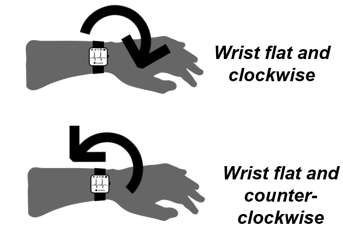 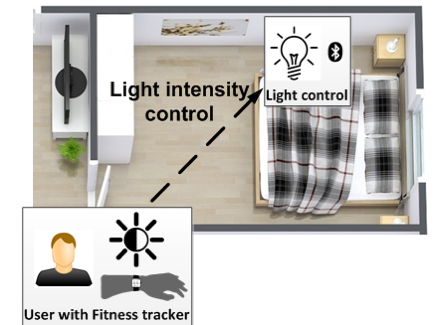 With the presence of multiple static BLE nodes and processing resources available in the wearable device, the location of users with wearables in a household can be triangulated within useful accuracy. This position, along with yaw data (direction) from the 9-axis sensor fusion algorithm, can enable users to point at an object and interact with it. Figure 6 shows an example of a user interacting with a light bulb in a multi-node smart home environment by pointing at it. The door-lock, bulb, and temperature nodes, each with a static location, are used to triangulate the wearable’s location in the house. The yaw data indicates the direction in which the user is pointing. Wrist gestures can be used to send control commands or otherwise interact with the node being pointed at. 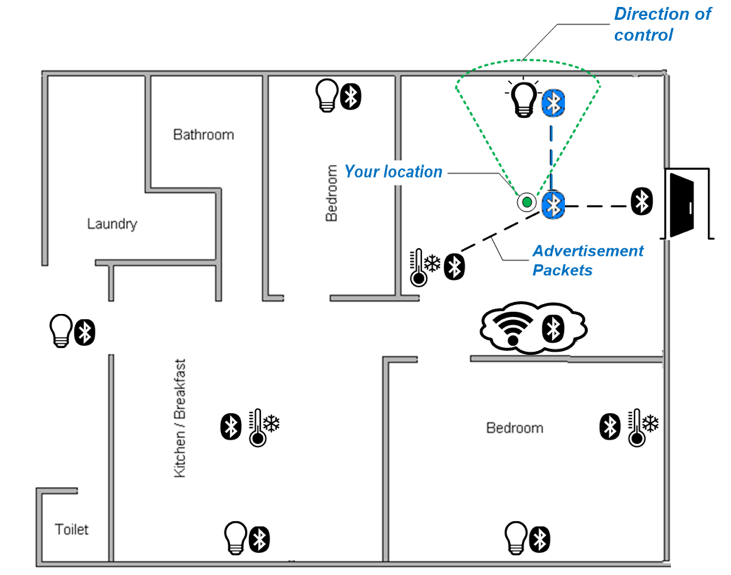 PSoC 6 BLE with its state-of-the-art security features, ultra-low power specifications, dual-core architecture and a Bluetooth low energy 4.2 radio fits the bill for both a wearable as well as a smart home device.

To be able to implement capabilities like this where a smart home and wearable device can interact, wearable devices need an embedded MCU with a flexible and integrated architecture. To be able to interface with the many sensors in a wearable device, the embedded MCU must support multiple and different standard digital and analog interfaces. The MCU may also need multiple ADCs for signal acquisition and integrated op amps to reduce component and wearable form factor. If the wearable supports a capacitive touch display, it will need sensors and processing resources to implement the various touch components, including buttons, sliders, and proximity sensors. Figure 7 shows the many features a wearable device may require.

Figure 7. Wearable Architecture Suitable for Interfacing with a Smart Home 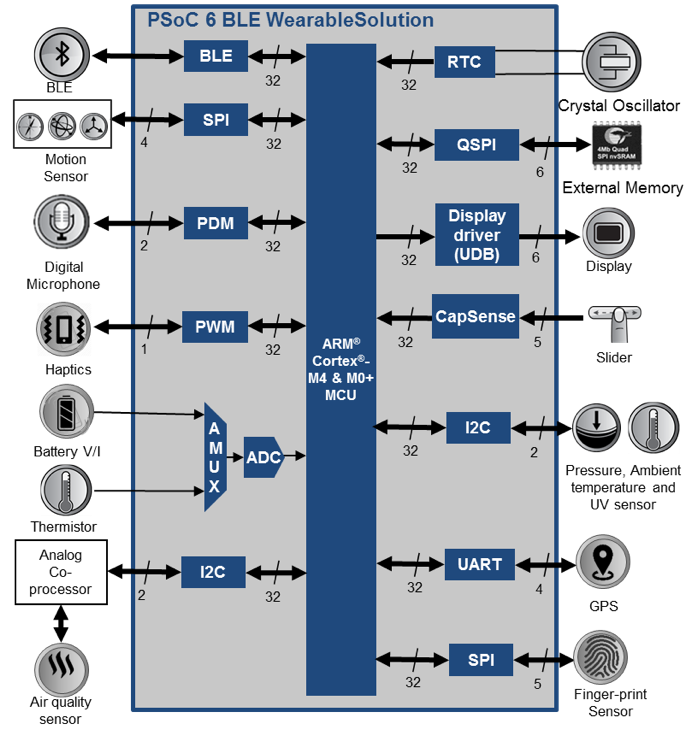 Also, as described previously, a dual-core architecture will enable developers to provide sufficient processing capabilities while maintaining overall low power operation. Figure 8 shows an example of how functions can be partitioned between a low power core (Cortex-M0+) and a high-performance core (Cortex-M4). 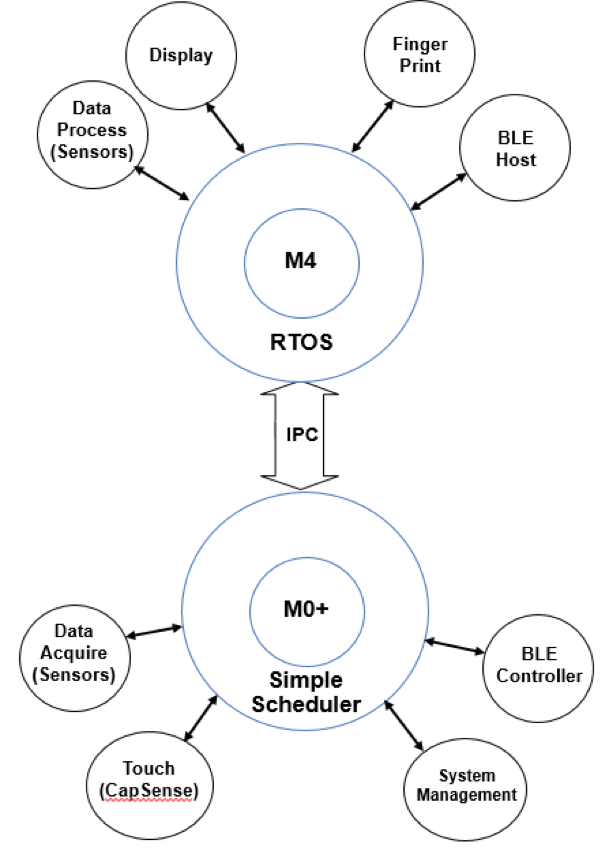 Low power is essential for wearables, which are often battery powered. An embedded MCU needs to support multiple operating modes to enable developers to optimize power efficiency. In addition to extremely low sleep and hibernation modes, the MCU should be able to dynamically scale the core voltage and frequency. 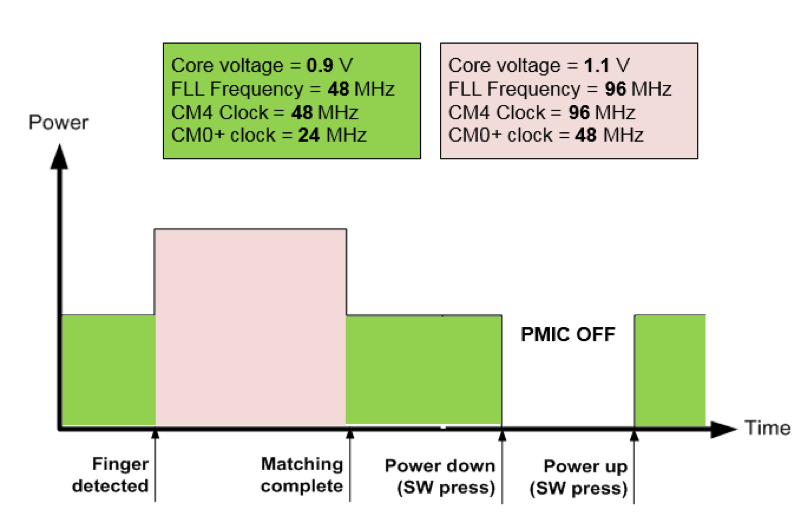 Another example of optimizing power efficiency is through management of the PMIC controller. The PSoC 6 embedded MCU, for example, can turn OFF the PMIC supplying VDD to itself. The PMIC can be enabled by a switch press. This eliminates the need for dedicated glue logic controlling the PMIC externally. In this power-down mode, the MCU consumes almost no current and can still keep the time. It can also be woken when it is needed.

Secure communications between wearable devices and the smart home network is important. Security can be implemented on many levels within the embedded MCU:

Table 1 summarizes many of the functions that can be implemented in smart home appliances and wearable devices.

This series has covered many of the important aspects of smart home appliance/controller and wearable device design. With a dual-core architecture, developers can provide the processing capabilities required for real-time analysis of sensor data while managing real-time system tasks with the greatest power efficiency.

Jaya Kathuria works as an Applications Manager at Cypress Semiconductor Corporation where she is managing the Embedded Applications Group and Solutions Development using the PSoC platform. She has 13+ years of experience in the Semiconductor Industry. She earned an executive management credential from IIM, Bangalore and holds a BS in Electronics Engineering from the Kurukshetra University. Jaya can be reached at xkj@cypress.com.

Meenakshi Sundaram is a Senior Staff Applications Engineer at Cypress Semiconductor Corporation. He works on Bluetooth low energy and System-on-Chip solution development with Cypress’ PSoC platform. He has 7+ years’ experience in Embedded System and Solution development. He holds a MS degree in Embedded Systems from Birla Institute of Technology, Pilani. He can be reached at msur@cypress.com.

Vehicle software has become ever more complex. We risk being unable to gather meaningful data to locate, tr...

Watches are no longer just for telling time. Smart watches have turned our wrists into smart phone holsters...