A few months ago, Adacore launched its first annual Make with Ada programming competition for projects implemented on ARM Cortex M or R processors. Running from June 20 to September 30, it was a contest whose goal was to help the embedded software community improve code quality by encouraging the use of the Ada and Spark programming languages.

Now, about six months later, the company is announcing the winners of that competition. Prizes were awarded to the projects that best met the overall criteria of software dependability, openness, collaborativeness, and inventiveness.

Prizes for the first, second, and third place finishers were 5000, 2000, and 1000 Euros, respectively. First place went to Stephane Carrez for his EtherScope monitoring tool that analyzes Ethernet traffic. Running on an STMicroelectronics STM32F746 board (Cortex M7), it reads Ethernet packets, performs real-time analysis, and displays the results on a 480×272 touch panel. The EtherScope interface can filter the results at different levels and report various kinds of information.

Second place was awarded to German Rivera for his framework to develop control software for the NXP cup race car. The development system is a miniature race car chassis coupled with a FRDM-KL25Z board and a TFC-shield board. The car kit also includes two dc motors for the rear wheels, a steering servo for the front wheels, and a line scan camera. The microcontroller is an NXP Kinetis KL25Z chip, with Cortex-M0+ core, 128 kbytes of NOR flash memory, and 16 kbytes of SRAM.

Third place was given to Shawn Nock for his Bluetooth Beacons (“iBeacon”) project. The target was a Nordic Semiconductor nRF51822 System-on-a-Chip (a Cortex-M0 part with integrated 2.4-GHz Radio) with a custom development board.

The transportation space continues to be ripe for hackers

According to various estimates, the number of connected cars will grow from today's roughly 50 million up t... 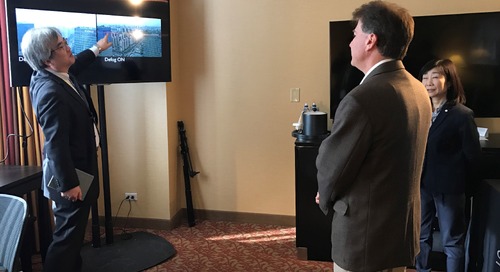 It was tough for a vendor to stand out at CES, amid all the lights, sounds, glitter, etc., in Las Vegas. On...