NXP Semiconductor occupied a portable in the show’s central plaza, and inside I found out why. The company was exhibit-ing a range of technology, from mobile and wearable devices to IoT connectivity and security solutions. The two demonstrations that piqued my interest at the NXP booth, however, were the automotive radar and smart home commissioning with NFC.

On the automotive side, John van den Braak showed off a 77 GHz front end radar built on 40 nm CMOS technology that provides the lower power, smaller footprint, and higher band-width required for next-gen active safety systems. While demonstrating the system’s accuracy through waveforms that calculate speed, distance, and angle/orientation, van den Braak explained that the company’s ultimate dream for automotive radar is fully integrated single chip solutions that achieve five-star NHTSA and NCAP safety ratings, and help reduce cost as the number of vehicle sensors increases. He predicts that 77 GHz radar systems should start hitting production vehicles in the 2017-2018 timeframe.

Across from the automotive solutions, Ian Morris and I ventured into the smart home as he and his team used NFC technology to create a plug n’ play IoT configuration experience. In short, the demonstration consisted of an NFC-tagged light bulb that was securely commissioned over the network with a single tap to your smartphone. Once commissioned, the RGB light bulb (as well as other home systems such as climate) could be turned on and off remotely using a smartphone app, which also tracked energy usage and could change the color of the lighting at the user’s discretion. This could be the easiest way yet to throw a disco party. A few months back when I first heard about the formation of the Open Interconnect Consortium (OIC) I though... 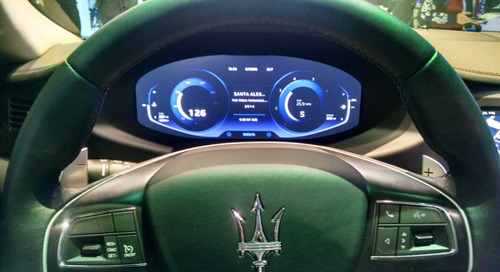 Hands down one of the coolest booths I visited while at CES, QNX Software had two vehicles on display that ...