The analog headphone jack is one of the most widely adopted interfaces in the smartphone and PC markets, used by hundreds of millions of consumers every day. Beyond smartphones and PCs, the analog headphone jack is standard in most products that are capable of audio playback. However, some recently introduced smartphones, such as the iPhone 7, HTC U Ultra and Moto Z, and other consumer electronics products are eschewing this legacy analog jack in favor of modern digital interfaces for audio. This trend is expected to continue, and to facilitate the transition there is a market need for new adapters and accessories with digital audio capabilities. Let’s examine some of the advantages of digital audio technology along with suggested solutions to enable digital audio connectivity for next-generation accessory designs.

The 3.5 mm analog headphone jack, as the name implies, transmits analog audio signals to the attached headphone or other audio accessory. Digital-to-analog conversion (DAC) and amplifier circuitry must be integrated into the host device, for example a smartphone. The headphone itself can be passive, and thus very low cost.

By contrast, some newer interface standards including Universal Serial Bus (USB) and Apple Lightning are able to transmit digital audio data. In this case, the attached headphone or other audio accessory must implement the DAC and amplifier circuitry. This circuitry requires power, which can be supplied externally, or more commonly via the USB or Lightning connector itself.

While analog and digital audio interfaces each have their own distinct benefits, here are some key reasons why smartphone and consumer electronics manufacturers are adopting digital interfaces on newer devices:

Alternatives to the analog headphone jack 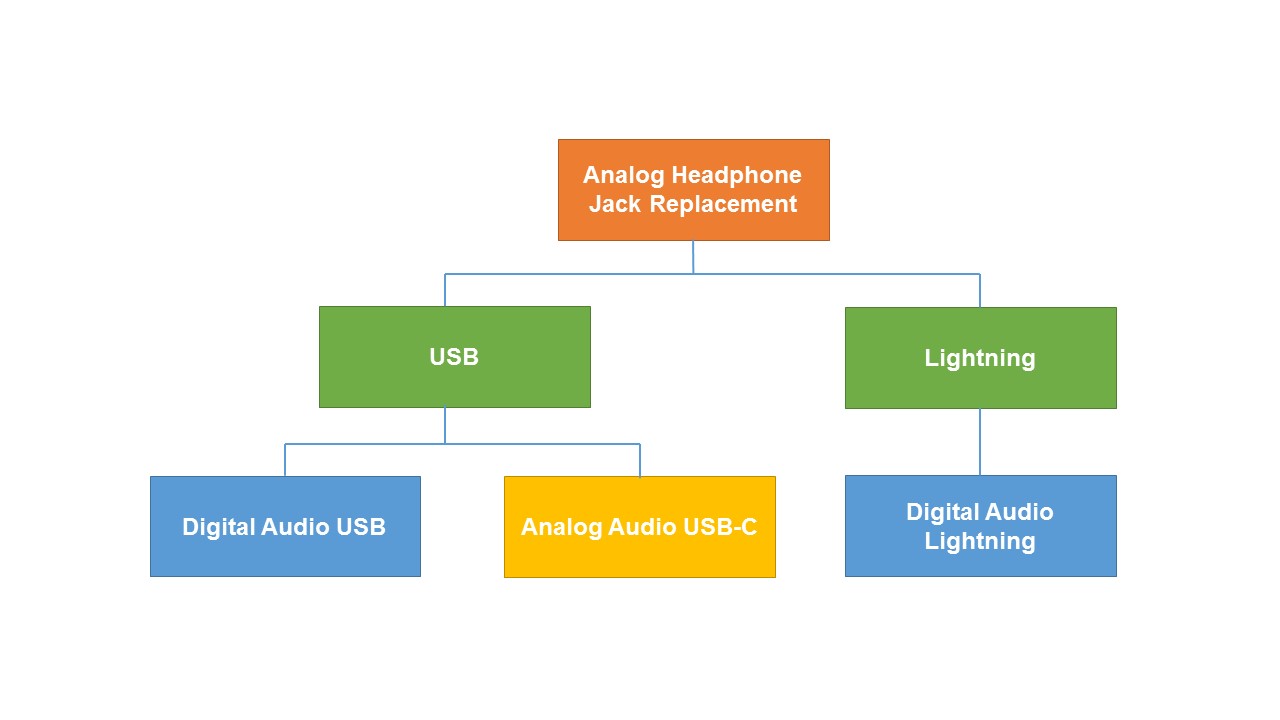 The new USB Type-C connector provides support for non-USB data protocols for added functionality; these include video (e.g. DisplayPort, HDMI), analog audio, and high-speed serial (e.g. Thunderbolt, PCIe) protocols. A subset of pins can be assigned for this additional functionality, negotiated between host and device at the time of connection using the Configuration Channel (CC1/CC2) lines, shown on the connector pin-out in Figure 2. This negotiation allows two distinct modes – Alternate Mode and Audio Adapter Accessory Mode.

The Alternate Mode supports DisplayPort, PCIe and other communication protocols when using the USB 3.1 SuperSpeed lines.

The Audio Adapter Accessory Mode provides a convenient way for manufacturers to build very inexpensive USB-C to 3.5 mm analog headphone jack adapters, allowing consumers to continue to make use of the large ecosystem of analog audio accessories. While this will ease the transition away from the legacy analog headphone jack, its importance and usage in the market will diminish over time as native digital accessories take hold. 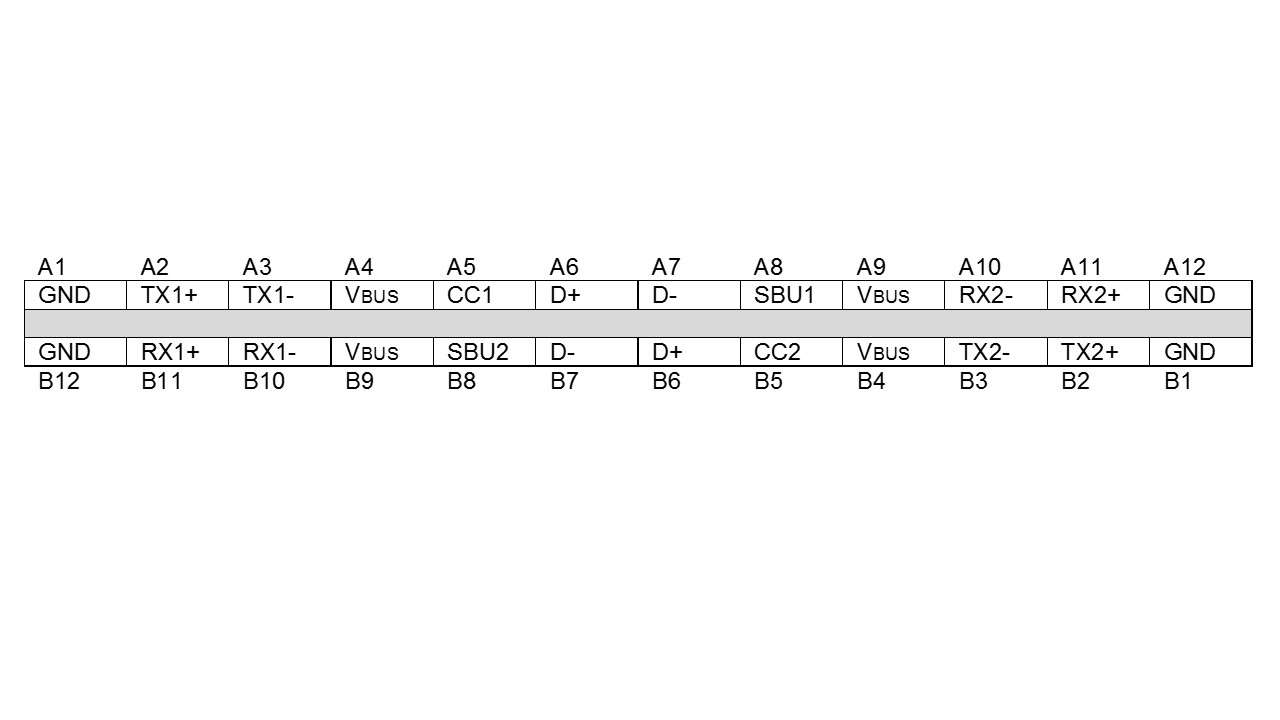 USB headphone/headset audio devices are not new to the market, having gained popularity in recent years for use with audio and video conferencing apps on PCs. However, demand for these products is expected to increase multi-fold with the removal of the analog headphone jack on mass-market consumer devices such as smartphones and tablets. As discussed earlier, there are several advantages to using USB for digital audio, including higher audio quality and advanced features. However, as with most changes, supporting digital audio via USB also poses some challenges. Headphone and accessory manufacturers face a major design effort to implement robust streaming audio over USB. For example, streaming audio over USB requires synchronization of data from host to the device. Although the USB specification defines a robust synchronization scheme, implementation remains challenging and can be time consuming even for the most experienced audio development team. Additionally, USB itself is a complex protocol that requires significant development time and cost to implement properly and to certify. Beyond initial product deployment, ongoing firmware and driver support and maintenance is required as major PC operating systems are updated.

USB audio bridge controllers simplify the development of USB audio accessories by integrating all the required hardware and software blocks, eliminating the need for complex USB and audio development. For example, the CP2615 USB digital audio bridge from Silicon Labs simplifies the process of converting audio data from USB to integrated inter-IC sound (I2S) without any code development.

Another key consideration while designing audio accessories is DAC or CODEC setup and configuration. There is a wide variety of CODECs and DACs on the market, each requiring custom configuration for optimal performance. This results in increased complexity and software burden for developers wanting to support multiple CODECs for their products. Turnkey USB audio bridge controllers, as shown in Figure 3, often provide internal memory resources to store CODEC configurations and support pre-programmed configuration values for a wide range of CODECs and DACs. 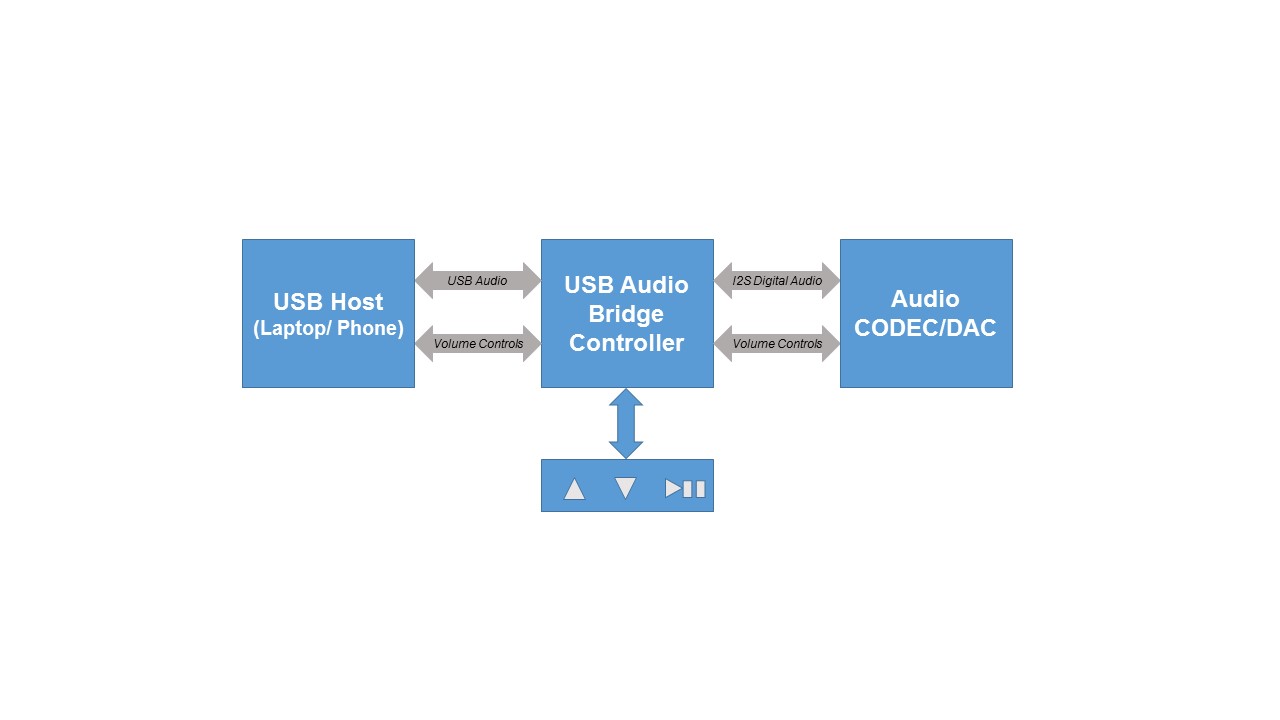 Apple made headlines worldwide last fall when they removed the analog headphone jack from the iPhone 7 and iPhone 7 Plus. During the keynote introducing these smartphone products, the company cited three key reasons for removing the jack:

Focusing on the Lightning port, Apple reminded the audience that Lightning was designed from the outset to provide great support for digital audio. In fact, Lightning enables features that are simply not possible with the analog headphone jack. For example, Lightning is able to provide power to the audio accessory. This allows headphone manufacturers to include advanced features such as ANC, while eliminating the need for a separate battery in the headphone. In addition, manufacturers building Lightning-based audio products can develop a companion app to expose advanced features to the user in an intuitive and easy-to-use fashion.

These new capabilities do, however, impose some added complexity for designers of iPhone audio accessories. To help designers jumpstart product development and focus on value-added product differentiation, digital audio bridge chips and evaluation kits are available to simplify the development of accessories for iOS devices. Silicon Labs’ CP2614 interface IC, for example, provides a turnkey audio bridge solution for a wide range of Made for iPod/iPhone/iPad (MFi) devices that use the all-digital Lightning connector. Target applications include audio accessories such as guitar and microphone recording dongles and audio docks. The bridge chip also provides built-in support for communication between iOS applications and accessory hardware, enabling a broad array of IoT accessories that operate with a companion iOS app.

The digital audio bridge chips and evaluation kits provide a cost-effective, comprehensive development platform for iOS accessory developers, enabling fast time to market through fixed-function MFi support. Many bridge chips like the CP2614 solution require no firmware development, which helps developers get up and running quickly with their MFi accessory designs. Developers simply select their customization options with an easy-to-use GUI-based configuration tool.

The CP2614 audio bridge chip supports 24-bit unidirectional and 16-bit bidirectional digital audio streaming, enabling developers to create high-quality, high-performance “prosumer”-class audio accessories. A communications channel can be established with an iOS application, enabling the app to interact directly with the accessory hardware through general-purpose input/output (GPIO) read/writes and access to the UART for custom data flow. The GPIO can be configured for button input and LED output and accessed remotely from an iOS app or used to control audio playback.

The popularity of digital audio interfaces is on the rise with manufacturers moving away from the analog headphone jack. While there are many advantages to using USB or Lightning connectors for audio, these interfaces do impose some added complexity for designers of digital audio accessories. Streaming audio over USB or Lightning is a complex and time-consuming design task. Major design issues, such as synchronization of audio data streams and CODEC/DAC configuration, can challenge even expert embedded and audio designers. Fixed–function, turnkey digital audio bridges minimize this complexity by providing a plug-and-play solution that does not require software development. These bridge devices provide an easy and economical approach to simplifying USB audio design. With their high integration and configurability, they eliminate the need for deep protocol knowledge and firmware development, enabling designers to focus their time and resources on innovating and differentiating their applications.

Ramya Kota is a Product Manager of IoT Products at Silicon Labs.

Ted Batey is a Senior Marketing Manager of IoT Products at Silicon Labs.