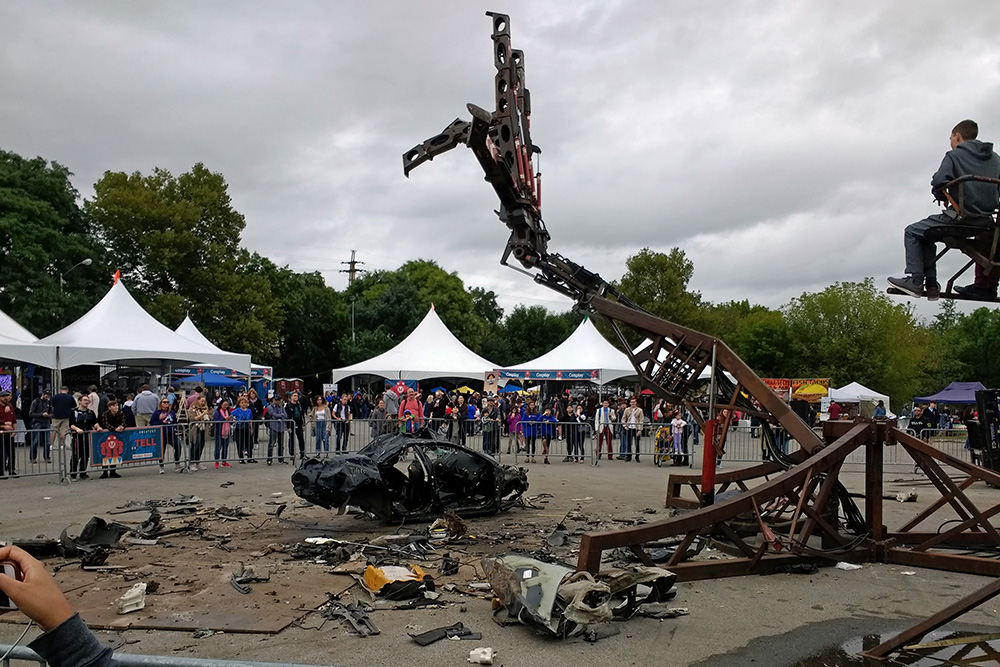 Dropping cars with the Hand of Man. Perhaps it won’t directly go into your next project, but maybe a source of inspiration? Image Credit: Jeremy S. Cook

This September I had the pleasure of attending the World Maker Faire in New York, where a wide variety of people, robots, and equipment come together to show off what they do and have made. While an enjoyable experience personally, from a MakerPro perspective, the question becomes what were some of the useful and interesting things that I saw there, and, ultimately, was the trip worth it?

As an engineering consultant and tech journalist, the biggest reason that I went to this show was for the people. I knew there would be many there I’d interacted with in various forms on the internet, and having everyone together in one place is really an amazing networking opportunity. If you’ve never had the chance to meet people you’ve worked with virtually in real life, it’s a really neat experience, as people tend to be extremely familiar even if you’ve never been in the same room. Seeing someone like this “live” is both enjoyable, and a great way to help cement valuable business contacts.

For those who don’t necessarily interact virtually with people that will be at this type of show, it’s easy to meet and talk to participants at their various booths, and there were three stages set up where you could hear people speak in a more formal setting. Afterwards, these people—some of whom are quite well known on YouTube or otherwise—generally make themselves available for conversation, and perhaps to answer any questions that you have. 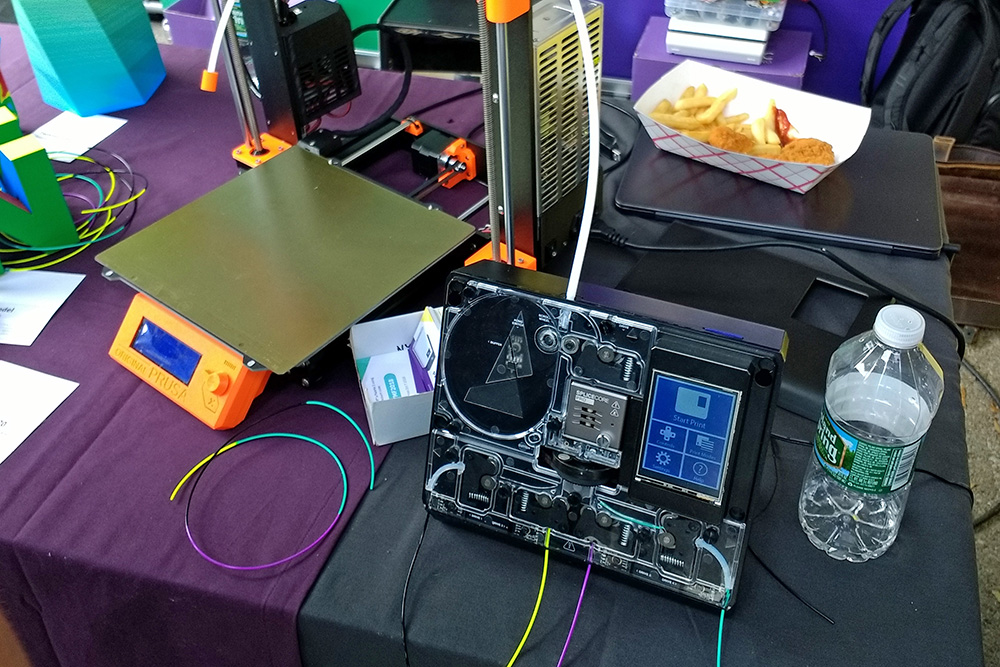 The Faire was also a good opportunity to see what advancements were available in 3D printers, a technique with which I’m just getting started. The Prusa booth—a premier 3D-printer manufacturer—was extremely crowded, and for good reason as they announced a brand new resin-based printer. While the build volume isn’t very big compared to some other printers on the market, this type of technology produces rather spectacular prints quality-wise. Another interesting innovation was the Palette 2 by Mosaic, a standalone device which strategically slices 3D-printing filament in order to produce color prints.

These are of course interesting tools for prototyping, but what about when you need hundreds or even thousands of a product you designed? For this purpose, I was pleased to talk to a representative from Jaycon Systems, which bills itself as a company that does “quick turn prototype to production.” While I’ve yet to use a company like this, getting a chance to discuss the type of capabilities they offer is certainly interesting—something to consider once you’re ready to step into mass manufacturing. 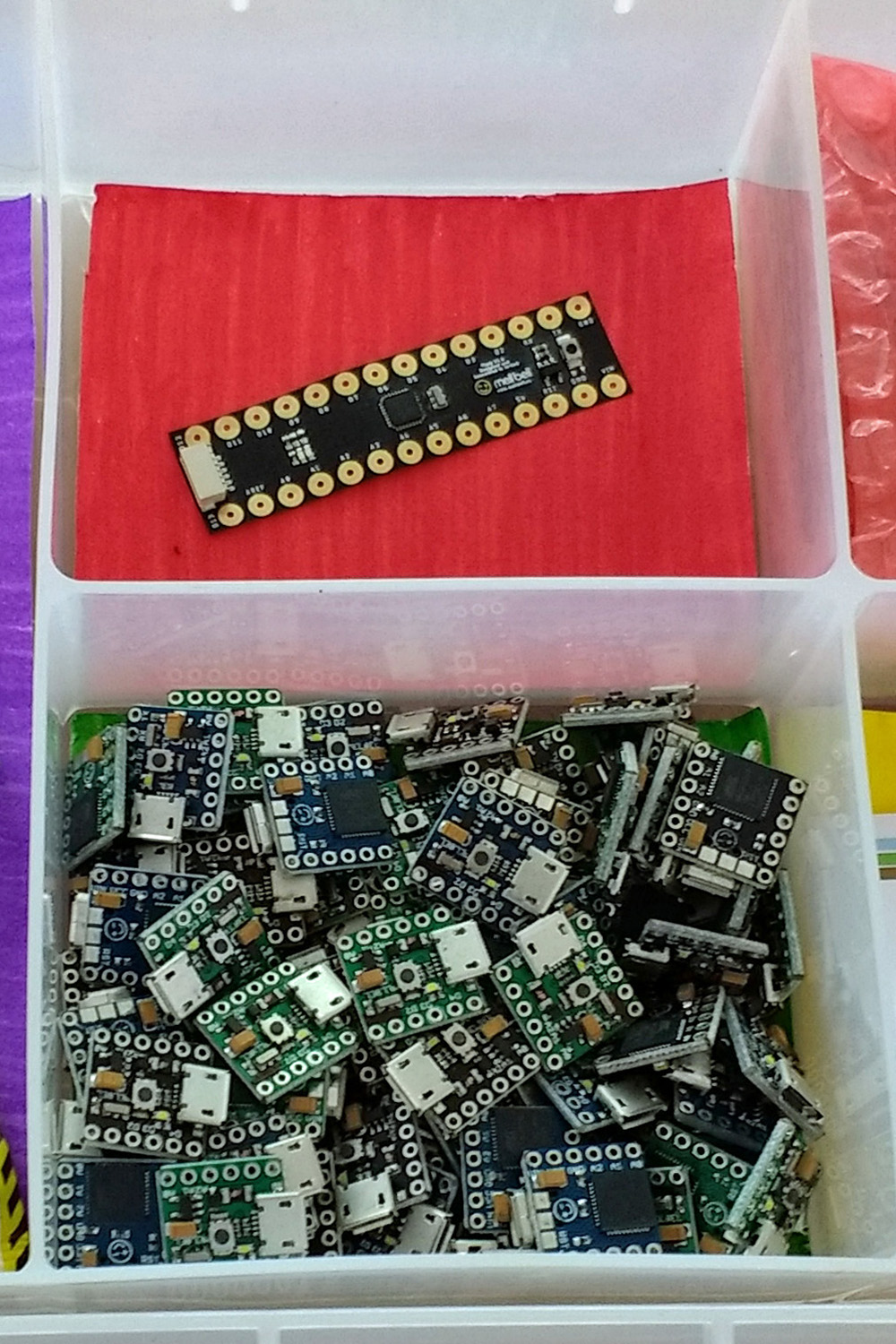 MellBell had their tiny Pico Arduino-compatible module as well as a yet-to-be-released flexible dev board on display. Image Credit: Jeremy S. Cook

A wide array of electronics-related organizations was showing at the Faire, from large players like Digi-Key, a major sponsor of the event, and smaller companies like Turta, MellBell Electronics, and Electronic Cats. While all of these companies have neat products, talking to their representatives can also be interesting simply to meet entrepreneurs growing their product.

The question then becomes, should you go to an event like this? This was the third MFNY that I’ve attended, and each time I’ve been able to meet an interesting array of people and see quite a few unique devices. Whether it’s paid off in real dollars so far, like many marketing/networking opportunities, it’s really hard to tell. However, when combined with the inspiration that I’ll certainly get from seeing other people’s work and interacting with other creative individuals, I’d say it was worth the trip!