In my last blog, we discussed how to Maximize Your Multicore-Based System. By doing so, you can potentially consolidate your workload, a topic that’s in vogue these days; basically, doing more with less—sort of. The “sort of” comes because you’re replacing different functions in an embedded system, albeit with far higher performing components.

A perfect example comes from one of our customers who recently replaced two embedded computers with one quad-core-based product. In the previous system, one computer was running the GUI while the other handled the control processes. The higher-performance CPU lets them run the GUI and control on the same embedded computer, with three cores dedicated to the GUI and the fourth for the more determinist control systems.

Where the consolidation becomes a challenge is when you want to retrofit into existing equipment. Swapping in new boards or servers isn’t as simple as it sounds, particularly from a software perspective. And then, ensuring that you’re really getting (significantly) better performance is key.

As Industry 4.0 takes hold on a global basis, innovations made in software allow OEMs to bring more edge-based industrial control solutions to the manufacturers of the world. In many cases, the operating system can serve as the heart of the consolidation, even bringing multiple OSs together to perform different functions with different levels of security through virtualization. And the control of individual machines, manufacturing data collection, communications, security, and safety functions can be consolidated into “virtual machines” within a single compute platform.

When consolidating your workload, all the usual areas of contention come into play, including safety, security, compatibility, and so on. And in the end, you have to be able to gauge whether it actually makes business sense to attempt these upgrades. Is the amount of consolidation worth the cost of getting there?

Intel makes a good case as to why workload consolidation is easier if you stick to the same processor architecture. Certainly, that rings true from a software perspective. You don’t want to be migrating code from one instruction set, say Intel, to another, like Arm.

Building your system to a common platform, such as Intel Architecture (IA) can yield a common, (mostly) open platform that can scale up or down, depending on the required workload at any given time. Intel claims that it can bring “Data Center” economics to an industrial IoT network, from the core to the edge. The result is reduced management time and lower operating costs.

The workloads that typically need to be run across the network include applications and services (where the UI and reporting resides); control-plane processing (where the decision-making occurs); high-performance packet processing (where high-speed traffic is controlled); and signal processing (where non-traditional data like audio and video is handled). There was a time, not too long ago, when each workload would be run on a separate platform. With today’s higher performing multicore servers, that can sometimes be brought down to a single board or box. 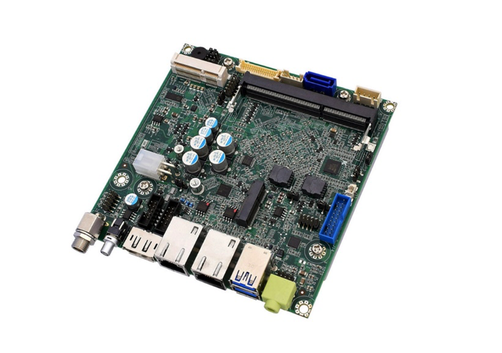 The WINSYSTEMS’ ITX-N-3900 SBC can handle your workload consolidation needs, thanks to its Intel Atom E3900 Apollo Lake CPU.

One SBC that can help you in workload consolidation is the WINSYSTEMS’ ITX-N-3900 NANO-ITX (120- by 120-mm form factor). Because the platform is based on Intel’s Atom E3900 Apollo Lake processor family, you can be assured that it has the horsepower to handle ML-based applications/functions. The board consumes less than 12 W, meaning that it can operate in fanless applications and performs reliably in industrial operating temperatures ranging from -40º to +85ºC.

This is the second part of a four-part series of articles presenting a unique product MPU Plus and a method...