The Rohde & Schwarz NGM200 family offers features ideal for developing battery-powered equipment operating at up to 20V and drawing currents up to 6A. Available as single-channel and two-channel models, both the NGL200 and NGM200 series offer the same performance and specifications to supply stable outputs with reduced residual ripple and noise. 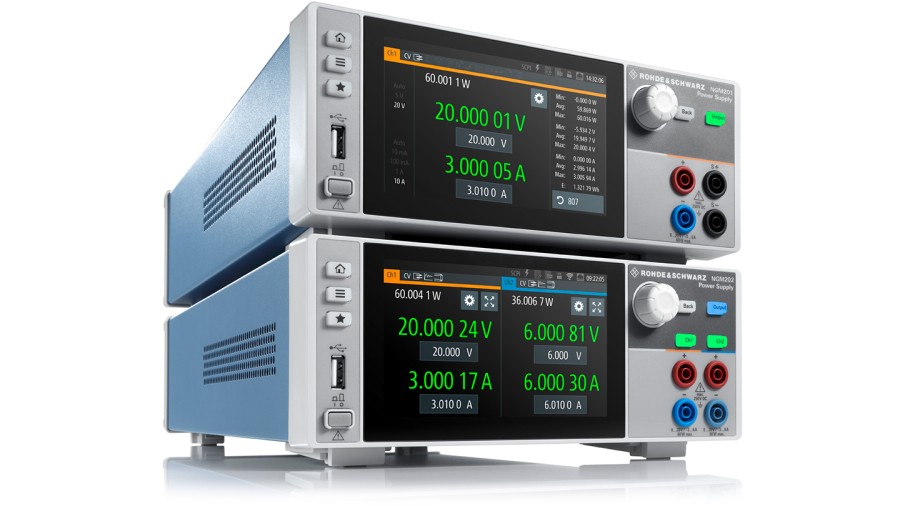 Devices that switch from a few µA in sleep mode to several A in active mode benefit from a load recovery time of less than 30µs. The two-quadrant architecture provides both source and sink functions, to simulate the charging and discharging of batteries, as well as to operate as an electronic load. In addition, Rohde & Schwarz introduced a FastLog function that captures spikes even in the µs range.

Additional measurement ranges increase read-back accuracy in the lower ranges, and a battery simulation option supports the modeling of batteries to simulate real-life conditions. A built-in digital voltmeter measures voltage values at any point in circuits of the device under test. Users can capture variations in voltage or current values as short as a few µs, with the high-speed data logging function FastLog, to log measurement values for voltage and current at an acquisition rate of up to 500k samples per second. A two-channel R&S NGM202 can even run data acquisition on both channels in parallel.

For maximum read-back resolution and accuracy, the R&S NGM200 power supplies feature four current and two voltage measurement ranges, resulting in a read-back resolution of 10 nA / 5 µV in the smallest range. An integrated battery model editor enables users to create their own battery models, by defining battery characteristics such as the state of charge, open-circuit voltage and equivalent series resistance. Pre-defined data sets for the common battery types Lead, Lithium-Ion, Nickel-Cadmium, or Nickel-Metal hydride are included.

The optional NGM-K104 activates an additional port, to connect the internal voltmeter in the NGM200 to any point in a circuit, so users can measure the potential difference. The NGM201 and NGM202 power supplies are available now, with prices starting at USD $4,130 for the single-channel R&S NGM201.

Power Integrations unveiled the CAPZero-3, their latest X-capacitor discharge ICs, in values from 100 nF to...