There has been a lot of debate on the market viability of Gallium Nitride (GaN) and Silicon Carbide (SiC) and the utility and cost-effectiveness of these wide-bandgap (WBG) semiconductors. Although a wide variety of WBG devices have been available for quite some time from several different vendors, there still seems to be some skepticism out there. However, the recent announcement from Power Integrations demonstrates that the WBG team just got a major player.

Based on internally-developed high-voltage GaN switch technology, the latest members of Power Integrations’ quasi-resonant InnoSwitch3-CP, InnoSwitch3-EP, and InnoSwitch3-Pro ICs use GaN switches instead of silicon devices on the primary side of the IC. GaN’s improved performance reduces conduction and switching losses (Figure 1). 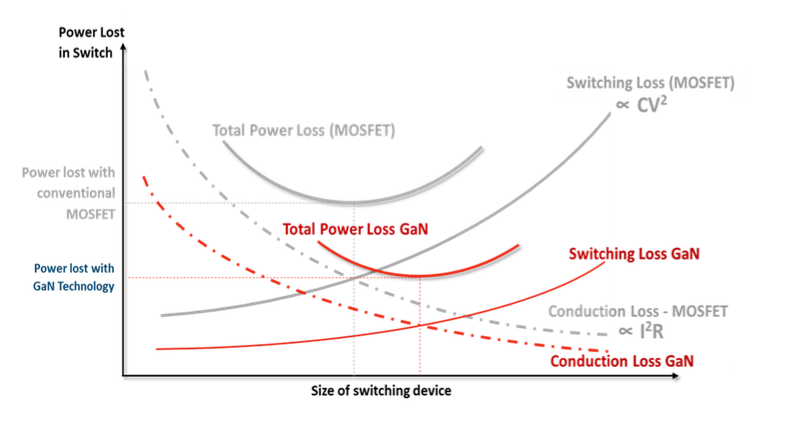 Figure 1: Conduction and switching losses in Silicon vs. GaN

The ICs have an efficiency of up to 95 percent across the full load range, and up to 100 W in enclosed adapter implementations without requiring a heatsink (Figure 2). Intended for use in high-efficiency flyback designs, the new ICs provide accurate CV/CC/CP independent of external components, and can interface with fast-charging protocol ICs. The InnoSwitch3-CP and ‑EP variants are hardware-configurable, while the InnoSwitch3-Pro incorporates a digital interface for software control of CV and CC setpoints, exception handing, and safety-mode options.

We were able to talk to Doug Bailey, the VP of Marketing & Applications Engineering at Power Integrations about their recent announcement.

Doug Bailey:  It is a big deal for us. We had been working on GaN for quite a long time. Once we spotted this several years ago as an emerging trend, we felt that we had to participate. We also felt that we needed to control certain aspects of the technology, and so we made the investments at a very deep level. Our business model is to develop all of our transistor switch and process technologies ourselves and we developed our GaN products entirely internally. So it is a huge deal for us. It was a major investment, and it's paying off beautifully at this point.

ECD: Can you talk about the amount of the investment?

Doug Bailey:  I can't go into the details, but it's been over several years, and we're running a facility, so you can imagine that it's not an inexpensive and insignificant investment for our company. This also represents a huge human investment. We were blessed with having been able to attract several extremely good scientists who had been working on GaN for many, many years. I think that the experience that the industry has had in developing GaN for LEDs was also very helpful.

ECD: We heard that your GaN technology is a little different than some.

Doug Bailey:  That is correct. We elected to use sapphire as a substrate. The industry related to sapphire is very well established, and in fact, one of my first jobs in the semiconductor business was a silicon-on-sapphire memory back in the late 1980s. So for example, radiation-resistant memories on sapphire wafers have been around for a long time. Also as I mentioned, LEDs leverage sapphire wafers as well, so it's not an outlandish choice.

ECD: How much of an effort was it to integrate GaN into the InnoSwitch design?

Doug Bailey:  We worked very hard to make it as seamless as possible. It's not quite as simple as pulling out the silicon transistors and replacing them with gallium nitride. But it looks that way to a customer, who gets the switching-loss reductions and other performance advantages of GaN. So you get all the advantages of the InnoSwitch, you know, the level of integration, of FluxLink feedback, and all of the safety features and modes. But you get a better one that's more efficient, and one you can run more power through within the same thermal environment. That's why we see 45 watt and 60 watt adapters without heat sinks.

ECD: Now when it comes to the marketplace, I'm not asking you to predict the end of silicon, but where do you see GaN going within PI? What can you predict with confidence?

Doug Bailey:  I don't think GaN will kill silicon, and that's simply because of the practical aspects of handling GaN devices. They're very, very tiny, and for some power levels, perhaps power levels below 30 watts or something like that, the transistor you need is just too small in GaN, so you can't handle it. You just can't bond to it. So I think that silicon will remain for some time in applications below 30 watts. But I think its days are numbered, frankly, and I wouldn't be surprised to see a reduction in the amount of silicon being used in higher power systems quite quickly.

ECD: The other side of that coin would be how are your customers reacting? Is it an evangelical sell? Are you selling to the converted? What does it look like in the field?

Doug Bailey:  We've been talking about it to our closest customers and key accounts, for about nine months. And the response has been fantastic. Everybody is curious about it. We've engaged a lot of design activity, with mostly positive feedback. Customer concerns have been related to nervousness about the amount of hours that GaN has been deployed in the field. It's actually not about reliability concerns, because we can prove reliability. That's not what people are worried about. People are worried about what they can't see. So is there a failure mode that we haven’t thought of? So far the answer has been “no;” we've had precisely zero returns from our customers due to GaN.

ECD: Is there anything that I missed that you'd like to highlight?

Doug Bailey:  I think the one thing that's worth pointing out is where we expect to see GaN showing up in power converters. The first place that we have seen it is in the aftermarket adapter guys, particularly those using USB PD in the 30 to 60 watt range. That market is a very competitive market, but it's also a market where people get a lot of utility out of having a smaller adapter. This adoption is a validation of that technology, as is the fact that you can buy a GaN-based adapter today from places like Best Buy, Amazon and the Apple Store.

The RF wireless power transmitters can power devices up to 80 feet away with up to 1 W of power, and levera...

Be sure your system is protected against power-supply faults as well as the complementary scenario.