IBASE Technology announced the release of the AMI230, its latest series of robust embedded systems based on the 9th/8th Gen Intel Core platform. Developed for applications in harsh environments, the AMI230 features an operating temperature range of -20°C to 70°C, operating vibration up to 3Grms, and over/under/reverse voltage protection.

The AMI230 series, which is built on the Intel Q370 MB230AF motherboard, has multiple I/O including 8x USB 3.1, 4x COM and 3x M.2 (B-Key, E-Key & M-Key) for NVMe storage. The series also hosts a number of WiFi and 4G/LTE options, in addition to an HDMI/DP/DVI-D display interface.

A list of features within the AMI230 series, which was released by the company:

Vicor announced the relase of the DCM5614, a new isolated DC-DC converter. The converter is isolated and re... 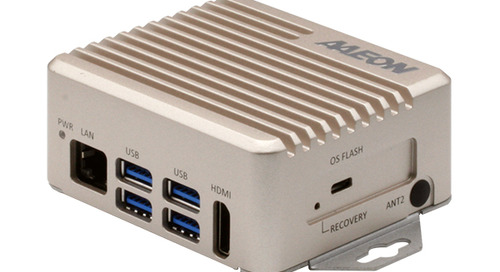 AAEON announced it is releasing four new rugged embedded platforms that will be powered by the NVIDIA® Jets...