GLOBALFOUNDRIES (GF), announced its purchase option agreement for about 66 acres of land adjacent to its Fab 8 manufacturing plant in Malta, NY.

“Amid growing consensus in our nation's capital for investment in semiconductor manufacturing, it's more important than ever that we are ready to fast track our growth plans at GLOBALFOUNDRIES’ most advanced manufacturing facility in the U.S.," said senior vice president and general manager of U.S. Fab Operations at GF Ron Sampson, in a press release. “With this agreement option, we now have additional flexibility to expand our footprint and position Fab 8 for future growth in Saratoga County and New York State, while strengthening U.S. leadership in semiconductor manufacturing."

The company, which employs approximately 3,000 people, has invested over $13 billion in the Fab 8 facility. Recently, GF announced the facility is being brought into compliance with both the U.S. International Traffic in Arms Regulations (ITAR) standards and the highly restrictive Export Control Classification Numbers (ECCNs) under the Export Administration Regulations (EAR).

GF employs nearly 3,000 people and has invested over $13 billion in Fab 8, its most advanced manufacturing facility in upstate New York. The company recently announced it is bringing its most advanced Fab 8 facility in upstate New York into compliance with both the U.S. International Traffic in Arms Regulations (ITAR) standards and the highly restrictive Export Control Classification Numbers (ECCNs) under the Export Administration Regulations (EAR). 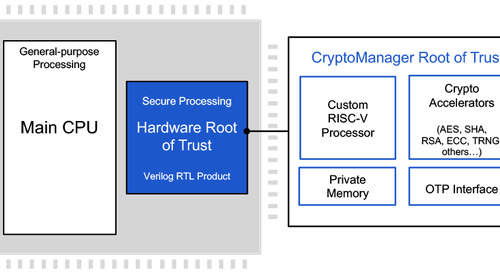 The CryptoManager Root of Trust RT-640 and RT-645 are available for licensing. In addition to a robust Root...