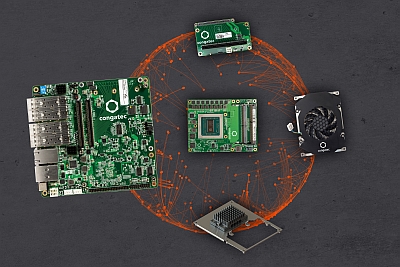 These Server-on-Modules in the COM Express Basic form factor (95 x 125 mm) are available with heat spreaders and heatpipe adapters for even low-profile 1U servers. The ecosystem is further suitable for virtualized on-premise equipment in harsh environments. The 100 Watt ecosystem also includes starter kits with the two different application-ready server-grade carrier boards conga-X7EVAL and conga-STX7 that, among other things, execute four 10 GbE interfaces, which are server-compatible with SFP+ cages for both copper and fiber optic cables.