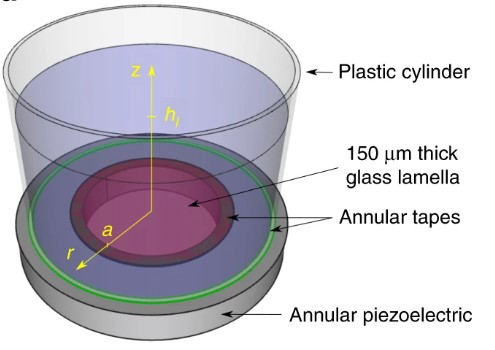 “The novelty of our approach is the ability to do exactly the same thing that people did in the propagative SAW domain using high frequency,” said CEA-Leti scientist Cédric Poulain. “In that sense, we followed the same route as in optics, where conventional (propagative) optical tweezers were replaced by the improved evanescent optical versions (using plasmon nano-optical tweezers). Here, in acoustics, the use of a very thin substrate in the low-frequency range favors the emission of evanescent sound waves.’’

Evanescent waves are localized waves in the vicinity of the emitting substrate with a very small wavelength gradient – and therefore a high level of force. To achieve such forces, conventional techniques (mainly SAW) require ultrasound waves in the MHz range, which are difficult to generate. In existing propagative wave technology, waves radiate into the fluid and thus decay very quickly as they propagate along the substrate. Because the radiation of these waves wastes energy, researchers commonly refer to them as “leaky waves”. Evanescent waves do not radiate, and consequently do not decay as they propagate along the substrate.

Mouser Electronics released “Designing an Idea,” as experts from Mouser provide an in-depth look at how inn...