IoT Standards 101: Practical Advice on Designing Now vs. Waiting for an Answer

With all the IoT standards around, which one should you choose? Zigbee®, Thread, Bluetooth®, or Wi-Fi technology? Or maybe LoRa™? Or should you just wait for 5G and NB-IoT?

It’s an understandable question, since there is a lot of confusion surrounding this topic. Part of this confusion is because it isn’t always clear what standards are suitable, as shown in the figure below. Much of the rest of the confusion is thanks to marketing departments’ unsubstantiated claims about new standard capabilities. 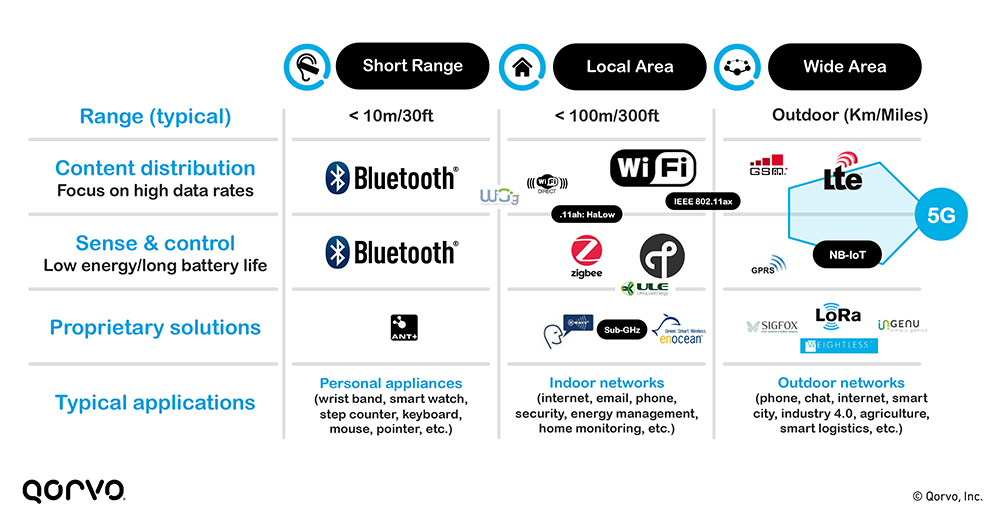 “But really,” I can hear you thinking, “What standard should I use?” Usually, I answer this question with another question, “How can you make money?” Typically, the determining factor isn’t the radio standard. For radio, most apply “good enough is good enough,” and making money is determined by the value created by the application that runs over wireless. (Wireless is just wireless, like a wire is just a wire.)

And keep in mind: Whatever wireless standard is leading the pack today, in five to 10 years, things will have changed anyway, so upgrading your network will be important. But waiting for “the final and ultimate” wireless networking technology is a waste of time.

Does that mean we should just go blindly into the future? Not at all! I believe we can take a look forward and gain knowledge. But first, let’s create some perspective.

The Relationship of Technology to the Spaces we Experience

Our smartphones have three radios (4G, Wi-Fi and Bluetooth technology). Why three, and not two (like a tablet), or one, or four? There is a reason — and it’s linked to technology, as well as how we experience our living spaces. Let me explain.

The fourth factor is usually cost, with a simple mantra: “more is more expensive.” In other words, more range is usually more expensive; the same thing applies to higher data rates and longer battery life. Technically, however, everything is possible, and you could have only one radio. It isn’t necessarily cost-effective, but it is possible.

Secondly, how do we experience space? On the smallest level, we first experience a personal space. Did you ever have a conversation with someone who came too close to your face, and you started to feel uncomfortable? If so, you understand what I mean by “personal space.” It’s the flexible bubble around you, wherever you are, and its size varies; if you’re squeezed into a busy metro, this space is much smaller than, say, when you’re in a restaurant or in an office.

We also experience a spatial situation that we can “cover” with our voice or, to a certain extent, with our vision. This could be at home or the office. It is private territory, compared to the world outside. We sometimes distinguish this space by calling it indoor versus outdoor, or private versus public.

And last but not least, there is the outdoor, public space — owned and regulated by the government.

If you translate these three spaces back to the three radios in our phone, there is some continuity: a Bluetooth radio for our personal space (our bubble), Wi-Fi for our private space, and 3G/4G and soon 5G for access in the public space.

(By the way, this neat division wasn’t planned. Anyone involved in the “war of standards” knows there was no higher committee deciding how to nicely split up different radios and standards over these three spaces. It just fell into place.)

In the past 20 to 30 years, every standard has battled for maximum usage space — and some of these battles are still going on today. 5G, the next public space standard, is claiming that it works well indoors and may make Wi-Fi redundant. Bluetooth technology initially made serious claims for the Wi-Fi indoor market (never successful), while Wi-Fi has been eyeing the Bluetooth market with Wi-Fi Direct. Although Wi-Fi Direct isn’t dominantly successful, it isn’t dead either — for drones, Wi-Fi Direct has found an interesting niche.

Extending the Concept to IoT Standards

So, at least for now, we have learned to be comfortable with the three-radio concept in our phone and how they seamlessly connect to how we experience “space.” But how do we deal with the plethora of low-power IoT standards? The first goal is to understand the marketplace of low-power standards.

So, there is a possible answer to where all these standards could be going, which would simplify the discussions that are going on in the industry:

This low-power/sense-and-control alignment makes all the sense in the world because it lines up with how we experience space, as well as the three radios in our smartphone.

However, just because this makes sense, it doesn’t mean it will happen – or if it does happen, that it will be set in stone forever. Technologies continue to try venturing into “other spaces,” and there are several initiatives going on in the market. These can vary from ways to maximize the reuse of existing technology, or trying to answer simple questions (like, can NB-IoT/Cat-X also be used for indoor networks?). Similarly, there’s an effort to expand Bluetooth Low Energy into the networking space and adding meshing capabilities to displace Zigbee — in the same way that Bluetooth technology tried to displace Wi-Fi around 20 years ago. These efforts may not be successful, but big companies are spending serious dollars on them.

One interesting note is that there may be a fourth domain, between the local area (indoor) and the wide area (public). There are large outdoor spaces that are still semiprivate, such as organizational campuses, harbors, airports and convention centers. So, the question may be: Do we need another standard that is focused on this “in-between” domain? The future will tell. Maybe the existing standards are flexible (and cost-effective) enough to serve this space well, or an emerging standard will be better qualified. In this respect, it’s interesting to see that LoRa, as a pseudo standard for outdoor, is very visible in this zone between private and public, in harbors and airports.

This leads me to mention the role between open standards and proprietary standards. History has shown so far that open communication standards are more successful than closed standards. Wi-Fi has pushed HomeRF out of the market; similarly, Bluetooth Low Energy pushed out ANT+.

But other standards are still battling, such as Zigbee, Thread and Z-Wave (Silicon Labs). However, Zigbee and Thread standards are both based on the open IEEE 802.15.4 standard (just as Wi-Fi is based on IEEE 802.11), while Z‑Wave is proprietary and closed. It’ll be interesting to see which will come out on top. Most likely, it will be a converged Zigbee/Thread interface. They already use the same application layer software (Dotdot), and their only difference is network layer software.

For standards venturing into other areas, it’s also interesting to mention that the boundary between Wi-Fi (high data rate) and Zigbee (low power) is not very hard either. From an application space perspective, there are applications that require higher data rates and, at the same time, need to run on batteries, thus requiring low power.

For some time now, significant efforts are ongoing to make Wi-Fi truly low power. The IEEE 802.11ah effort is one example, although it doesn’t seem to go anywhere because it’s operating in sub-GHz bands, which lack uniformity; different radio technologies are required in different areas in the world. However, true low-power implementations of Wi-Fi 4 (.11n) and Wi-Fi 5 (.11ac) might be interesting alternatives for Zigbee technology, if they reach low enough power — in other words, long enough battery life.

Putting This all Into Practice Now

Hopefully, this gives you a good overview of the competing standards, technologies, and trends as we know them today. It’s interesting to follow, particularly for everyone in radio development.

But there are three key things to keep in mind now:

Cees Links is a Wi-Fi pioneer. Under his responsibility, the first wireless LANs were developed, ultimately becoming household technology integrated into PCs and notebooks. He also pioneered the development of access points, home networking routers, and hotspot base stations. He was involved in the establishment of the IEEE 802.11 standardization committee and the Wi-Fi Alliance. He was also instrumental in establishing the IEEE 802.15 standardization committee to become the basis for the Zigbee® sense and control networking. Cees Links was the founder and CEO of GreenPeak Technologies, now part of Qorvo, and is now the General Manager of the Wireless Connectivity Business Unit. He was recognized as Wi-Fi pioneer with the Golden Mousetrap Lifetime Achievement Award and more recently being inducted into the Wi-Fi NOW Hall of Fame.

Updates in the latest release of the stack help organizations achieve compliance with the ODVA CT16 standar...