The Internet of Things (IoT) is a diverse market with substantial revenue potential. In fact, IDC predicts that by the end of this decade, the global IoT market will grow to roughly 212 billion devices and $8.9 trillion.

While as varied as the applications may be in this multi-trillion-dollar market – from fitness trackers and shipping containers to refrigerators and animal collars – one thing remains the same. All IoT products need consistent connectivity. Achieving this connectivity, however, can be riddled with challenges such as an assortment of RF environments, a wide range of bands to support (including the low LTE frequency bands of 700 MHz and 900 MHz), and price pressures:

Diversity in applications equals an assortment of RF environments

Along with a range of IoT applications comes an array of RF environments, which can greatly impact reliability and performance. Antennas react differently to RF environmental conditions – such as the proximity of the user’s head, hand, or a nearby object. Those differences make it challenging for manufacturers to create an IoT device that provides consistently high performance across all bands and in a wide variety of RF environments.

Let’s take wearables, for example. Wearable devices such as exercise trackers, offender tracking, and medical monitors are subject to frequent antenna detuning from heads, hands, and other body parts. A device that works fine in free space may not be able to connect to the network when placed on a person’s ankle, for example. In some cases, unreliability and inconsistent connectivity can mean the difference between life and death. Because the IoT opportunity is so big, it’s attracting many companies – such as consumer electronics and medical equipment manufacturers – that have little to no experience with wireless. That puts them at a competitive disadvantage in terms of time-to-market and cost.

LTE and a wide range of frequency bands

IoT applications need to support a wide range of frequency bands, including lower-band LTE, which can be a major challenge for the IoT. Although this 4G technology’s multi-megabit speeds might seem excessive for the vast majority of IoT applications, it’s a mistake to use that to rule out LTE. The entire mobile ecosystem is migrating to LTE. For IoT applications that will remain in the field for 5, 10, or 15 years – such as utility meter reading and in-vehicle infotainment (IVI) – LTE makes immediate sense because it eliminates the expense and hassle of replacing modules as more operators phase out their 2G, 2.5G, and possibly 3G networks.

The catch is that LTE creates several new challenges for IoT manufacturers. For example, it’s designed for use in more than 40 bands, half of which are currently in use. To enable global roaming with GSM/GPRS/EDGE/UMTS (3G), a single SKU, or both, an IoT device would need to support only three to five bands. To achieve a single SKU, global roaming on LTE (4G), or both, an IoT device would need to support a dozen or more bands. IoT manufacturers typically don’t have the experienced in-house RF engineering staff of smartphone and tablet developers to design, integrate, and go through the iterative process antennas require until the product passes operator certification.

Where 3G required just one, MIMO requires at least two antennas. That amount will increase as MIMO designs shift to 4×4 and 8×8.And that’s just for LTE. Many IoT applications require some combination of 3G/2.5G/2G fallback, Wi-Fi, ZigBee, Bluetooth, NFC, or GPS, which often means additional bands and thus additional antennas. Finding enough room inside an IoT device to support multiple antennas is challenging, especially those sold directly to consumers, whose form factor expectations are set by increasingly thin tablets and smartphones. Even if the IoT application doesn’t require global roaming, there’s still the challenge of finding room for the physically larger antennas required for lower frequencies such as 400 MHz, 700 MHz, and 900 MHz. Lower frequencies are common for IoT applications for reasons such as better in-building penetration and LTE bands in North America.

Price sensitivity adds to the challenge

The IoT market is notoriously price-sensitive – oftentimes more so than the tablet and smartphone markets. This is why device manufacturers rely on RF solutions that they can quickly and cost-effectively add to their IoT products, instead of having to develop antennas and other RF components entirely in house or heavily customize off-the-shelf products. The more development overhead, the tougher it is for manufacturers to price their IoT products competitively yet profitably. Savvy companies are turning to antenna system experts with extensive experience providing turnkey antenna system solutions for complex products. This approach helps device manufacturers bring products to market quickly and at considerably less cost.

The best way for device manufacturers to overcome these and other challenges is to employ an antenna systems approach for their IoT products. This approach starts with an experienced antenna and RF supplier offering a broad range of products, including design, integration, and testing services, to determine the best technology for the product – whether it’s a passive off-the-shelf antenna or an innovative active antenna system. This approach makes it easier and faster to meet each application’s unique performance, reliability, cost, and technology requirements.

Active antenna systems can fit into small devices, be dynamically tuned to support wide bandwidths, and provide more degrees of freedom in the design process. They also ensure reliability and performance in challenging RF environments, such as being mounted deep inside a building or in an underground utility vault.

Another major benefit of an active antenna systems approach is that it frees manufacturers from the cost, time, and hassle of sourcing the antenna and chip from multiple suppliers and then integrating everything themselves – and that’s assuming a manufacturer has the extensive cellular experience necessary to tackle integration. Either way, they can’t look for help from their chip suppliers, which typically don’t have experience designing and optimizing antennas. The exception is chip suppliers with an antenna engineering heritage. They’re the only ones capable of providing a turnkey, integrated system, decreasing optimization time and challenges while improving the ability to pass mobile operator certification on the first try.

Opportunities in the IoT market are endless. Partnering with an experienced RF supplier enables device manufacturers to not only slash development costs and time-to-market, but also provide the market-leading performance, affordability, and reliability that consumers and enterprises expect from IoT. It’s those device manufacturers who harness the latest technologies available to them – like active antenna systems – that will position themselves at the head of the Internet of Things. 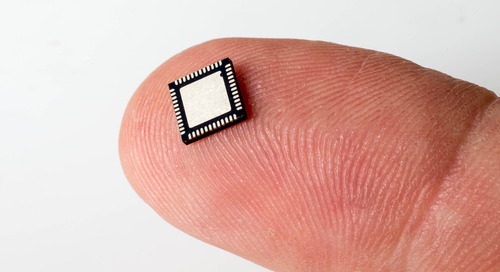 The last I remember of ultra-wideband (UWB) technology was a few years back when Tzero Technologies followe...