In Part 1 of our 5G Primer series, I described the overall 5G architecture and provided an overview of each component. In this column, I’ll dive into the Radio Access Network (RAN) of 5G.

The key driver of 5G is the Internet of Things (IoT). And of course existing smart phone services and applications will get faster and more feature rich moving to 5G. Mobile industry and standards organizations have categorized these services as follows:

All this means is that the RAN must be faster, higher capacity, and smarter. 5G is a comprehensive digital transformation of the network infrastructure. However, incremental steps involving the rollout of 5G RAN is being largely adopted as the first step toward 5G. This incremental step is often referred to as “Non-Stand Alone” or 5G NSA.

5G NSA means that the antennas and base stations being deployed will provide 5G frequency ranges, but the RAN will work with the existing 4G LTE core network. This allows for the RAN to be upgraded without requiring much to change within the LTE core.

The second range operates between 24GHz and 52 GHz. This range is called “millimeter wave” or mmWave. The mmWave spectrum will support uRLLC and mMTC applications. This is not without its challenges, however. Available frequency ranges are expected to be different between countries, which makes device manufacturing difficult. Smart phone and IoT device manufacturers could struggle, making a straight-forward, easily programmable device or sensor, which is easily configurable to the spectrum allocations of the country or region it’s operating within. 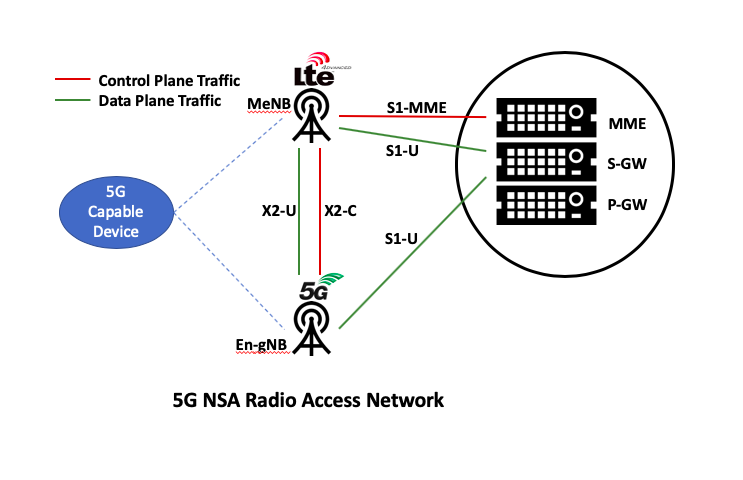 The master LTE and secondary 5G node both have direct interface with the Evolved Packet Core (S-GW/P-GW). However, only the master LTE node has a control plane connection to the MME.

Using the 5G NSA architecture, a 5G enabled device can leverage the bandwidth of the 5G RAN for the user plane traffic, but the control plane (bearer channel setup/teardown) remains the responsibility of the LTE master node. There may also be cases where the user plane traffic also passes from the 5G RAN node to the LTE master node for fallback scenarios.

Over time, as the next generation core is deployed, the MeNB and EPC components will be removed, which will result in the 5G Stand Alone (5G SA) architecture.

The Role of Cloud RAN (C-RAN)

In order to support things like uRLLC, you need real-time intelligence close to the edge. This means that micro-data centers will be integrated with the RAN to provide these features. In fact, as part 1 talked about the concept of network slicing, the RAN intelligence also has a concept of slices. RAN real-time functions include network scheduling, link adaptation, power control, interference coordination, retransmission, modulation, and coding. This means RAN sites will include dedicated hardware with high performance and low latency in order to effectively execute services requiring close proximity.

The RAN non-real time functions include cell selection and hand-off, encryption, and multi-connection convergence. These non-real time functions can be performed at a centralized location with standard processors and servers. The result is an architecture where there are micro data centers deployed within the RAN with specialized hardware to perform latency and real-time sensitive tasks that cascade into “central office” data centers at aggregation locations that perform a number of the non-real time tasks for the environment. These in turn cascade into a regional data center where the AI and Big Data analysis processing is deployed. The result is a distributed data center architecture that spans RAN, Core, and internet.

The 5G RAN architecture and evolution is key to meeting a number of service requirements around low latency, higher bandwidth, and higher capacity. But this isn’t just about deploying newer antennas. The splitting of spectrums for enhancing existing services and introducing new ones presents challenge and opportunity to mobile operators and device manufacturers alike. The micro-data centers that accompany RAN locations will be critical to supporting uRLLC applications. New business and cost models need to be addressed – micro-data centers mean servers and power so space and power costs associated with these new sites will be critical to the ability to cost-effectively support these new services.

5G RAN will be largely deployed in three phases. The first phase involving 5G Non-Stand Alone mode will use the existing 4G LTE core and antennas where the LTE base station will continue to manage the control plane while the 5G secondary nodes will provide the increased bandwidth and capacity for enhanced services. The second phase involves adding micro data centers for increased intelligence and low latency processing. The third phase involves completing the digital transformation by deploying the 5G core and removing the LTE RAN and core components.

The transformation at the RAN has already started and its evolution from a technical and business model perspective will be critical to the success of IoT in the future. 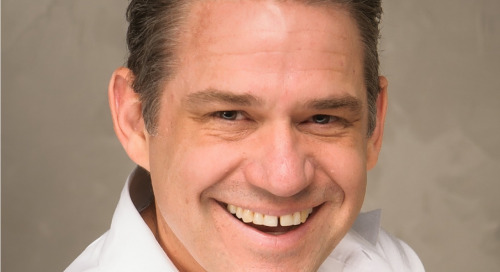 MediaTek’s HyperEngine game technology, paired with the G90 Series tunes your entire smartphone for the bes...