I’ve known about DSP Concepts for a while, but I didn’t really get to understand the company’s technology until a meeting at CES. There, I saw an eye-opening demo. Well, maybe ear-opening, as DSP Concepts specializes in audio algorithms.

In the demo that I saw, an Alexa-type development board was placed next to a speaker, playing music. I walked around the room giving commands to the input device. With each command, I would increase the volume on the speaker, to the point where I couldn’t even hear myself giving the commands to the Alexa. In all but one instance, it got the command right. What I didn’t mention was that also sitting there was a competitive voice-enabled product that did not fare well (and I’m being nice). It was obvious that the DSP Concepts algorithms were working their magic.

In the demo, the DSP Concepts algoritms, specifically the Audio Weaver Voice UI software, were running on an SoC from Amlogic, dubbed the A113X. With this combo, OEMs can integrate the A113X in voice-control products and achieve results similar to what I was exposed to. You can see a similar demo in this video. The A113X is based on ARM’s Cortex-A processor core. Audio Weaver lets the OEM configure its own solution for different array geometries, speaker configurations, and product features based on Alexa VOice Services (AVS). 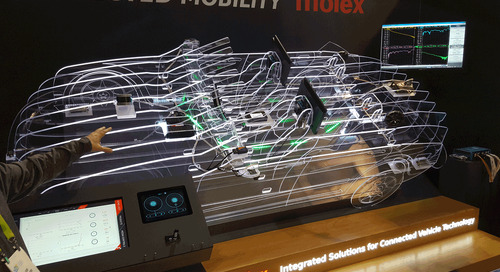 Automotive Ethernet: A crossroads for the connected car

The term “connected car” loosely describes any vehicle with Internet access. But in the age of IoT, is that...

Take control of the energy use in your home, especially if you’re using solar

Tool looks at, monitors, and controls the energy use within a home, with special consideration for solar en...