Home » IoT » Ingredients for an Industrial SSD
× Share this Article

Ingredients for an Industrial SSD

What is the differentiating ingredient that turns an SSD into an industrial grade SSD?

Industrial IoT and Industry 4.0 are far closer than at the verge of the horizon, and they bring with them disruptive changes and a demand for reliable data storage. This has ultimately increased the number of SSDs in the industrial storage sector. The demands for each component inside an industrial SSD are quite different from those inside a consumer product. Interestingly, most of these differences are addressed by one key component: the flash memory controller inside the SSD. 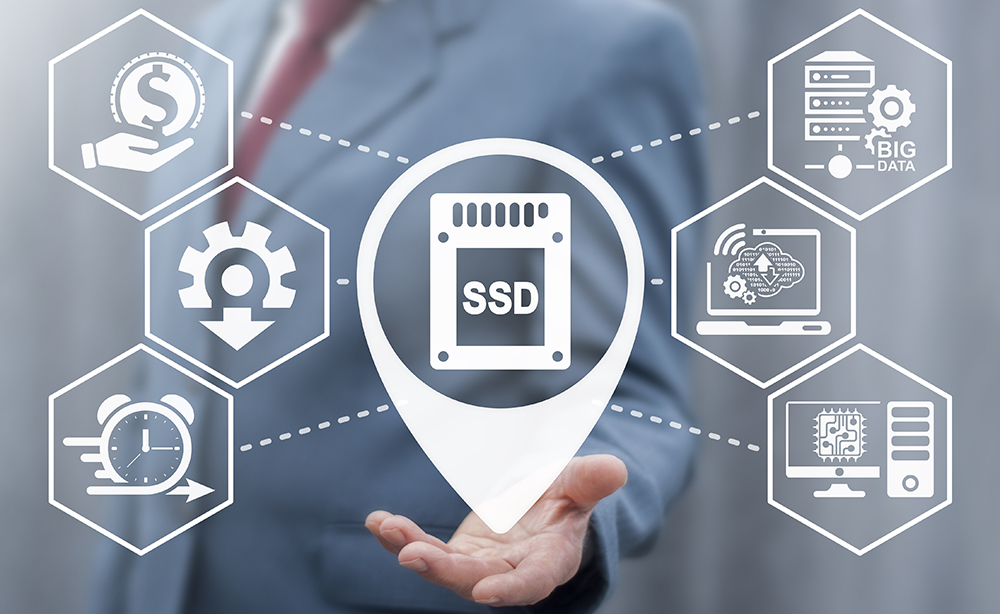 The flash memory controller of an industrial SSD has to support advanced flash management in order to ensure a more robust operation with high data endurance through a lower write-amplification-factor (WAF), higher data integrity through highly capable ECC and higher data retention. An End-to-End datapath protection provides even further means to ensure data integrity throughout all processing blocks. Protection against unauthorized access is another crucial feature of an industrial SSD. This is provided by encrypting the data following the Advanced Encryption Standard (AES) and supporting the self-encrypted-drive (SED) standard TCG Opal.

Most consumer SSDs are equipped with TLC or 3D QLC NAND flash memory. While a broad majority would still argue that an industrial SSD should be equipped with SLC or maybe 3D MLC NAND flash, this is not categorically necessary. SLC NAND flash is chosen because of its higher endurance and retention compared to TLC NAND flash, especially in environments that exceed the commercial temperature range from 0 °C to 70 °C. However, the increasing demand for storage capacity often dictates the use of a low-cost technology – SLC flash may simply not be available in the required capacity or the initial price may not seem competitive. Nonetheless, particular flash memory controllers enable a feature that allows it to operate MLC or 3D TLC flash with comparable endurance and data retention to SLC flash – this mode is called pseudo-SLC (pSLC). It opens the possibility to choose an MLC or TLC flash, yet at the same time, operate it with retention rates close to that of an SLC flash. Sophisticated controllers support pseudo modes of operation that trade capacity for reliability.

One of the most important features of an industrial SSD is power-fail robustness. An embedded device in an industrial environment is expected to be immune to sudden power failure and maintain data integrity throughout such events. High quality controllers implement a range of internal voltage sensors that monitor the power supply. Depending on the manufacturer, these can be individually configured for each application. If, in the event of a power outage, the power drops below the configured threshold, the firmware will immediately assert the flash write-protect trigger and further actions are taken to protect the data and set the application up for a safe shut-down and power-up.  Again, it is the flash memory controller that is responsible for the handling of such events and therefore represents the differentiator to a consumer device.

While flash memory comes in different sizes, interfaces and capacities, the technology behind it is identical. It is by design, inherently unreliable and it is the controller and the individual use-case that ultimately determines the lifetime and quality of the SSD. That’s why, all of these fundamentally necessary features of an industrial SSD – the compatibility with the latest flash memory, the high-reliability operation modes, a powerful error correction unit, advanced flash management, end-to-end datapath protection, powerful encryption, as well as authentication mechanisms and power fail robustness – are provided by Hyperstone’s latest industrial-grade SSD controller: the X1 SATA flash memory controller. It really is the differentiating ingredient that turns a SSD into an industrial grade SSD.

Sandro-Diego Wölfle is responsible for product life-cycle management, i.e. the duties ranging from product proposal, development, launch, mass production until the end of life. Having worked as a hardware design engineer before, he has a deep understanding of Hyperstone´s technology. He holds a Masters in Electronics and Information Technology from the Karlsruhe Institute of Technology, Germany and a Masters in Business and Leadership from the Zeppelin University in Friedrichshafen, Germany.