Harwin, a producer of interconnect solutions, announced it has expanded its portfolio with Gecko Screw-Lok (Gecko-SL) 1.25mm connector products, in a press release.

The cables, which have a 26AWG wire gauge PTFE construction, come in 150/300/450mm (6/12/18 inch) lengths.  Produced in both single- and double-ended arrangements, the Gecko-SL cable assemblies comply with the established IPC-620 cable and wire harnessing industry standard. They can be specified for either cable-to-cable or cable-to-board implementations.

They are constructed with metal backshells and are easily deployable due to the use of hexagon-slotted screw fixings and a mate-before-lock mechanism, per the release.Gecko-SL connectors exhibit resilience to high degrees of shock/vibration and extreme temperatures, as well as their relatively strong current carrying capacity (2A per contact, despite the narrow pitch).

Users can select 6-50 pin arrays for their assemblies. 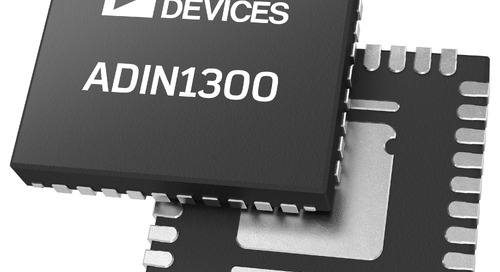 Analog Devices(ADI) announced the release of ADIN1300, a low-power, single-port Ethernet transceiver, in a ...