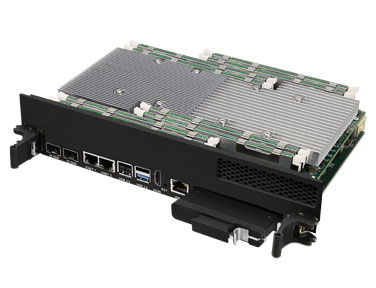 With the Phoenix VPX450 OpenVPX motherboard installed in a deployed and rugged air-cooled chassis, server-room performance is available to airborne, shipboard, vetronics, and battlefield installations where rackmount servers don’t fit or are inappropriate due to size, Hence, there’s no need to deploy platforms with commercial servers and all the baggage that accompanies them.

Up to four different types of plug-on modules can be deployed. There are dual SAM I/O PCIe-Mini sites, usually used for MIL-STD-1553 and legacy military I/O. These sites also accept mSATA SSDs for server data storage. An XMC front panel module provides plug-in I/O such as for a video frame grabber or software-defined radio. Finally, an XMC carrier can be equipped with an M.2 site, used for either storage or more add-in I/O.

Besides acting as a traditional OpenVPX slot 1 controller, the VPX450 server blade can be used as part of a compute cluster system, with each blade providing 34,330 PassMark performance. Inter-card communication via the 68 PCIe connections can create a high-performance cluster computing system through symmetric multiprocessing.

How the Industrial IoT is transforming industrial applications

IoT projects can offer whole new business models, such as product-as-a-service, which means that the right ...