Build it faster. Use less space. Reduce your BOM. It seems like every new component we write about spouts those same characteristics, or some form of them. So this time, I’ll let you make the decision for yourself as I discuss Octavo’s latest offering, the OSD335x C-SiP.

Octavo Systems has made a name for itself by putting nearly complete systems into tiny packages (aka SiPs). This latest offering comes really close to doing that by including a fair amount of memory inside the 27- by 27-mm, 400-ball BGA package. 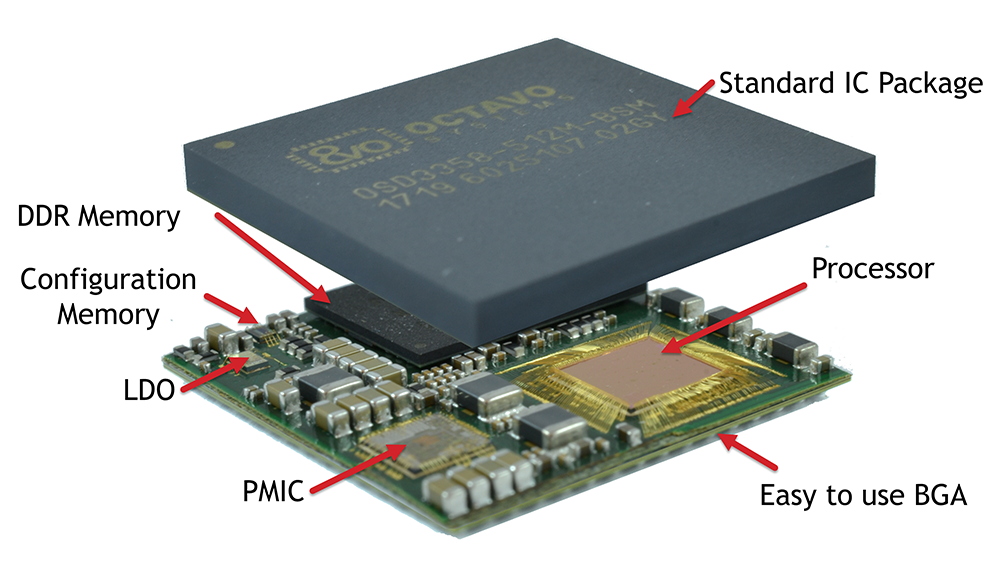 Based on a 1-GHz Arm Cortex-A8 processor (a TI Sitara AM335x), the OSD335x C-SiP integrates up to 1 Gbyte of DDR3 RAM, 4 kbytes of EEPROM, two power supplies, up to 16 Gbytes of flash memory, a MEMS oscillator, and more than 100 passive components. In addition to the relatively large memory blocks, you typically don’t find an oscillator and dual power supplies in a part like this.

According to the Octavo technical folks, the only other hardware that’s needed to complete a Linux-based design is external power and some resistors.

It’s great that the C-SiP adds all these components. What it also does behind the scenes is remove most of the tasks that revolve around laying out a board, including how and where to put the bigger components to deal with heat and EMI issues.

While the list of potential applications is a long one, Octavo claims that the small size and high performance suit the device for things like building automation, industrial control, and consumer products, as well as any IoT-related system.

The OSD335x C-SiP will be available by the end of the year. The first variation will be built on the AM3358 processor, with 512 Mbytes of DDR3 memory, and 4 Gbytes of flash. It’ll be available in industrial and commercial temperature ranges.