The Value of Adding Location for IoT Designs

Internet of Things is an all-encompassing universe that is intrinsically woven through many facets of our world already. This interweave will expand exponentially as the Fourth Industrial Revolution continues to innovate.

IoT has been around for a couple of decades, but with innovation and, more importantly, increased mobility, enterprises are embracing IoT more swiftly and realizing the critical need for location awareness. Providing the “what” from a device is important, but the “where” is the other side of the IoT coin enabling important context about the data that are reported.

Connectivity in IoT translates to far greater visibility of systems, processes and people.  Tasks that were once done manually are now automated such that detection, analysis, and action happen in mere seconds. Also, the intelligence that’s delivered as part of this automation means problems are resolved before they happen again, and enterprises can manage their productivity and output more efficiently.

Location is the Prime Analytic

As seen in Figure 1, billions of IoT connected devices are predicted, whether a pallet tracker, a fleet management platform or an emergency response button, knowing the location of a device at a certain time provides an infinite amount of intelligence upon which action can be taken. As a result, a host of large enterprises, MNO/MVNOs, device manufacturers, modem and module manufacturers, cloud services, and others have announced launches of location technologies and platforms.  Google Maps was launched in 2005 and has long enabled developers to include geospatial information in their applications. Many others have followed suit, such as Amazon with AWS maps, and Microsoft’s Azure Maps recently launched its platform, which offers a suite of geolocation services for developers to add geospatial abilities to their applications. Mobile Network Operators are offering location services for IoT devices, including AT&T with DataFlow, Verizon Wireless with ThingSpace, and T-Mobile with a service for devices on their network, which include location capabilities. 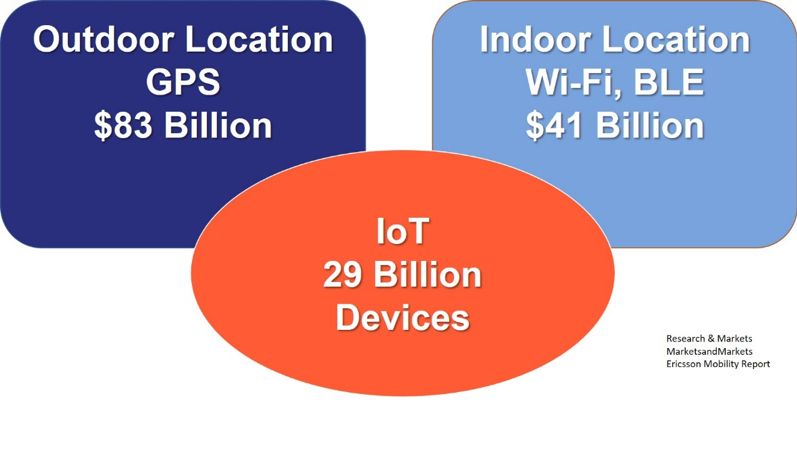 In the past, GPS was the de facto standard for locating a thing. The accuracy might not be as desirable for certain use cases, but GPS provided a good enough estimate for the time. Since the introduction of GPS to the public in the 1980s, many other location technologies have come to market with varying degrees of success. A simple comparison of these technologies is not easily done as far too many factors weigh into the equation to uncover the right technology for a specific use case.

Issues that must be considered for determining the best location platform include:

Power/ Battery Life – for use cases that require a long life, technologies that use the least amount of power are desirable.

Security – while every use case needs some level of security, when considering a use case that leverages location as part of the solution, it’s critical the location platform is absolutely secure.

Accuracy – depending on whether the use cases need millimeter accuracy or just the knowledge that a thing is within 200-500 meters, for example, will help discern the ideal location platform – or a hybrid of two or more solutions.

Coverage – if the use case depends on seamless indoor and outdoor coverage, the choices are a hybrid solution of two or more platforms, or leveraging the cellular network.

Size – for use cases that require a small form factor, which means fewer radios, batteries and antennae, other considerations like accuracy or battery life may need to be compromised.

Cost – when a very low-cost tracker is required, utilizing only one radio that consumes the least amount of power is ideal.

Incremental Improvement – As with the GPS network, upgrades have been made over time that improve accuracy, but it means launching expensive new satellites. The ideal location solution is self-healing and uses machine learning to improve itself with every location look up.

Native Location on Device – IoT devices typically don’t have location capabilities designed in. It’s important to select a solution with embedded positioning technologies that can be easily activated on the device and updated Over the Air (OTA). This allows for immediate scalability.

Let’s look at some of the most well used solutions and what they offer.

Global Positioning System (GPS) was first developed by the U.S. Department of Defense in the early 1970s and used exclusively by the U.S. military. The satellite system was opened for civilian use in the 1980s and was fully operational in 1995.

The accuracy of GPS signals broadcast from space varies depending on atmospheric conditions, satellite location (geometric dilution of precision), number of satellites seen, and other factors. GPS receivers need a clear line of sight to the satellite network and due to multipath errors, which can occur in dense urban areas, heavy wooded areas, tunnels or other covered structures, results may be less than desirable. The expected accuracy for a GPS fix is on the order of between 10m and 100m, depending on the factors noted above.

GPS does not work for indoor positioning, so its use is limited to outdoors and works best in a less dense area. Power usage on GPS devices can be far greater than any of the other positioning technologies, due to its search algorithm, which can continue to run when no satellites are visible, so should be designed for use cases that have larger battery reserves or a rechargeable format. Also, device size constraints need to be considered.

Public Wi-Fi hot spots are forecast to grow to more than half a billion by 2022.* Wi-Fi is readily available and an inexpensive platform for indoor use. Wi-Fi is a proximity-based type of location solution, which observes signal strength from reported Wi-Fi access point (AP) locations, which are stored by third parties such as Google.

Wi-Fi power consumption is less than GPS, but the range is limited, and extra equipment may be necessary to provide adequate coverage for larger facilities. Obstructions as simple as walls or metal structures can interfere with signals.  The expected accuracy for a Wi-Fi fix is on the order of 25m to 300m.

If outdoor coverage is also required, Wi-Fi combined with GPS or another solution will provide adequate coverage for many use cases. Using a hybrid solution does increase cost, size and power consumption and the device will need to reconnect as it moves from an indoor to an outdoor environment. This has been a common technique for providing good indoor and outdoor location coverage but is not a possible solution for many very low power IoT solutions that require a long battery life on the order of two to 10 years.

Introduced in 1996, Bluetooth was a collaboration of Intel, Ericsson and Nokia working to create a shared short-range wireless technology to bring to market. In 2002, IEEE approved the 802.15.1 specification.

Fast forward to 2019, Bluetooth recently introduced Bluetooth 5.0 with greater range and speed for connectivity between and among many devices. The Bluetooth Low Energy (BLE) introduction enables lower power or up to 4x longer distances in higher power applications.  The Bluetooth location technology is a proximity range application that can provide good indoor accuracy but requires a hardware-intensive network built to provide accuracy over a large area. To get the quoted 2m accuracy, a device needs to be within 6m of a beacon.

Dating back to as early as World War II, the first radio-frequency identification (RFID) systems used by the military across the globe were passive. The British swiftly developed an active RFID solution and the technology quickly innovated to the solutions we see today. The RFID tags are very small and inexpensive, allowing them to be attached to many different assets.

Since the range of RFID is very limited, RFID is an indoor-only location solution commonly used to track when items pass through chokepoints, such as doors at a retail store or items on an assembly line. RFID has been used to make many supply chains more efficient, but adoption has not been as widespread as it could be, due in part to its limited range and cost of beacon hardware deployment. By one estimate, the RFID market is 99 percent untapped, due in part to security concerns.

Location using a commercial cellular network can be accomplished in many ways; therefore, has various degrees of accuracy and other factors. A common method used is the cell ID method, in which the modem outputs radio information and signal strength of the serving cell and possible neighbor cells. The data are fed into a third-party database that tracks tower locations (similar to the Wi-Fi location technology). An example of cell tower information object fed into a third-party API would include cell ID, location area code, mobile country code, mobile network code, signal strength and timing advance of the towers detected. This type of location is expected to allow a rough order of location of around 300m to 3km, depending on the density of the network. It is a very simple, inexpensive technology to implement for seamless indoor and outdoor coverage if a high degree of location accuracy is not critical.

Another cellular technology in use is the carrier network technologies that are applied by the carriers themselves. These are standards-based and include complex architectural implementations. This includes technologies like Observed Time Difference of Arrival (OTDOA), in use with LTE full-band networks. In the United States, the FCC has required that handset-assisted location technologies for E911 calls must provide location within 50m for 67 percent of all calls measured.

This technology provides a good level of accuracy but is controlled by the carriers and only available through them.  Today its use seems to be confined to a location technology for handsets in emergency location systems. 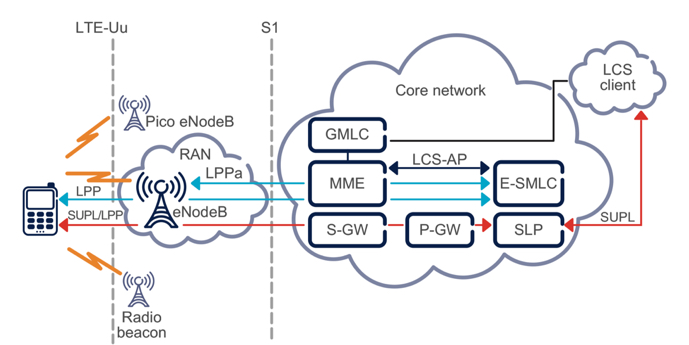 CAT-M systems with a lower bandwidth for IoT devices have an OTDOA standard, but it is not yet implemented in networks, and will not provide the same accuracy as the full band solution described above.

A newer technology that brings a more accurate cellular location to the market for IoT and does not require deployment by the network carriers themselves is Cloud Location over Cellular (C-LoC). This technology is an advanced Time Difference of Arrival (TDOA) methodology and is available with CAT-M and NB-IoT devices allowing location accuracy on the order of 10m to 200m, while requiring very low additional power above that already being utilized by the IoT device for communication since it is a part of the modem firmware. The technology allows a very secure connection, because the location information is never present on the device as it is with GPS. This technology is an ideal solution for very low power IoT devices that require accurate location indoors and outdoors.

Regardless of the technology used, location will increasingly be more important to provide context as IoT connectivity expands. Location is the prime analytic, which enables key data that improves customer experience, productivity and bottom lines.

Ergonomic, versatile and powerful tablet in a rugged form-factor for demanding applications