5G and new flip phone concepts are among the latest technologies and features that will further evolve the mobile device landscape. But where will our devices go next? Without a doubt, we are headed for much more than “more of the same.”

Science fiction has provided some hints; from clear devices that practically blend in with your hand, to wearables that could replace phones as our primary communication device. But is that really where things are headed? What other technological breakthroughs will make an impact?

The Need for Photorealistic Gaming

There is nothing quite like the first time you see a true evolution in graphic design. It happens every few years as devices progress and become more powerful, adding new dimensions of visual richness, depth, and realism. In the process, game developers are able to open a window into a world of awe-inspiring beauty that takes our breath away.

The results are not unlike the old saying, “A picture is worth a thousand words.” With pixel counts rising and textures becoming more lifelike, game developers have more freedom to create whatever they dream. Whether designing an alien world from scratch or recreating the magnificent details of a real town or city, the potential is only limited by a developer’s imagination. As we’ve seen year after year, there is no shortage of incredible game ideas.

Over time, graphical beauty needs to be pushed even further. Boundaries will be broken, and new levels of graphical achievement reached. Historical techniques can only go so far, but there is a new one on the horizon – ray tracing – that is raising the bar on what can be achieved.

With the ability to showcase spectacular shadows, unrivaled reflections, amplified ambiance, and impeccable illumination, ray tracing will drastically change the way graphics are designed. This rendering technique is already making an impact and will continue to do so for years to come.

Ray tracing also has the potential to significantly reduce the cost of making games. The vast majority of the production cost in modern games is the artistic content and how that looks in-game on the user’s device. The job of the game engine is to make that content look good, applying realistic lighting and shading effects. Today’s rendering technology means that artists have to spend countless hours tweaking and adjusting it to perfection.

Using ray tracing, which more accurately models the transport of light in a scene, can make the development of the realistic lighting and shading effects much easier for the game engine and its rendering technology. That means artists may be able to spend much less time in the cycle of tweaking and visualization to make sure everything looks good, reducing the overall cost of production.

Smartphones keep getting stronger and stronger thanks to a mix of advanced body construction, and glass screens that seem to improve with every generation. But what if the phone was soft and bendable instead? What if you could pick it up, fold it in half and slip it into your pocket without a second thought?

The idea of a folding phone is not new. In fact, it seems to be a design type every manufacturer is interested in exploring. With dual-display concepts increasingly cropping up, it is now possible to increase screen real estate without expanding the overall size of the device. Tablets will surely benefit from this as well.

But a truly bendable phone will do even more, twisting seamlessly as the user desires. The entire unit could be bent in any direction, greatly increasing its durability. It could also be thinner for easier storage but stronger than traditional smartphones, allowing the device to take a beating without skipping a beat.

This technology is still in its infancy, but the potential is not to be ignored. It could pave the way for some interesting hybrid concepts that reduce the need for multiple devices. In time, smartphones and smartwatches could merge, allowing consumers to wrap their phones around their wrists.

When Virtual Worlds Come to Life

Not all smartphone and related innovations are easy to spot from afar. Much like ray tracing, some are hidden inside the unit itself and may not be apparent before experiencing it firsthand.

This is particularly true for augmented reality (AR), a hugely promising technology that is yet to reach its full potential. Capable of placing virtual images inside of our real world, AR is bringing an entirely different dimension to gaming. More than virtual reality (VR), the shift is akin to the move from two-dimensional, side-scroller gaming to the fully immersive three-dimensional worlds we have today. In fact, AR could be even more significant, opening the door to a wide range of gameplay concepts that simply could not be developed – or even conceived – by any other means.

But as with many technologies, AR has use cases outside of entertainment. From medical assistance to auto repair training, current and aspiring professionals will rely on the technology to enhance the way they work. AR could therefore usher in a new era of efficiency by allowing hardworking individuals to perform with outstanding precision, whatever problem they are faced with.

As processors and sensors become more powerful, AR will be able to do all of this and more, augmenting a whole host of experiences. Whether learning a new skill, prototyping a new product or playing a board game with virtual pieces, the possibilities are endless. And future smartphones will help us get there.

Between the breathtaking beauty of ray tracing, the mind-blowing potential of bendable devices and the bright future of AR, smartphones are about to get a whole lot smarter. Imagination GPU and ray tracing technologies are enabling world-beating mobile products that help them stand out in a highly competitive and crowded market. We can’t wait for you to experience them.

Steve Evans has been working in the semiconductor and technology industry since 1985 and has held various senior marketing, sale and business development roles across several leading companies including Arm, MIPS (previously as part of Imagination), Hitachi and several start-ups and early stage businesses.

Telit announced a collection of its module families are now certified by Microsoft as part of its Azure Cer... 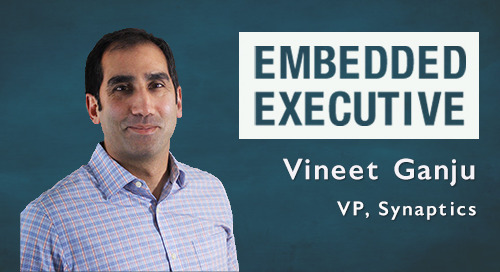