The demise of the reset button

Stuff goes wrong - it is a fact of life. Embedded devices are typically very reliable, but not immune to failure. A common failure mode is a lock-up - the device freezes and will not respond to any user interaction. This could be caused by either a software or a hardware problem. A device can perform a self-test and sometimes software can preempt its own failure, but freezes happen, and what do you do?

Not long ago, I was on vacation and rented a car. To me, a car is a tin box full of embedded systems. This vehicle had more than most, as just about everything was automatic: proximity sensors all round, keyless ignition, automatic door locking and unlocking, automatic lights – the list goes on. In the space of five days, I observed two failures:

Both these problems were fixed in the same way: turn off the car, wait and turn it back on again – in effect, cycling the power. They were both transient faults, as they did not reoccur.

Killing the power on a device is a little drastic, but it will very frequently address the problem of a freeze - at least temporarily, as the root cause may still be lurking. If the software was stuck in a loop, the resulting reset will cause the code to start over. If the cause of the looping was a software error, chances are that it will happen again. If it was a hardware fault - a peripheral not responding or a memory glitch - it may be transient, and the power cycle will have cleared it for good.

If the device has a power cord, then this drastic solution is a possibility. But what about the battery-powered devices that we all have: cellphones, MP3 players, digital cameras, GPS devices, TV/media remote controls? It used to be common for such devices to have a Reset button. This was typically recessed down a tiny hole and you would need a paper-clip to press it. It would normally have much the same effect as a power down - indeed, in some cases it might have actually interrupted the power, but I guess that asserting a general reset line was more likely. 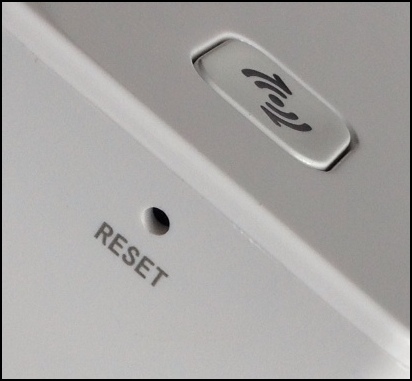 Modern devices have no such reset facility. I just scoured my house looking for an example of something that did, and it took a while. Nowadays, it is usually a matter of finding the instruction manual, which will suggest something like "Press the Menu and the Vol+ buttons and hold for 7-10 seconds." And, most of the time, the device is reset, and all is well.

But this new approach has two drawbacks. First off, you need to know what arcane button pressing/holding sequence to perform. Second, it might not work. I am unsurprised that this approach does sometimes fail, as it has an in-built complexity that leads to just one more thing to go wrong. The detection of two buttons being pressed and held for a specific time period requires either software (which may have crashed) or some somewhat complex hardware (which may also fail).

Fortunately, there is often another option: pop the back off of the device, remove the battery, pause for a few seconds, then replace it. However, this is not always an option. Bring back the Reset button is what I say!

By the way, coming back to my car problems. It was very odd that the gear shift behaved like it did, as I would expect the stick to be mechanically linked to the gear-box. Not so. It is just a glorified joy-stick, that is made to feel like a “real” gear shift and tell a computer which gear you want. I suppose that this means that the manufacturer can produce an automatic shift version (or even convert a car) by just installing a slightly different lever and changing the software.

PHYTEC is attending Electronica to demo the phyCORE-AM65x System on Module and a Rapid Development Kit base...