In modern power electronics conventional silicon semiconductors are increasingly being replaced by wide-bandgap (WBG) technologies based on Gallium Nitride (GaN) and Silicon Carbide (SiC). These demand a great deal from the passive components, especially the DC link capacitors. Addressing this demand, TDK has developed a dielectric that can handle high-frequency operation and be used continuously at high temperatures.

Combining a semicrystalline polypropylene with an amorphous cyclic olefin copolymer (COC) – which can tolerate high temperatures creates a dielectric (COC-PP) that can be used at temperatures in excess of 125 °C – with considerably lower derating, the dielectric capacitors retain good self-healing properties of BOPP. In addition, this enables extremely thin films of just 3 µm to be manufactured.

Film capacitors have a complex ESR, producing a frequency-dependent resistance caused by inhomogeneous impedances, skin effects, and winding geometries, leading to unwanted resonances and electromagnetic effects and heating of the capacitor. This has a particularly negative effect if the internal design of a capacitor consists of several windings. Different internal lead lengths and other factors then lead to a pronounced frequency-dependent current distribution across the individual windings.  TDK’s latest HF (high-frequency) power capacitors have an optimized internal design, so they can function well at the high frequencies and temperatures at which WBG semiconductors operate.

At high frequencies the HF power capacitors exhibit a dramatic reduction in power losses in comparison with conventional capacitors.

The B25640 * series of HF power capacitors are available with rated voltages from 700Vdc to 2200Vdc and capacitance values from 370µF to 2300µF. With the COCPP dielectric the capacitors can also be operated without voltage derating at temperatures of up to 125 °C. The capacitors exhibit an ESL of just 10 nH, so at high, rapidly-switched currents, their voltage overshoot remains very low, in most cases making snubber capacitors unnecessary.

Voice control is popular in consumer electronics. Adding it with a "wake word" is not possible, and without... 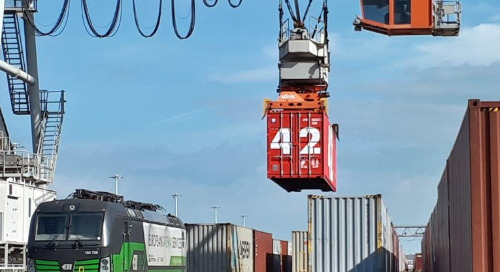 Traxens announced a partnership with the Port of Rotterdam in the Container 42 smart container project, whe...