Spectrum Instrumentation’s latest line of DN2.65x generatorNETBOX Arbitrary Waveform Generators (AWGs) is based on the LXI instrumentation standard, and has been created for engineers and scientists that need to simultaneously generate up to 16 precise electronic signals. While being released, users are offered a wide choice of configurations and performance levels. All six new instruments feature 16 bit digital-to-analog converter (DAC) technology and low-noise flexible outputs to allow them to generate almost any test signal in the DC to 60 MHz frequency range. 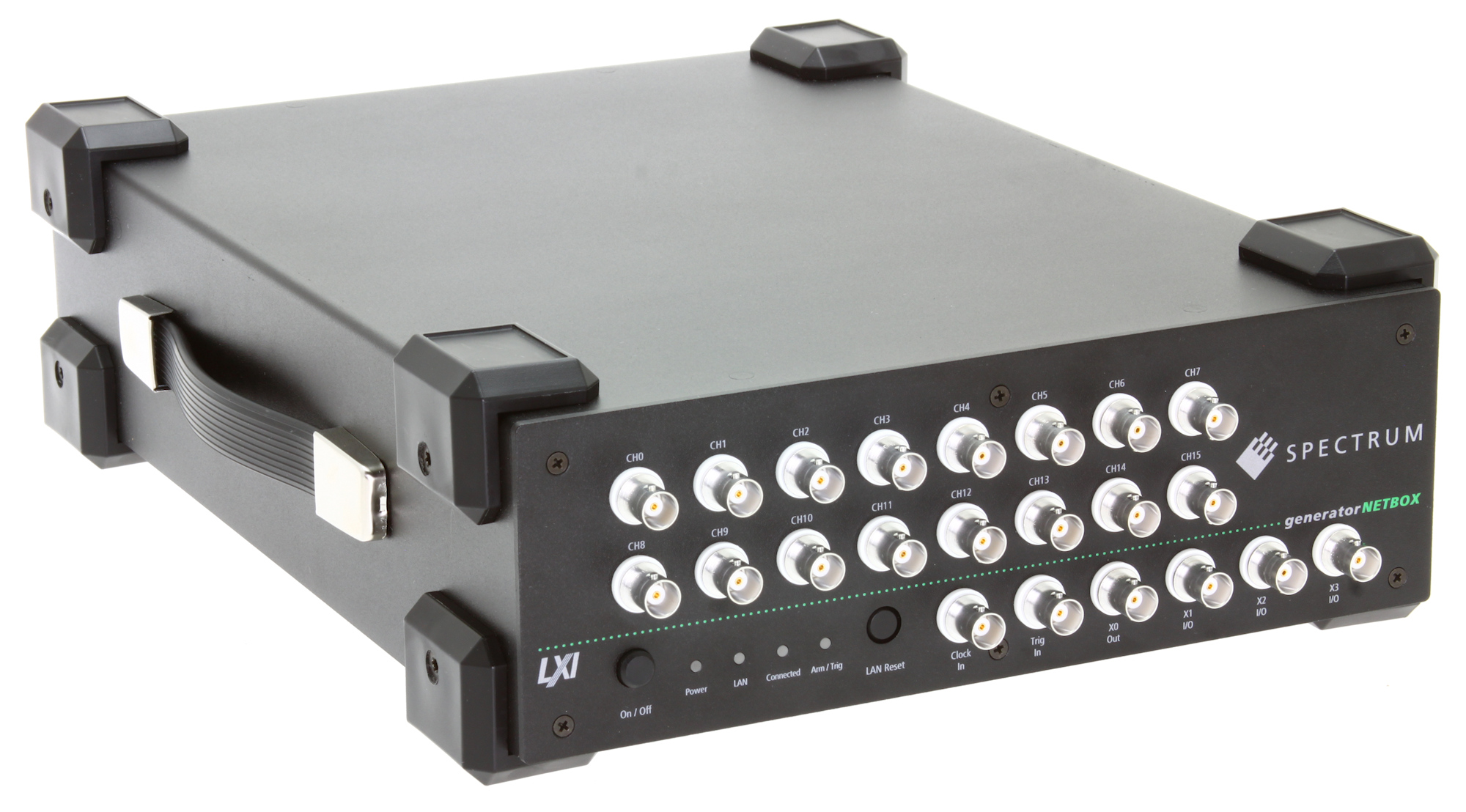 Full remote control is achieved through a simple Ethernet connection to any PC or local area network (LAN), and the DN2.65x series generatorNETBOX instruments are available with 4, 8 or 16 fully synchronous channels with output rates of 40 MS/s or 125 MS/s. Signals with a programmable output swing of up to ±6 V into high impedance or ±3 V into 50 Ω can be generated, and the units also include on-board memories of up to 2 x 512 MSamples that can be utilized in a number of different operating modes to allow the generation of long and complex waveforms. Signals can even be generated while new waveform data are being loaded to the on-board memory.

Each channel of the AWG is clocked using a phase locked loop (PLL) control system that can be generated internally or from an external clock or reference. Four different filters are available to optimize the output signal quality and dynamic performance. For example, Noise Spectral Density (NSD) is as low as -142 dBm/Hz, Total Harmonic Distortion (THD) is down to -74 dB, Signal to Noise Ratio (SNR) is as high as 90 dB and Spurious Free Dynamic Range (SFDR) is up to 97 dB.

The AWGs have front-panel multi-purpose I/O connectors that allow access to synchronous digital (marker) outputs, trigger output, run and arm status, the PLL reference clock, or asynchronous I/O lines. Weighing as little as 6.3 kg, generatorNETBOX products are portable and can be powered by an optional 12Vdc or 24Vdc source. The self-contained units come with all the tools necessary to generate waveforms, including Spectrum's SBench 6 Professional software. SBench 6 lets you control all the operating modes and hardware settings from a graphical user interface.

The software also has a host of built-in features for waveform creation, data analysis and documentation, and include an EasyGenerator function for producing wave shapes such as sine, rectangular, triangle, saw-tooth, SINC and DC. Waveforms can also be created from equations, imported from other devices (such as digitizers and oscilloscopes) or other software programs. SBench 6-Pro even allows data import and export in the most popular formats such as ASCII, binary and WAV. The units come with drivers, including C++, Visual Basic, VB.NET, C#, J#, Delphi, and Python code. Third-party software support is also provided for LabVIEW, LabWindows and MATLAB.