Smart sensors, from smoke to RF

This is part seventeen of a series. Read part sixteen here.

When I discuss the concept of wireless communications, I often ask people to tell me what the first wireless communications system was. I seldom get the answer I am looking for, as most do not understand my question. I generally give them the hint: “The Chinese invented it” (Note, I don’t know who actually invented it but it seems the oldest implementation I have seen is in China). Still perplexing the audience, I must volunteer the answer, which is: smoke signals. The Great Wall was built with towers at the mountain peaks, and the wall connected the towers from tower to tower through the valley.  The soldiers in the towers communicated from one to another using smoke signals.

The reason for this story is that too often we jump to the answer without thinking through the question. In a smart sensor, the communications method will take a significant portion of the power budget.  Therefore the method of communication with the aggregator needs to have the lowest power dissipation possible.

Many years ago we were looking at the concept of smart sensors. One of our team (Terry Schmidt) found a chart that had been made by Dr. Pister at UC Berkeley (circa 2005). I’ve included the chart here:

The chart plotted the amount of energy needed to transmit one bit of information 1 kM by various methods. Note I’ve added an additional piece or two of information – the energy required to execute one instruction in an OSD3358 System-in-Package device (about 1 nJ) and an ultra-low-power microcontroller (about 1 pJ). My conclusion? The architecture of a smart sensor would be driven by whether it took less energy to compress a bit of data than the energy to transmit a bit of information. Of course this is an oversimplification, as there are many other trade-offs that will need to be considered when designing a smart sensor.

My thoughts on smart sensor communication are:

Now, let me ask a couple of questions for you to think about: 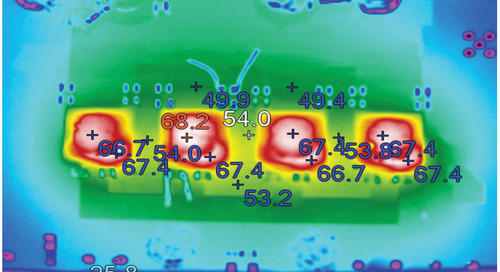 How to choose cool running, high power, scalable POL regulators and save board space

IC designers often avoid dealing with the dreaded topic of heat — a job that usually falls to the package e...