December 17, 2018 Colin Walls, Mentor Graphics, Embedded Division
Some technologies, it seems to me, should not really exist. They do, however, because they address a specific need. Typically, such technologies stretch something to make it perform in a way that was not originally intended. An example would be the fax machine. In a paper-based office environment, there was a frequent need to move documents from A to B. Initially, this resulted in the mail. But fax was an ingenious way to use phone lines to deliver a similar result, albeit in a very inefficient way. As soon as email became widespread, fax disappeared almost overnight, except for the NHS here in the UK, who are still big users. I have heard it called “Tyrannosaurus Fax,” which says a lot.

The technology that I have in mind today is hypervisors, which are a software layer that enables multiple operating systems (OSs) to run simultaneously on one hardware platform. Hypervisors aren’t really a new technology; the first recognizable products were introduced on mainframe computers nearly 50 years ago. The incentives at that time were to make the best use of costly resources. The expensive hardware needed to be used efficiently to be economic, and downtime was expensive. Software investments needed to be protected, so facilitating seamless execution on new hardware was attractive. An interesting irony is that IBM's early virtualization software was distributed in source form (initially with no support) and modified/enhanced by users; this was many years before the open-source concept was conceived. Now, hypervisors are increasingly relevant to embedded developers.

The first question to ask when looking at the capabilities of any technology is, why? What’s the benefit of running multiple OSs on one piece of hardware, bearing in mind that this introduces significant complexity? The most important answer is security. A hypervisor provides a strong layer of insulation and protection between the guest OSs, ensuring that there’s no possibility of one multi-threaded application interfering with another.

A secondary, but still significant motivation to run multiple OSs is IP reuse. Imagine that there is some important software IP available for Linux that you want to use in your design. However, your device is real time, so an RTOS makes better sense. If multicore is not an option (as that is another way to run multiple OSs on one device), using a hypervisor is the way forward, so that you can run Linux and your RTOS.

Hypervisors broadly come in two flavors, which are imaginatively named Type 1 and Type 2. Type 1 hypervisors run on bare metal; Type 2 require an underlying host OS. Type 1 makes the most sense for the majority of embedded applications. I attended a conference session recently, where the speaker referred to Types 0, 1 and 2. Type 0 seemed to equate to what I would call Type 1 and I could not figure out the difference between his Types 1 and 2. Clearly, care is needed with the interpretation of terminology in this space.

There are broadly three application areas in which an embedded hypervisor finds its place:

I said that a hypervisor enables multiple OSs on one hardware platform, implying that this meant a single processor. In fact, many hypervisor products support the use of multiple CPUs, with the hypervisor providing overall supervision and inter-OS communication. This is becoming the most important context in which hypervisors contribute to the design of complex, yet reliable, embedded software.

McObject(r), developer of the ultra-fast and scalable eXtremeDB(r) database management system, has recorded... 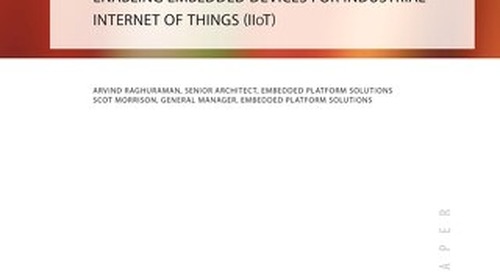 This paper seeks to outline a few of the key architectural considerations required for the successful opera...