The industrial PC (IPC) market has been dominated by x86 processors for the last 30 years, which should come as no surprise considering its roots in the desktop PC. From fanless rugged box computers to industrial board standards like PC/104 and Mini-ITX, the x86 architecture provided a wealth of proven interfaces, drivers, and software support that accelerated the growth of the industrial computing industry.

However, many of today’s Industrial IoT deployments require something slightly different. Rather than the ever-increasing clock and bus speeds that x86 processors have delivered for decades, Industrial IoT systems sometimes require lower power, more connectivity and security, and, in some cases, mobility. This has led to increased interest in Arm-based IPC solutions in recent years, from both OEMs and their clients.

Here in Part 1 of this two-part blog, I’ll look at efficiency verses performance, and your connectivity options. Then next week in Part 2, I’ll dive into software and operating-system support, and the costs involved with each architecture—the overall system costs, not just of the CPU itself.

Selecting one architecture over the other has significant design implications, both now and in the future. Although Arm processors are renowned for their relatively low power consumption compared to x86 counterparts, the best way to quantify this advantage is to evaluate processors in the same performance class deployed in similar systems. For this exercise we’ll use the WINSYSTEMS SYS-398Q-2G-0 and SYS-405Q, based on NXP’s quad-core Arm Cortex-A9 i.MX 6Q processor running at 800 MHz and the quad-core Intel Atom E3845 clocked at 1.91 GHz, respectively. 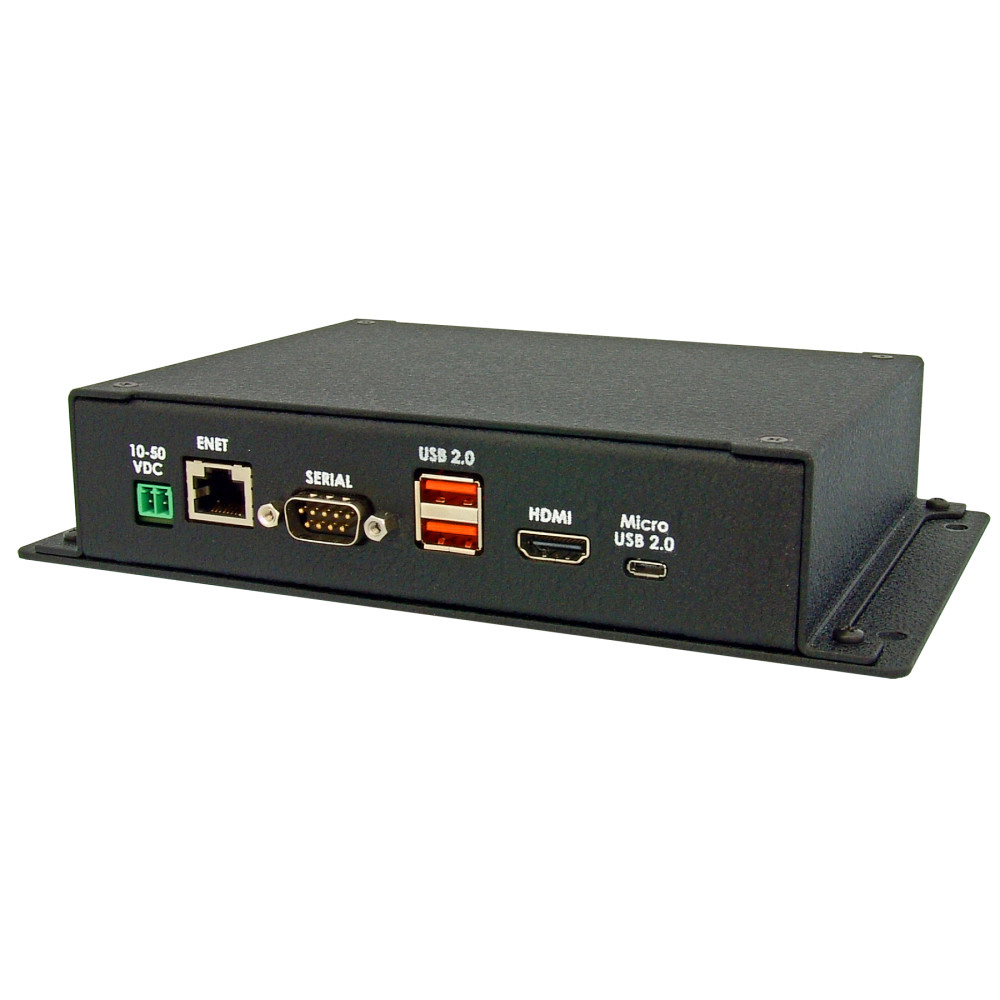 Of course, many factors contribute to the practical power consumption and energy efficiency of modern processors, including the operating system, current workload, idle/sleep modes, and so on. To get an accurate comparison of the devices in question, we turn to findings from PassMark’s www.cpubenchmark.net, which runs the following tests on available processor cores:

Using thermal design power (TDP) as a unit of expressing how much power the Arm and Intel processors consume under real-world workloads, the NXP part returned a score of 7.5 W to the Atom’s 10 W. 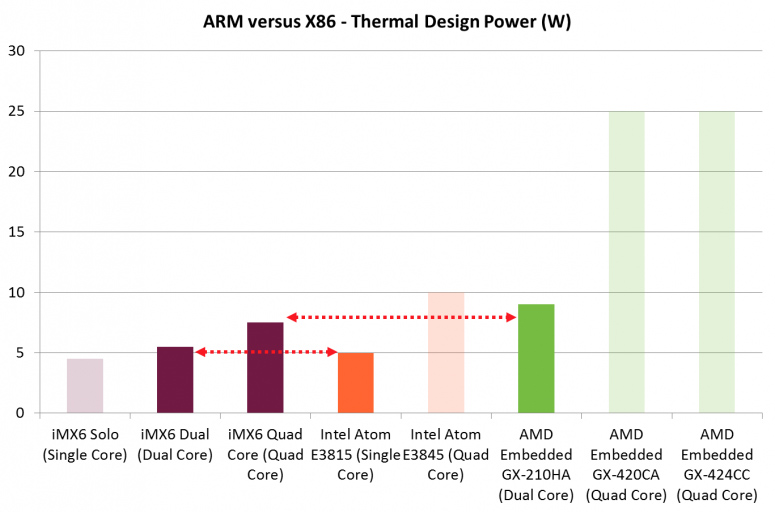 But simply measuring TDP is not sufficient for most designers, as they are primarily concerned with how much performance they can extract from a device at relative power consumption. Again, turning to a cpubenchmark.net performance test, we find that the Intel Atom device yields a PassMark benchmark score more than double that of its Arm-based counterpart. 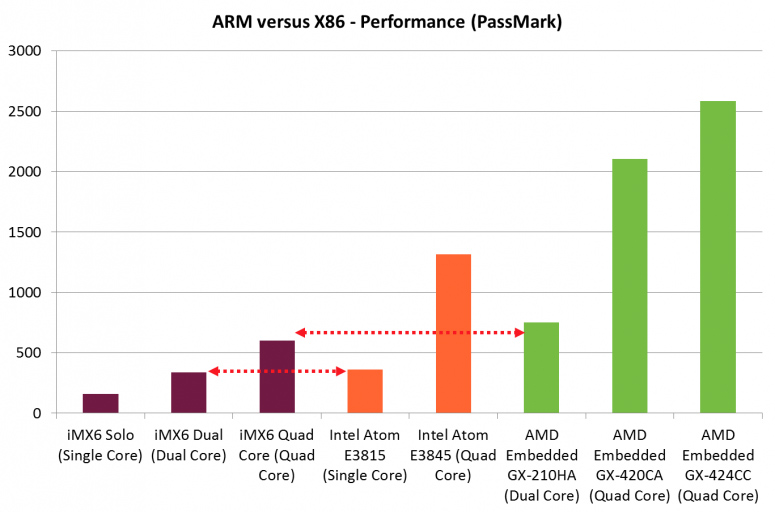 These two tests would suggest that the Intel Atom E3845 delivers more than 1.5x the performance per watt of the i.MX 6Q. Even within the benchmark, though, tests can be more advantageous to one type of processor. For example, the i.MX 6Q scored a 2370 on the EEMBC’s CoreMark benchmark, while the Atom E3845 is not listed.

Another perceived advantage of Arm-based systems is extensive connectivity, derived from the architecture’s mobile origins. Deconstructing the NXP and Intel-based system-on-chips (SoCs) further gives us a look at the native I/O on the platforms, as well as how industrial engineers can make use of it.

While this is a nice general-purpose starting point, industrial engineers may want more or different connectivity supported natively on their processor to reduce bill-of-materials (BOM) costs and integration work. Here, the NXP i.MX 6Q provides a range of more targeted I/O, including Ethernet and CAN interfaces. 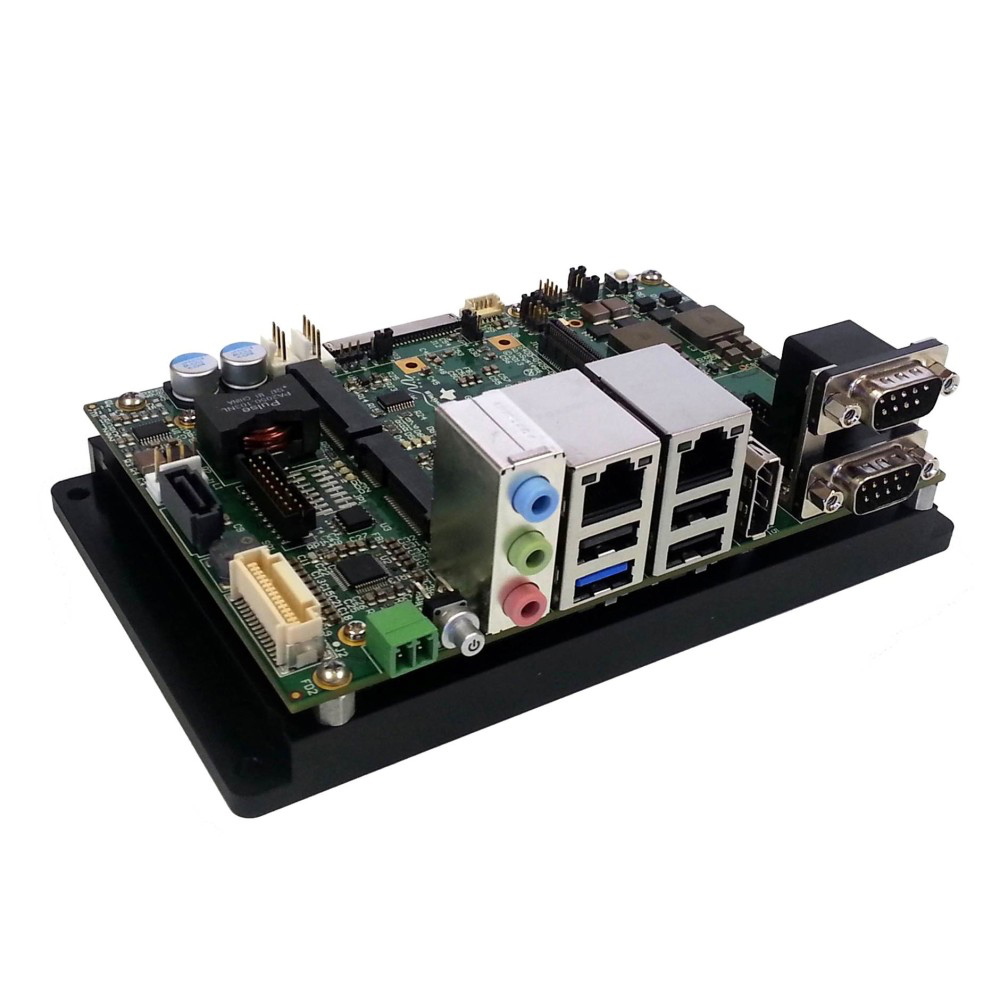 What should you make of this? Well, that mostly depends on your product design requirements. Adding components to support specific interfaces can affect procurement and BOM costs on either solution. So matching the product connectivity needs to the native I/O of the processor itself may be advantageous for your design team.

George Thomas “G.T.” Hilliard joined WINSYSTEMS in 1994 and has over 25 years of professional experience assisting clients to solve technical challenges. George has a BS in Electronic Engineering Technology and previously worked at a Fortune 500 company where he provided technical support for industrial control and sortation systems. Starting as an Application Engineer, George now leads the sales and marketing departments where he continues to enjoy supporting clients in solving technical and business challenges.