Home » Home Page » 5G: Where We’re at and What to Expect
× Share this Article

If you haven’t caught on to the 5G craze yet, I’d assume you’re living under a rock. In the embedded tech world, talk of a 5G-filled future comes up in just about every conversation, in one way or another. Despite all of the excitement, it’s difficult for some people to pinpoint exactly what role the 5G rollout will play and what challenges it’ll bring.

Daniel Quant the vice president of product management and strategic marketing at Multi-Tech Systems spoke in depth about the 5G rollout, its benefits, and the difficulties it may bring.

“The key benefits are enhanced broadband data speeds, estimated at well over 1 Gbit/s, lower latencies mostly at less than 10 ms and targeted at sub 1 ms with ultra-reliable connectivity for industrial mission critical assets (to be included in 3GPP Release 16, expected in mid-2020).” He continued, “Plus far higher density of low-power, lower bit rate machine connections, many running on batteries for years, often referred to as massive machine connectivity (to be included 3GPP Release 17 expected by 2022).”

The applications that will implement 5G are vast, and they range across a great number of different markets. While initial applications that benefit from 5G New Radio (5G-NR) are media focused, it has also been integrated in many complex systems such as autonomous vehicles and remote patient surgeries. 5G-NR is the global standard for a unified, more capable 5G wireless air interface. It will deliver significantly faster and more responsive, mobile broadband experiences and extend mobile technology to connect and redefine a multitude of new industries.

“My opinion is that industrial transformation, which is well behind the digital transformation enjoyed by most every smartphone consumer is the real game changer for 5G; connecting machines and workers for greater process efficiency and improved data driven decision making,” Quant said. “Much of this will be deployed privately by industrial enterprises. Think oil and gas, utilities, real-estate owners, and transportation for improved network performance targeted at sub millisecond ultra-reliable connectivity for mission critical assets and services.”

There’s no denying that there will be improved data speed and reduced latency targeting consumers as early 5G-NR networks mature, but while it’s in infancy, there are still a plethora of challenges that need to be addressed.

He also notes that we need to learn how to virtualize more of the core network on premise and employ network slicing of infrastructure to optimally connect a diverse variety of assets. Low bit-rate sensors require long battery life, often in difficult to reach places versus enhanced broadband and sub-millisecond latency time series networks for mission-critical control automation.

Despite some of the challenges we’ve mentioned, 5G is here, and it’s going to continue to grow. But there is still a key unanswered question: Who will manage the private networks, traditional service providers, or an enterprise IT team?

Quant concludes with, “3GPP 5G New Radio is very much a standard process in action and will be for many years. Almost like a TV show, each year brings a new series or Release. Each series consists of new episodes or Work Items that address key features such as latency, mission criticality, and machine connectivity. It will take time for industrial applications, which have the most to gain from 5G, to realize the economic and customer value that it bring.” 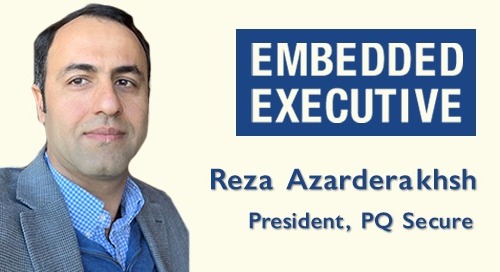 Sometimes it takes some extreme measure to ensure the security of your device. Those extremes include quant...