Back in 2011, LG and HTC launched 3D phones in the mobile phone market. With these first smartphones equipped with a dual camera setup, the trend soon faded away. Later, in the next consecutive years, LG, Apple, and Leica also attempted to bring new smartphones with 3D camera into the market. The recent past has seen escalating demand for a reliable generation of 3D models of both environment and objects.

With a wide range of innovative and interactive features, today’s smartphones present numerous opportunities for 3D modeling. Recent research on the smartphone 3D camera market highlights significant upsurge in the adoption of high-end smartphones with 3D content, among businesses in the media and entertainment industry. The high resolution of these 3D cameras is equivalent to that of hand-held cameras. There are smartphone 3D cameras, which can efficiently record as many 3D measurements as a quarter million, and provide real-time 3D modeling of the measured objects, each second.

Leica Camera recently announced its association with pmdtechnologies ag, which has been a leader in Time-of-Flight (ToF) sensor technology. This alliance aims to bring in a 3D sensing camera for modern smartphones with a small-sized lens, and predictions show that the near future might witness the emergence of smartphones equipped with cameras that have small-sized lens. The 3D sensing imaging system these two companies have designed has already been made available for manufacturers of smartphones, for integration in their upcoming models.

RED set to launch 3D camera for Hydrogen One

RED partnered with Lucida earlier this year with an aim to design an 8K 3D camera that would enable users to view live 3D content on Hydrogen One's holographic screen. While Lucid has been best known for its flagship consumer camera, LucidCam, the technology used in the camera to click 3D VR photos and shoot videos may now be seen in RED’s Hydrogen One smartphone camera.

Depth-sensing to remain at the forefront

3D cameras in smartphones are based on either stereoscopy technology or ToF technology, of which the former has been supporting a majority of smartphone models – owing to this technology’s high precision, reliability, and the capability to deliver high picture quality. Smartphones equipped with 3D camera, which are currently available in market, have advanced depth sensing capability, and the ability to notice movements occurring while capturing photos. They can also self-enhance the quality of pictures.

Additionally, innovative features such as super-improved performance, HD quality of picture clarity, and real-sensing capability, are further playing a vital role in popularizing sales of 3D camera equipped smartphones among the millennial population worldwide. However, industry experts reaffirm the fact that high price point will continue to be a barrier, which is attributed to the basic requirements of 3D cameras such as high quality lenses, advanced sensors, and high configuration. Also, the most commonly observed compatibility issues with various types of smartphone models will continue to limit sales of smartphones with 3D camera in the long run. 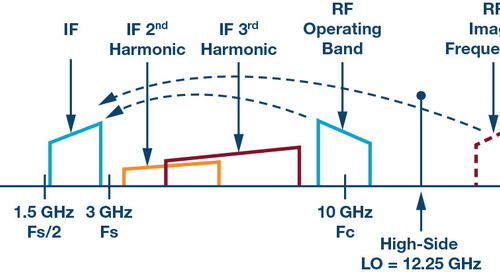 The high-speed ADC is a primary design consideration in all wideband EW receivers and largely determines sy...

The LT8642S reduces EMI emissions with its controlled switching edges and its internal construction using c...