NASA set a new distance record for CubeSats this summer when a pair of CubeSats called Mars Cube One (MarCO) reached 621,371 miles (1 million kilometers) from Earth. One of the CubeSats, called MarCO-B used a Gumstix  Caspa VL camera with a fisheye lens to snap its first photo on May 9, 2018. That photo is part of the process used by the engineering team to confirm the spacecraft's high-gain antenna has properly unfolded. 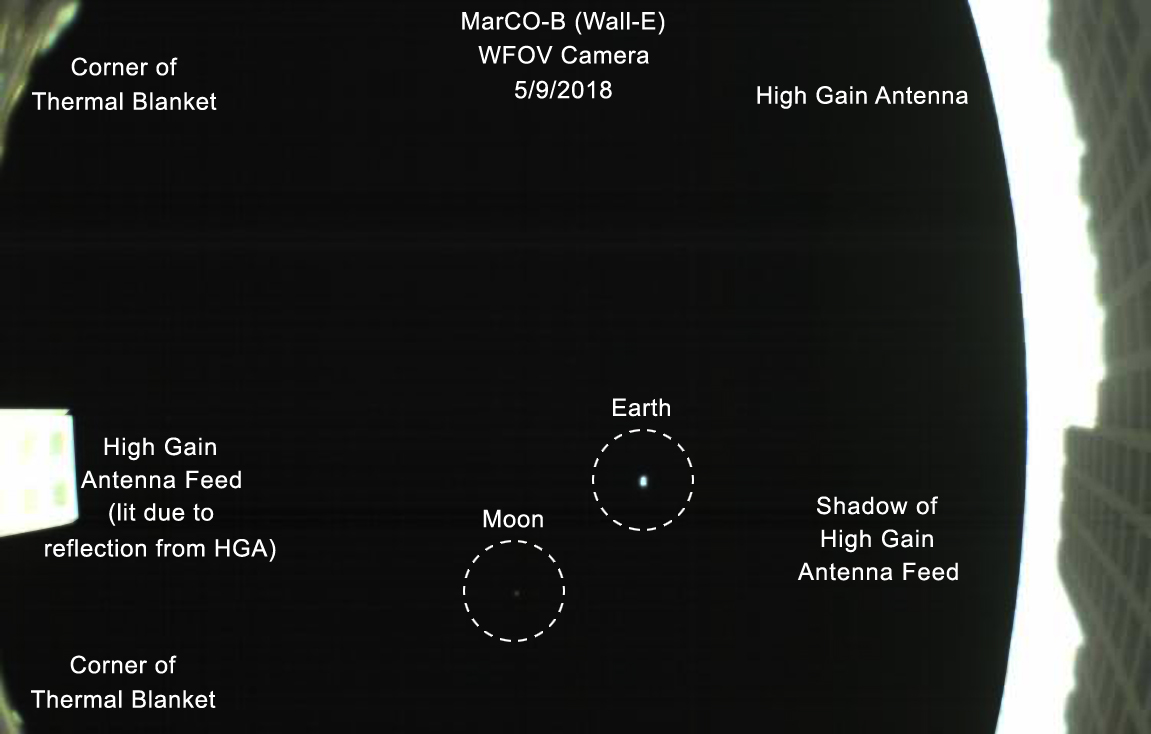 The first image captured with Gumstix Caspa VL camera by NASA's Mars Cube One (MarCO) CubeSats. The image, which shows both the CubeSats unfolded high-gain antenna at right and the Earth and its moon in the center, was acquired by MarCO-B on May 9. Image Credit: NASA/JPL-Caltech.

The MarCO spacecraft, each with a Gumstix Overo IronSTORM-Y on board, are the first CubeSats ever launched into deep space. Most never go beyond Earth’s orbit; they generally stay below 497 miles (800 kilometers) above the planet. Though they were originally developed to teach university students about satellites, CubeSats are now a major commercial technology, providing data on everything from shipping routes to environmental changes.

Launched in conjunction with the Mars InSight lander mission and developed by NASA’s Jet Propulsion Lab (JPL), MarCO-A and B will follow the InSight lander to Mars and, if all goes well, will perform a fly-by as the lander makes its descent.

If the MarCO CubeSats make the entire journey to Mars, they will attempt to relay data about InSight back to Earth as the lander enters the Martian atmosphere and lands. MarCO will not collect any science, but are intended purely as a technology demonstration. They could serve as a pathfinder for future CubeSat missions.

The MarCO and InSight projects are managed for NASA's Science Mission Directorate, Washington, by JPL, a division of the California Institute of Technology, Pasadena.

Keith Lee is a computer engineer and Gadget Guru at Gumstix Inc. He has a BASc and MASc in computer engineering and has a keen interest in embedded systems, SoCs, computer architecture, and logic design. Keith enjoys designing and creating tutorials for the latest IoT devices. You can follow his blog at gumstixgadgets.blogspot.ca.

Newark element14, the Development Distributor, is providing customers with more affordable alternatives on ...

Building a more secure world is a goal for any ISA. RISC-V is actively doing something about it.