An A/D (Analog-to-Digital) converter, frequently abbreviated as ADC, accepts an analog voltage at the input and produces a digital representation of that voltage at the output that’s called a “sample”.  The two primary characteristics of A/Ds are the rate of conversion or sampling rate, expressed in samples per second, and the accuracy of each digital sample expressed as the number of binary bits or decimal digits per sample.

Sampling rates vary tremendously between applications. A digital medical thermometer may deliver samples to update the readout once every five seconds while a high-speed wideband radar may produce 2 billion samples per second. The difference in sample rates between these two prominent examples is a staggering 10 orders of magnitude. There are thousands of A/D applications spread continuously throughout this range.

To help define the meaning of “high-speed A/D” used in this handbook, we will be focusing primarily on A/D converters with sampling rates higher than 100 MHz. We will review sampling techniques, FPGA technology and we will present the latest Pentek high-speed A/D products and applications based on them.

The Heart of the Matter: Reducing Noise in Wearable Heart Rate Measurement Applications

Pixus Technologies, a provider of embedded computing and enclosure solutions, has developed a new line of 3... 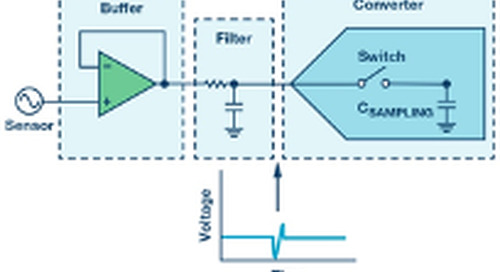