Will MCAP mean the end of resistive touchscreens?

Resistive touchscreens arguably should have been resigned to the technological scrap heap alongside ZIP drives and dial-up modems long ago. However they still cling on in industrial applications, despite their inherent unsuitability and fragility. Why is this? Some would argue it is price. Sadly, in today’s world of ever tightened purse strings, those specifying such human-machine interfaces will blindly snatch at the smallest of cost-reductions at the expense of (what should be) our industry prerequisites of robustness and operational lifetime.

However, this isn’t the primary reason resistive remains ubiquitous in these industrial applications. The reality is that, despite its successor PCAP’s apparent total superiority, it suffers one fatal flaw. Traditional PCAP touchscreens rely on detecting electrical impulses in your fingers so, you guessed it: they don’t support users wearing gloves. That last statement isn’t strictly true, the sensitivity of PCAP detection does permit thin latex gloves and consumer winter gloves with conductive thread, but these naturally aren’t the type operators typically wear in factories.

Chicago-based Itron TFT promises to eliminate this fatal flaw which could signal the beginning of the end for resistive in industrial applications. Meet the Metallised Projective Capacitive Touch (MCAP). 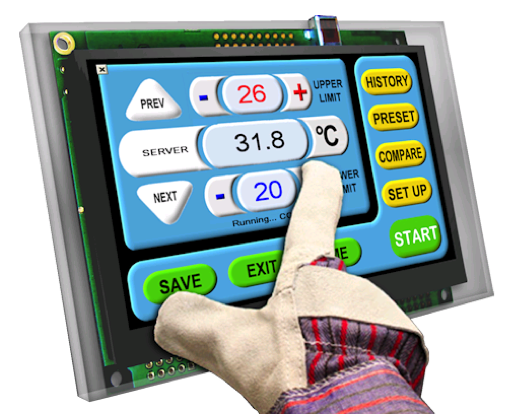 Employing either a low-cost 4 mm plastic or (far more interestingly) an 8 mm glass overlay with industrial impact resistance, the MCAP technology finally allows operators to wear all kinds of factory gloves from nitrile to thick leather. Traditional PCAP technology has also always been susceptible to touch inaccuracies in humid environments where screen condensation occurs, or indeed from direct splashing of liquid. Itron TFT demonstrate successful operation with both in this video.

So will this signal the end for resistive? From an availability perspective, resistive touchscreens will still be produced in low-cost consumer devices, so they won’t disappear altogether even if the industrial market finally says farewell. So far, MCAP touchscreens are only available in small sizes and the largest 7” format encompasses a fairly small share of the industrial HMI market. The current trend is towards employing the larger 21-32” 1080P HMI for ease-of-use and to provide the display real-estate that ever complex industrial HMI applications demand.

Resistive is also fighting back, with companies like Both Harvest Tech Ltd championing 9H hardened overlays to address its fragility. I myself have seen the plethora of resistive HMI’s flooding back for non-warranty repairs following encounters with biros, screwdrivers, and even Stanley knives. Their approach is to accept the inherent breakability of a resistive membrane but protect it with a robust yet flexible screen protector. As both technologies scramble in this arms race to negate their characteristic weaknesses, who will win out? PCAP stalwarts would argue the modern day demands the multi-touch capability which resistive simply can’t offer, but would industry actually use it?

Last week our Technology Editor, Brandon Lewis, announced the reboot of our development kit selector. Every...

The new generation of factory machinery across every manufacturing industry has an unprecedented level of i...