The rise of 48V mild-hybrid vehicles

Electric and hybrid vehicles are mostly industry initiatives with modest consumer interest and are largely aimed at driving new business models. So how will carmakers meet the stringent CO2 emissions targets being implemented by 2020? The mild hybridization of conventional cars with 48V battery has emerged as the most viable answer to this challenge in the near term.

The current 12V electrical systems in conventional internal combustion automobiles are reaching their 3kW power limit due to the ever-increasing demand for more electrical devices such as powertrain control, infotainment, and advanced driver assistance systems (ADAS). A secondary subsidiary electrical system running at 48V can complement the traditional power supply by offering the advantages of hybridization without the complexity associated with electric and hybrid vehicles. The mild hybrids are not electric vehicles because the wheels are not driven electrically. They are also significantly cheaper and can be added to traditional powertrains relatively easily by car OEMs. 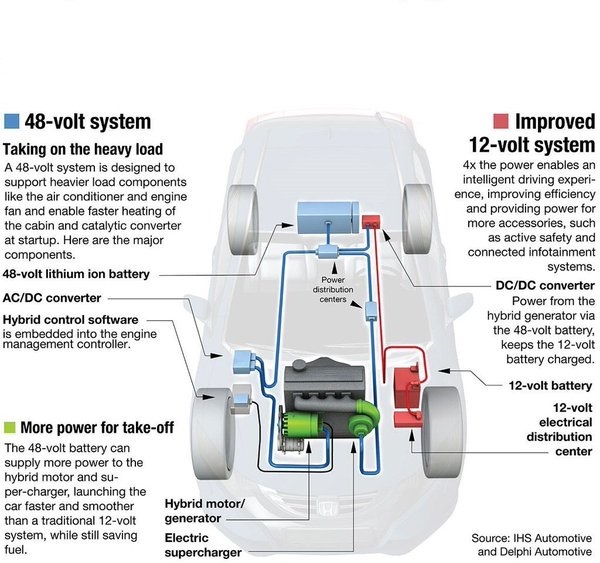 [A sneak peek at the 48V automotive system design.]

Delphi Automotive, a tier one automotive supplier, claims that mild hybrids can offer nearly 70 percent of the benefit of a more traditional hybrid — like fuel efficiency and CO2 reduction — at about 30 percent of the cost. The other notable suppliers developing 48V systems include Continental, Valeo, and Gustanski.

Delphi claims to have developed a 48V mild-hybrid system; it also boats to have bagged two automakers as its first 48V customers. The tier-one automotive supplier has telegraphed its intention to start production of this mild hybrid system by the end of 2017. Delphi asserts that the 48V battery system will cut emissions in common cars by 10 percent.

A dual 12V/48V system uses a low-voltage, conventional lead-acid battery and adds a 48V lithium-ion battery to it with a separate 48V network. The 48V mild-hybrid system comprises of a lithium-ion storage battery, a DC/DC converter that integrates the 12V electrical system, controllers for the battery, and hybrid powertrain; and an electrically driven turbocharger.

[Intersil’s evaluation board features a 6-phase 12V/48V bidirectional synchronous PWM controller that can boost 12V to 48V or buck from 48V to 12V.]

The initial 48V systems are mostly being designed around the powertrain, which leaves the rest of the electrically driven components to continue to operate on a 12V electrical architecture and conventional lead-acid battery. However, once that dual-voltage system is in place, carmakers can start moving more electrical components onto the 48V system.

The 12V network will mostly likely continue to handle traditional loads like lighting, ignition, entertainment, audio systems, and electronic modules. On the other hand, the 48V network will support devices such as active chassis systems, air conditioning compressors, and regenerative braking.

Majeed Ahmad is former Editor-in-Chief of EE Times Asia. He is a journalist with an engineering background and two decades of experience in writing and editing technical content. He is also the author of six books on electronics: Smartphone, Nokia’s Smartphone Problem, The Next Web of 50 Billion Devices, Mobile Commerce 2.0, Age of Mobile Data, and Essential 4G Guide. 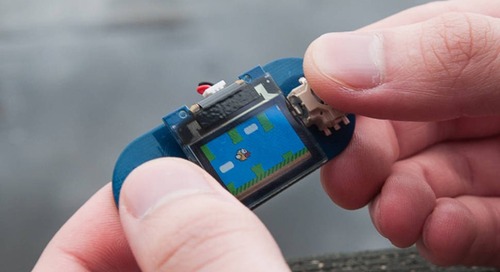 Make your own video games with these MakerPro gaming solutions

If you're reading this, it's likely you grew up with video games, or at least have been exposed to them for...