Taking the dev kit from prototype to solution

Development kits, aka dev kits, are driving innovation in a number of areas. From wireless and sensing, to the IoT and power management, dev kits are an essential part of the early stage design process, enabling engineers to test their designs quickly and cost-effectively. Their position as an essential part of a designer’s toolkit is firmly entrenched. Research with 1500 designers to explore how they approach the design process revealed that 89% used dev kits to experiment with new systems.

However, dev kits aren’t only being used to prototype designs. Along with single-board computers (SBCs), they’re empowering private innovators too, particularly in the IoT) space, which includes interactive smart-home networking. Because of the complexity of IoT systems, which usually include sensors or other modules that communicate wirelessly to other devices and the cloud, suppliers are increasingly called on to offer end-to-end solutions that simplify the process of getting multi-platform IoT ecosystems up and running.

As such, not only have IoT designs triggered a democratization of the manufacturing industry, but also produced a shift in the relationship between distributors and their customers. It’s no longer enough for distributors to simply supply individual components, because customers now demand complete solutions that support them through the entire design process.

The availability of ready-made, fully tested boards means that engineers are no longer merely using dev kits and SBCs to test their ideas. Instead, they’re integrating them directly into their designs. This significantly reduces development time and cost, enabling designers to get their finished products to the market faster. In fact, we found that 80% of designs that used a dev kit reached production within 12 months.

Two SBCs that have been particularly successful recently years are the BeagleBone Black and the Raspberry Pi. With their ability to work as stand-alone computers in their own right, extensive support from manufacturers and an affordable price point, more resellers than ever are stocking them. This has resulted in wider availability to people with all levels of engineering and development skill, from hobbyists to professionals.

The element14 community’s recent Pi IoT Smarter Spaces competition demonstrated the versatility of the Raspberry Pi 3 dev board. The challenge focused on creating a command center to control all the IoT devices in a favorite space, whether it be at home, work, or outdoors. The winning design was a voice-controlled smart home interface for energy monitoring, security, controlling home appliances, and even entertainment, though other designs in the competition showed the dev board’s impressive flexibility. These included a Plant Health Smart Camera solution that monitors plant growth and health via the Internet, and a remote horse feeder system that could keep Trigger fed and watered.

The Future of the Dev Kit

The survey showed that 76% engineers agreed that dev kits were critical to encouraging innovation in modern design. As such, it’s difficult to ignore the fact that the future of the dev kit is closely linked to the future of the electronics industry itself. While dev kits used to be simple tools to test ideas, they’re now injecting life into prototypes that would have been historically too expensive to risk pursuing.

The kits are also extending technology into applications, use cases, and new audiences that are far from traditional computing scenarios. The recent element14 community Safe & Sound Design Challenge featured the Texas Instrument MSP432 Launchpad as the foundation for building wearable technologies that can protect people from personal or environmental risk. In addition to engineers, the competition was open to apparel designers, who could incorporate Launchpad connections into smart garments. As examples, contestants designed garments that could monitor a number of real-life conditions, such as vital health statistics, physical location, methane gas concentration (for miners) and worker safety in auto toll booths.

Ensuring that real engineers’ opinions are being fed back into the manufacturing process is crucial to the future of dev kits. For example, our research revealed that, alongside a continued desire for technologies that make life easier, there’s also keen interest within the healthcare, environmental, and renewable energy sectors. Manufacturers need to consider this information when planning the functionality of their future dev kits.

For example, energy efficiency is a requirement in most IoT designs, as devices are often far from traditional power sources. Creating kits that require little power or can harvest their own energy, is critical for many projects. The element14 community’s Vertical Farming Challenge, based on Silicon Labs EFM32 Zero Gecko Starter Kit, focused on solutions to grow fresh food in urban areas. The winning entrant was the Modular Farm Project, an urban farming solution that employed an artificial intelligence vision system for garden monitoring. Moreover, the system was able to generate, harvest and store energy locally using a solar panel, a battery pack, and auxiliary hardware modules.

Smart home and IoT systems also rely on energy-efficient components, but end-to-end dev kits that address these opportunities must make it easy for designers to configure features such as capacitive touch buttons and provide audio-to-haptics feedback. They must also integrate seamlessly with sensor and input systems that usually rely on wireless networking. And it’s no longer enough to offer just WiFi and Bluetooth; IoT gateways need to be universal, and should include popular industry standards.

As an example of the system-building IoT and smart-home components coming on the market, the Matrix Creator is an open-source voice platform for developing computer vision and voice-actuated smart home applications on Raspberry Pi. In addition to eliminating most wiring and simplifying packaging when designing custom hardware applications, Matrix Creator extends the Raspberry Pi board with multiple connectivity and communications protocols, including Thread, ZigBee, Z-Wave, NFC, and Android Things support that enable makers to create DIY Alexa-like voice-driven networks. It also features a complete array of modern MEMS sensors to allow development of any number of node or end-point sensing options.

The Components for Complete Solutions

Using these low cost, ready-made boards and new ready-to-integrate components with specialized functionality, designers and independent communities are developing products at the forefront of innovation. And they’re getting to market faster than ever before. However, this level of adoption and innovation will not sustain itself forever.  Manufacturers must continue evolving their product offerings while consulting with engineers to ensure that they’re aligned with the required components and features.

Cliff Ortmeyer has an electrical engineering degree and has worked in the electronics industry for 26 years in various engineering and marketing management roles. He’s been with Premier Farnell for six years, most recently as the Global Head of Technology Product Marketing and Solutions Development. Cliff holds multiple patents and is an electronics enthusiast who has a passion for understanding and leveraging new technologies. 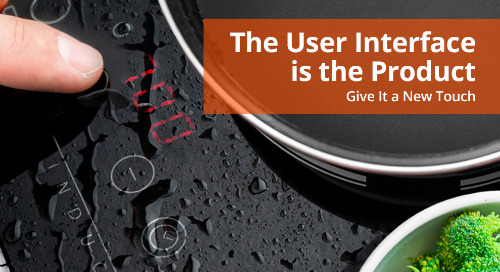 A new “touch” for the modern user interface

Performance testing is a non-functional testing technique to determine the system parameters in terms of re...