Vehicle manufacturers provide a useful example; particular models were (and still are to some degree) mass produced in regular but discrete production runs – if the exact specification you desire wasn’t, by luck, produced on a previous run, you’re likely to find yourself waiting a period of months until the next. Long lead times on new vehicles is something, like slow Internet access, we all accepted as a part of life, though as smart manufacturing technology has progressed that expectation is rapidly changing.

The expeditious evolution of smart manufacturing has been hugely influenced by advancing connectivity between production equipment, be that between one another or interfacing (in)directly with the Internet. However, we must also give due credit to the advances made in equipment flexibility and configurability, facilitating quick in situ reconfiguration to encompass deviations from the standard without rebuilding the production line effectively from scratch.

We’re ebbing closer to a future where tomorrow’s car buyer can specify exactly what he wants, down to the dashboard brightness, and that specification transmitted from buyer to production line instantly, negating any need for human involvement. Instantly reconfigurable connected robotics then build your specific vehicle outside of any production run – removing any need to wastefully build entire fleets of the same model speculatively – and deliver it to your door in a fraction of the elapsed time. This would be true “build-to-order” flexibility without the negatives.

Smart manufacturing doesn’t only place the conscious buyer essentially in control of manufacture. Market monitoring facilitated by IoT enables production to be driven by proven or anticipated market trends spontaneously, if you will, by a “subconscious” future buyer – one that will be influenced by events they’re not currently aware of. An obvious example is buying trends affected by the weather, be that ice cream, sunscreen, or poncho sales. Current practice tends to employ moving average manufacture fluctuating based on past seasonal trends. I purposefully cited the weather as my example as it is inherently unpredictable year on year; by collecting and using live meteorological data, scale of manufacture can move away from one of vague prediction to justified by tangible and live monitoring information. Humans again can be bypassed entirely and under and over stocking caused by perceived demand prediction based on purely historical data negated entirely.

Social media has long been ubiquitous on every computing platform, and real commercial benefit via integrated social advertising was always the next step. The advent of “S-Commerce” with targeted advertising on its own dictates (to some degree) buying trends, though arguably too late to dictate smart manufacturing reaction. However, the origin and exponential increase in trends themselves can be monitored, anticipating that near-future demand, which is then responded to. As an illustration, analyzing the average public perceptions of the next generation of 4K televisions can be fed back to manufacturers – the public’s current reservations around the lack of supported content translating to reservations on produced quantities from the manufacturers themselves. That same monitoring channel then feeds back when the time is right to ramp up production, leveraging from consumers’ attitudes directly.

At what rate humans will be prepared to hand over complete control to “machines”, akin to adopting autonomous vehicles, remains to be seen. However it’s apparent that today’s production manager’s role will migrate to one of approving increasingly detailed advice obtained autonomously, rather than gathering data and making such predictions and decisions himself.

IoT designs need to start in the right direction

If you're following the technical exchanges on the Internet of Things (IoT), there's a good chance you're o... 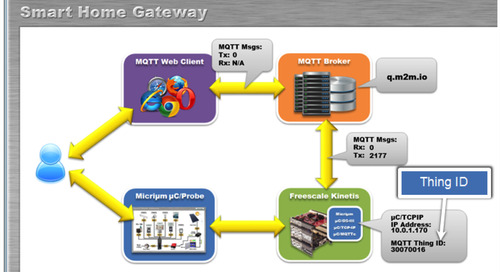 Before diving into a hands-on workshop, Christian Legare of embedded software vendor Micrium took some time...