Sensors Expo 2015: ROHM and Kionix on sensors as a "natural language"

Sensors are something most of us usually take for granted, whether it be the 3-axis accelerometer and 3-axis magnetometer that modify smartphone displays from portrait to landscape orientation, tire pressure monitors that alert us when we have a flat, or temperature/humidity sensors that inform us about about the wine in our wine coolers. Maybe we are already too immersed in the world of sensors to fully appreciate them, but what if sensors could talk?

John Chong of Kionix, which was acquired by ROHM Semiconductor in 2009, showed me a way.

With the advent of the Internet of Things (IoT) sensor immersion will only increase, but it will also open the potential for sensors in areas we haven’t used them – or thought to have used them – ever before. This includes places that are even more intimate than the examples I described above, such as wearables, credit cards, pens, and paperweights. Through the IoT sensors have the ability to go nearly anywhere and everywhere, and in response Kionix has developed a portfolio of flexible, affordable, extremely small form factor thin sensors that can be used in applications ranging from machine health to mobile phones (See this entry’s lead image. Can you see the sensors? It took a few snapshots to incorporate them because of the curvature of the card).

To make them talk, however, is a function of thinking differently. In a very cool demo, Chong showed how a cube integrated with the Kionix KX23H sensor hub could be used to control the functionality of a Bluetooth speaker through human interaction. Throw the cube up and you change the song. Put it down forcefully and the song stops. Move it side to side to adjust the volume. You get the idea. [Figure 1 | John Chong of Kionix tosses a cube outfitted with the KX23H sensor hub into the air to change the song on a Bluetooth speaker situated on the table on the right.]

Chong and his Rohm counterparts view this as “making sensors function as a natural language.” For more on IoT sensors, visit www.kionix.com. 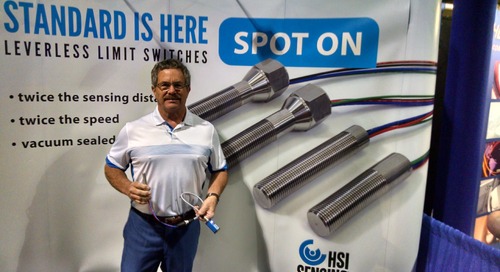 You can never count out experience when operating in critical environments, and HSI Sensing has nearly 50 y...