Regulating the Internet of Things

The technology industry is embracing the idea that the Internet is connecting devices through what is known as the Internet of Things (IoT). The IoT consists of embedded devices that interact with other embedded devices. The ability to connect your mobile device to your car, wearable health technologies, and/or home systems that can be adjusted through a mobile app are all examples of how the IoT works, but it does not stop there. This connectivity is becoming more common and as time goes on, more and more devices will continue to be connected. The next thing you know, devices will be independently communicating with one another without user intervention. According to IDC, by 2020, there will be 28 billion devices connected to the IoT, which by then will be generating around $7 billion per year in revenue. With this continuous growth in the number of connected devices, the question is not whether the IoT needs to be regulated, but how will it be regulated.

The Internet leaves space for information to be misused. With all these devices connected to each other, there lies the possibility of our personal information, locations, personal preferences, medical details, and other information being available on the Internet. It is only natural for policymakers to worry about the security and privacy issues stemming from all these connected devices. The United States Federal Trade Commission (FTC) appears to be taking a serious look into what kinds of regulatory steps are necessary for connected devices.

The IoT is only going to continue to grow, so it is crucial for both manufacturers and users to be aware of the privacy and security concerns. According to Maureen Ohlhausen of the FTC, “Because interconnected devices and services often collect and share large amounts of personal information, policymakers and members of the tech community must be sensitive to consumer privacy and data security issues. It is thus crucial that companies offering these products as part of the IoT act to safeguard the privacy of users to avoid giving the technology a bad name while it is still in its infancy.”

However, Ohlhausen was also quoted as saying that, “The success of the Internet, has, in large part been driven by the freedom to experiment with different business models, the best of which have survived and thrived, even in the fact of initial unfamiliarity and unease about the impact on consumers and competitors. It is thus vital that government officials, like myself, approach new technologies with a dose of regulatory humility.” With such a freedom to experimentation to be a part of the IoT, security and privacy may not have been top of mind for manufacturers. As the IoT continues to grow, experimentation can take place, but with a method that keeps customer’s privacy and data secure.

Although regulation seems logical and even necessary, it is not the easiest thing to do. One challenge in regulating connected devices is “figuring out how certain products, that lack a prominent consumer-facing screen like computers and smartphones do, can let consumers know about their particular privacy and data options.” Having an interface allows some type of communication between the device and the consumer. For example, your smartphone, computer screen, and even cars have the ability to let consumers know when the software on their devices needs an update. This also goes for communicating privacy and data options to the consumer. Without a consumer-facing screen, this proves to be more difficult.

Creating and maintaining an accompanying application for every connected device is a cost that may be prohibitive for the device-makers, but may be required in the short term. In the long term, as standards and/or regulations evolve, the connected devices could become self-learning, self-configuring and self-updating to consistently stay up-to-date with the most current security and privacy settings. Another challenge for the regulatory bodies is how to implement and regulate these 28 billion devices being manufactured around the world. This challenge is one of arguments that the free-market technologists are using to recommend that the technology and consumer acceptance drive the market, not the government regulators.

The technology industry believes that the IoT is the next big thing, but whether people realize it or not, this phenomenon is already upon us. Many people may be unaware of what the IoT is, and some people may not be completely convinced of how big it already it is, but it is happening whether we like it or not. The IoT has been proven to be beneficial – allowing consumers to track their health with wearable technology like the FitBit, connecting mobile phones to car infotainment systems to listen to music, sending alerts with detailed medical information to first responders in the case of an elderly family member’s medical emergency, amongst other ways. While people have been or are beginning to embrace the IoT, there is still a lot of growth and development expected in this industry. Part of that growth and development includes how government officials will regulate these devices in ways that will provide security and privacy of consumers and industry using these connected devices without stifling innovation. 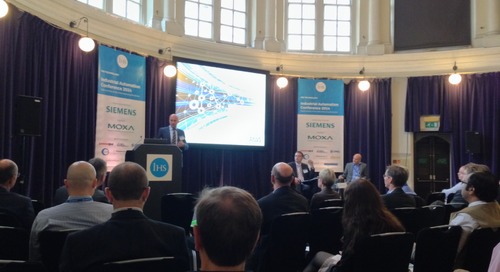 Building infrastructure for a smarter world at the Industrial Automation Conference

The IHS Industrial Automation Conference held in London in October 2014 demonstrated how the Internet of Th...