Makers create and fight on primetime

Engineers and makers got a primetime slot on TV again last nights with the premiere of a new season of BattleBots. With more than a decade of technological advancement and increased accessibility to engineering, I was interested to see how an old favorite show changed.

So far, though with only one episode in, not that much. The show aimed to give more background on the builders and the bots, but it was hard to get a good look at what their designs consisted of, besides shredded metal and other parts once the fights were underway. It seems a lot of the winning designs and weapon mechanics were the same – wedges, spinning blades, and flipping arms. There may be more engineered aesthetics added to the bots, but I’m hoping to see more weapon and functionality improvements in future episodes.

Several fan favorite builders and bots were back with updated designs or completely new builds, including Lisa Winters, who had a unique, fan-favorite design as a 13-year-old competitor back in the show’s initial run, and was back with a new bot in the current season. She in particular wanted viewers to see that anyone could build robots. She may have been a bit of an anomaly back in the old seasons, but I think there’s more age and ability diversity this time around. There are professional engineers participating – from Silicon Valley engineers doing consumer-facing projects to military robotics engineers in episode one alone – but the episode previewed teams of all ages, from up-and-coming highschoolers to those who have been building and fighting robots for decades.

It’ll be interesting to see how popular the series will be now that making is more accessible. And it’s an exciting introduction to anyone just learning about robotics who may become another maker.

And if robot destruction isn’t your thing, the DARPA Robotics Challenge recently concluded with some really interesting designs from around the world. 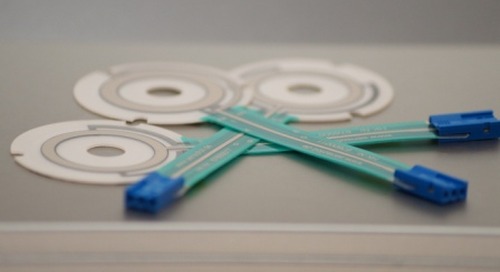 Jens Kautzor, CEO of Germany-based Hoffmann + Krippner, not only offered me an outlet to charge my phone, b...

My colleague Rory Dear did a brief pre-show write up on the Internet of Things (IoT) interoperability frame...