Electronica’s bi-annual return coincided with an exciting year in the embedded industry and welcomed an increased number of visitors from its 2012 outing to the tune of 73,000.

Historically Electronica has been considered the German exhibition for the German people, but this year saw a rapid increase in international visitors, for the first time on par with local countrymen.

Themes dominating the event included, unsurprisingly, the Internet of Things (IoT) alongside a more generic focus (if you’ll pardon the oxymoron) of “solutions”. Though surely every product or technology is indeed a solution, predetermined by its own existence in our marketplace?

“Solutions” in this context translates to our familiar concepts, fast time to market achieved by minimal development learning curves born from reduced risk by reducing complexity in the design process.

One argument being that today’s embedded engineers do not have the time to start designs from scratch, the other that companies are experiencing a resource gap and don’t have that necessary engineer to even have the option of starting from scratch!

Expanding on those key themes, Spansion announced their licensing of ARM’s high-performance Cortex-M7 processor, which will be integrated into the company’s next generation of MCU and systems products, an investment into the future of IIot (Industrial IoT) yet maintaining compatibility and scalability against their current diverse range.

Microsemi Corporation presented an embedded forum raising the obvious security concerns of the IoT future and their technological means of addressing this, the advanced security features present on their SmartFusion2 and IGLOO2 FPGAs.

Tim Morin, Director of Product Marketing detailed how the IoT infrastructure can be evolved to provide the required level of protection, waxing lyrical the variations and benefits between M2M Symmetric and Asymmetric key exchanges and maintaining the public key infrastructure.

element14 launched what they term the first “plug and print” 3D printer, marketed as a “micro-manufacturing” system. The Robox increases print speeds by up to 300 percent by utilizing a proprietary dual-head print nozzle; nozzles are also interchangeable to perform a range of functions, all designed to enable rapid mechanical prototyping without the tooling expense and lead times associated with standard prototype enclosure manufacturing.

Digi-Key continued the trend of rapid and supported electronic design development with its announcement of their new, expanded suite of EDA tools. Designed to enable today’s design engineer, particularly within SMEs who don’t necessarily have the latest PCB design packages, to integrate their range of components with minimal effort.

The design tool ecosystem, created by Aspen Labs includes Scheme-It, PartSim, and PCBWeb – complimentary tools aiding diagraming, simulation, and PCB design. Digi-Key claim more than 37,000 PCBs have been designed through this software. The real USP is that, once completed the design, one can purchase their entire bill of materials and order PCBs directly from within the tool.

The announcement that particularly grabbed me during the show came from Adesto, who are pioneering a new variant of resistive RAM termed “conductive bridging” – CBRAM. This claims to match flash in bandwidth and performance but with a fraction of the power consumption.

Evidently a key benefit in the rapidly evolving IoT market, the potential to have flash operating at these speeds with negligible power consumption is great news for sensors gathering data from factories to our own human bodies – a future where such devices require daily recharging becomes less of a dream and more of a nightmare, which such a technological advance avoids.

It seems the memory chip industry is finally moving beyond Moore’s law and Adesto see an opportunity to make ground up on the three memory behemoths who have dominated the scene for decades. 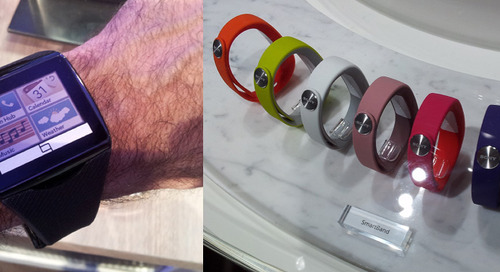 LDPC FEC is becoming the preferred technology in wireless backhaul