How narrowband IoT will connect our cities

Cities across the world are increasingly blanketed with public Wi-Fi networks, providing free or extremely low-cost citywide access to the Internet, as well as public services and information. The ultimate hope of many of these initiatives is to move towards a smarter, connected city where people can easily access the information they need at their fingertips; where utilities such as water, gas and electricity are metered and used efficiently; where urban drivers can find free parking spaces quickly and easily; where energy usage is minimized; and where traffic is coordinated efficiently, resulting in smoother traffic flows and cleaner air. But even as the benefits of Wi-Fi are becoming clearer, its limited ability as a technology to deal with next generation IoT applications such as wireless utility metering, automatic parking coordination, intelligent waste management, and transportation coordination are also becoming apparent. To deal with these issues and more, another technology is needed.

One of the most promising wireless technologies to emerge recently is narrowband IoT (NB-IoT), which solves many of the last-mile issues of Wi-Fi. Recently standardized by the 3GPP, NB-IoT is a cellular technology which uses much less power than Wi-Fi, has greater range, and lower cost components, making it an ideal technology for large deployments of small, battery-driven sensor devices in urban environments.

By using narrowband radio technology, NB-IoT trades off bandwidth for transmission range and energy efficiency. Whereas Wi-Fi devices have a typical range of 30 meters, NB-IoT devices can transmit messages up to 30 kilometers. Battery-powered NB-IoT devices can potentially last for years on a single charge. In addition, the narrowband frequency allows NB-IoT to penetrate the walls, floors and other obstacles that populate urban settings. All these characteristics make NB-IoT the ideal technology for urban applications like utility metering, smart parking systems, waste management, lighting control, and more.

The smart, connected city isn’t just a pipe dream – NB-IoT is being trialled in Spain and Norway, with promising results.

In early 2016, Aguas de Valencia partnered with u-blox and Vodafone to test the use of NB-IoT technology to improve its water metering system. While Aguas had been using automated metering before, it relied on proprietary technology, which meant it was responsible for network infrastructure. By moving to NB-IoT, it hoped to take advantage of a standardized platform where network operations could be supported by operators like Vodafone. The company also wanted to see if NB-IoT could handle the demanding conditions its meters were required to operate in.

Aguas deployed NB-IoT technology in test mobile units in typical meter locations throughout the city of Mocado in Valencia, Spain. The units were installed in difficult locations such as underground, indoors, and in recessed niches behind metal covers. Despite the challenging conditions, all the units reliably transmitted 24 meter readings per day, meaning the cost of sending workers into the field to make manual readings could be eliminated. In addition, the NB-IoT wireless modules in this use case can last 10 years on a single charge, which is the lifetime of a water meter. Thanks to the demonstrated success of the technology, Vodafone and Huawei have announced that the Spanish cities of Malaga and Seville, along with their water utility companies, EMASA and EMASESA, will start the implementation of NB-IoT services during the first quarter of 2017.

Elsewhere around the globe, smart parking systems using NB-IoT have already successfully been tested in Istanbul, Turkey and now a larger-scale pilot deployment is being planned for a major commuter car park in Trondheim, Norway. Smart parking solutions where wirelessly connected sensors check if a space is occupied can significantly improve car park efficiency by making it easy for drivers to find and navigate to empty parking spaces. Besides increasing car park occupancy, they can also make a real impact on urban traffic flow, as drivers spend less time on roads searching for parking. But like many IoT applications, smart parking systems have struggled to become widespread, as they required the installation of expensive and complex proprietary wireless infrastructure to collect data from individual sensors. With NB-IoT, no gateway or proprietary system is needed, as standardized NB-IoT allows individual parking sensors to send signals to the nearest NB-IoT base station where it’s immediately available to the cloud.

Planned for deployment in early 2017, the trial in Trondheim will run until March, at which point there are plans for further deployment of NB-IoT stations throughout Norway. Besides allowing the easy deployment of more smart parking systems for car parks and street parking, the planned NB-IoT infrastructure will allow for other IoT systems like street lighting automation, waste management, environmental monitoring, and even commercial or private home applications to be realized quickly and inexpensively.

Simon Glassman is the Senior Principal of Strategic Partnerships EMEA at u-blox. He is a senior business and corporate development professional with 25 years’ international experience in blue chip technology companies. 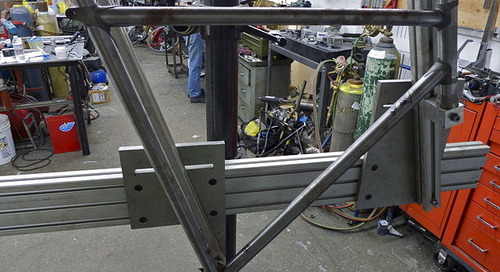 Use jigs for time savings and accuracy

When I worked as an engineer in manufacturing, an important part of my job was designing fixtures to help o...