Battery life is at a critical juncture as our smart, connected devices continue to shrink but are still expected to deliver more functionality and performance than ever before. Effectively extending battery life in future devices will require mastery of low quiescent current.

Medical patches that measure body temperature, deliver insulin, and monitor heart rate must run long and reliably. Yet, these patches often sit in storerooms for long periods of time before use. Similarly, smartwatches, earbuds, and video game controllers must perform for extended periods between charges for a better user experience. Furthermore, devices like electricity meters, gas detectors, and building automation systems, as well as flocks of field sensors, must have reliable field uptime, as it’s impractical to have to frequently charge or maintain them. Nearly all Internet of Things (IoT) devices rely on batteries that must perform reliably and over an extended period in various conditions.

System designers calculate battery life based on active, sleep, and hibernate currents of the central controlling unit, such as a microcontroller (MCU) . Associated sensors and radios will also function in unison with the MCU. The power supply is, of course, also essential, providing energy to all of a system’s functional blocks. Power supplies typically consist of regulators, such as switching regulators that boost up or buck down the voltage, or low-dropout (LDO) regulators. Some also have power management ICs (PMICs) that involve multiple power architectures and perhaps even a battery charger.

While active current consumption is an important factor in extending battery life, runtime is ultimately influenced by the amount of time spent in each power mode. The standby current of each component becomes critical as sleep and hibernate functions take larger portions of time. In such situations, the power supply’s quiescent current is the biggest contributor to a system’s standby power consumption. For example, consider a system powered by a 40-mAh, 1.55-V silver-oxide coin-cell battery with a one-year shelf life. Assuming that the current drawn is about 4 µA, reducing the current by a single microamp could increase the wearable shelf life by about three months.

Don’t underestimate the impact of your IQ

When a power supply is in standby mode, power consumption is defined by quiescent current (IQ), which refers to a circuit’s quiet state, when it isn’t driving any load and its inputs aren’t cycling. While nominal, IQ can also substantially impact a system’s power transfer efficiency during light load operation.

To extend battery life in a device, always design with components such as low-power MCUs, sensors, radios, and efficient power supplies. Some designers will opt for a boost converter to extend battery life when the battery voltage drops to low levels. However, unless the right converter is selected, this approach can result in a higher IQ, which drains the battery faster.

The end product’s form factor is another important consideration. Consumers—and, therefore, designers—are driven to go smaller and lighter. The challenge is, a device’s battery is typically the largest and heaviest component on a device’s board. A smaller battery would, of course, mean less capacity—contradictory to the demand for longer battery life. So, the challenge then becomes balancing capacity and size with efficient power-management techniques.

Increasing a system’s power efficiency presents one common way to increase battery life. The MCU, sensors, analog front-ends (AFEs), and other load circuits within a system must be driven from voltages that are different from that of the battery. As a result, each of these circuits requires its own dedicated DC-DC converter, a setup that comes with efficiency losses with each converter. These circuits also need supporting parts, such as supervisory ICs that support the microcontrollers.

For overall system management, “protection” devices like current sense amplifiers, temperature sensors, and comparators can help manage load and battery currents. Given the growing popularity of products that remain in a passive state with infrequent periods of activity, the power supply’s IQ, as well as supporting parts and protection devices, becomes the key factor in extending battery life.

Clearly, it makes sense to pay close attention to the quiescent current specs in power regulators such as boost converters; the lower this current, the more you can extend battery life. What’s needed, particularly for today’s ultra-small designs, are circuits that can deliver both lower quiescent current and a smaller form factor. In this case, even currents measuring in the milliamperes aren’t low enough to make an impact on battery life. Today’s wearable, mobile, and IoT designs call for circuits with nanoamperes of current flow.

Maxim has just released a whitepaper that provides additional information on this topic.

Meng He is an Executive Business Manager for the Core Products Group at Maxim Integrated. 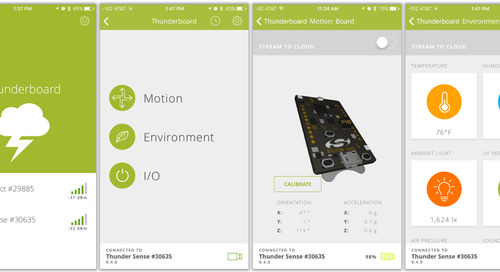 If you're developing an application that transfers wireless sensor node data to the cloud, the complexity o...

It's time to get over the vi addiction

Hi, my name is Arthur (Hello Arthur!) and I'm a vi addict. It's been six days since I last used vi. Last we...