There is another holiday this month especially for engineers: December 10th marks the 200th birthday of the mother of programming, Ada Lovelace.

Lovelace was interested in science from a young age, and took an exceptional path for women in the 19th century by studying math and science. Her notes on British mathematician Charles Babbage’s Analytical Engine are recognized as the first computing algorithm, and as a result she’s considered to be the first computer programmer. She also thought of computers as machines capable of much more than number calculators a century before that concept was realized.

In the 20th century, Lovelace was honored by the Department of Defense naming its high-order computer programming language “Ada” after her, and she continues to be an inspiration for many people in STEM fields.

In celebration of her 200th birthday, AdaCore has put together a timeline of her life, achievements, developments of the Ada language, and her continuing influence. Take a moment to honor an important figure in the history of computing and read about her life and legacy in AdaCore’s infographic. 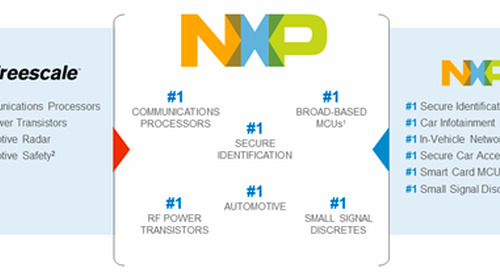 True to their word, NXP and Freescale officially finalized a $40 billion merger before the end of 2015, cre...

We're inundated with development boards. Don't get me wrong - I'm not complaining. I think that's a great t...