Smart factories are being touted as the future of manufacturing. Continuous advancement in machine intelligence is expected to bring about a fourth industrial revolution, expected to offer a wide range of benefits, including greater efficiency, flexibility, and safety.

First, smart factories are gaining traction in the automotive and transportation sector. Tightening profit margins and stringent guidelines have made automotive manufacturing a highly competitive market. As a result, optimization of the entire production process has gained momentum, with technologies, such as coordinate and vision-measuring machines and measurement gages, witnessing increased incorporation in manufacturing units. Automotive and transportation the largest end-use application segment in the global smart factory market, and is expected to remain so going forward.

Asia Pacific may be the most lucrative region for smart factories. Although developed countries have taken the lead in adopting automation in their factories, Asia Pacific remains a key region, accounting for nearly 39 percent revenue share of the global market. A majority of leading companies have their manufacturing units in developing regions, owing to which Asia Pacific is witnessing a spurt in the establishment of smart factories. Middle East and Africa, widely touted as the next appealing destination after BRICS, is also witnessing a spate of smart factory investment. In fact, in the global smart factory market, the Middle East and Africa (MEA) smart factory market is anticipated to expand at the fastest CAGR.

Real-time tracking is gaining traction among manufacturers as IoT enables them to gain greater control over supply chain management. In a bid to reduce delays and product failures, manufacturers are incorporating automated solutions in their factories. For example, kitchen maker Nobilia recently incorporated IoT to enable real-time tracking of furniture as it passes through various manufacturing stages.

China has remained the manufacturing hub of the world for a long time. Although it has lost some of its sheen in the recent times, it still is a formidable force globally. Considering the sheer number of behemoth factories in China, the country will undoubtedly remain key to the future adoption of automated technologies. It’s expected that in the Asia Pacific region, China will emerge as a lucrative region as far as the smart factory is considered.

Standards on smart factories are currently being set up. The International Electrotechnical Commission and International Organization for Standardization are responsible for laying the groundwork for making concrete smart factory standards. The U.S. and Germany are at the forefront of the standardisation process, as they have the highest number of patents and technologies related to the smart factory.

A decade ago, when smartphones first hit the streets in a big way, few would have thought that they will become ubiquitous. The same can be expected of smart factories; a decade or so from now, smart factories will become all-pervasive.

The information presented here is sourced from Future Market Insights latest report on the Smart Factory Market. A free sample of this report is available upon request.

Abhishek Budholiya is a tech blogger and digital marketing pro. As a technology and digital branding consultant with Future Market Insights, he offers his analysis on the tech market research landscape, especially when it pertains to the commercial viability of a new breakthrough. 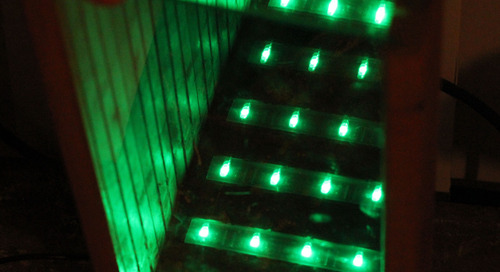 Recently I constructed an "infinity mirror," a mirror configuration with lights inside that appears to stre...