Technology in the Fast Lane at the Frankfurt Auto Show

This year’s Frankfurt Auto (or Motor) Show was held under a cloud of protests against many aspects of the vehicle culture. During the famous car gathering, multiple groups held rallies in and around Frankfurt to campaign for both green energy (Energiewende) and traffic mitigation (Verkehrswende). Even in that environment, however, the event hosted over half a million visitors in the week it was open.

Show organizers addressed issues brought up by protestors by pointing out that the Frankfurt Auto Show has already migrated from a pure motor show into a comprehensive mobility event. There was a hall dedicated to antiques (Figure 1), but the rest of the show was well into the 21st Century. 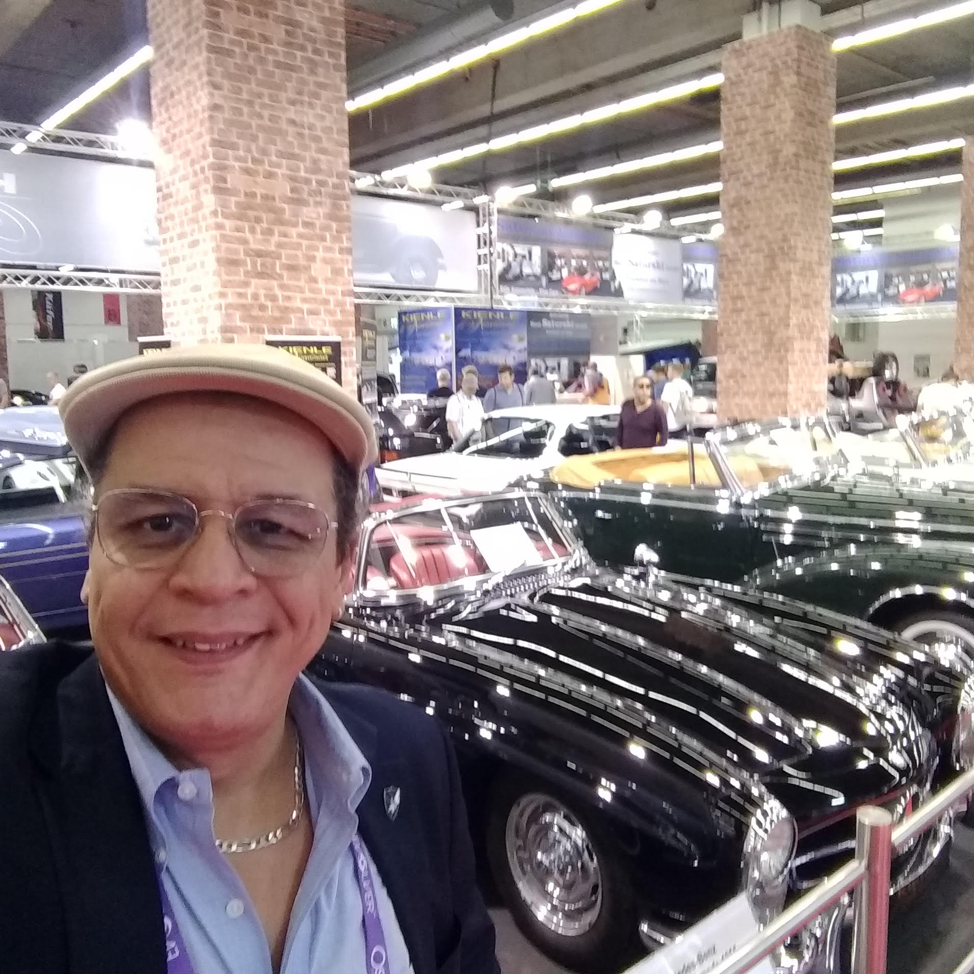 Figure 1: Although there was a hall full of antiques, the rest of the show was state-of-the-art.

With the maxim of “Driving Tomorrow,” the show highlighted key topics in the industry, from wild and visionary concept vehicles, electro-mobility demonstrators, alternative energy systems, and smart cities. With over 800 automotive exhibitors, the most visited parts of the show were electric mobility (34 percent), sports cars (33 percent) and classic cars (29 percent).

Regardless of the motive force under the hood, a significant portion of tomorrow’s car will be made up of electronic systems. Some of these systems will replace legacy technologies, but most come from new functionalities based on consumer demand and the availability of advanced electronic subsystems. Most of the interesting exhibits, not having to do with how beautiful cars are, dealt with automotive subsystems.

For example, ZF Friedrichshafen creates systems for passenger cars, commercial vehicles, and industrial applications, and they had some interesting exhibits at their booth, including a plexiglass car and driverless van to highlight their wares (Figure 2a & 2b). 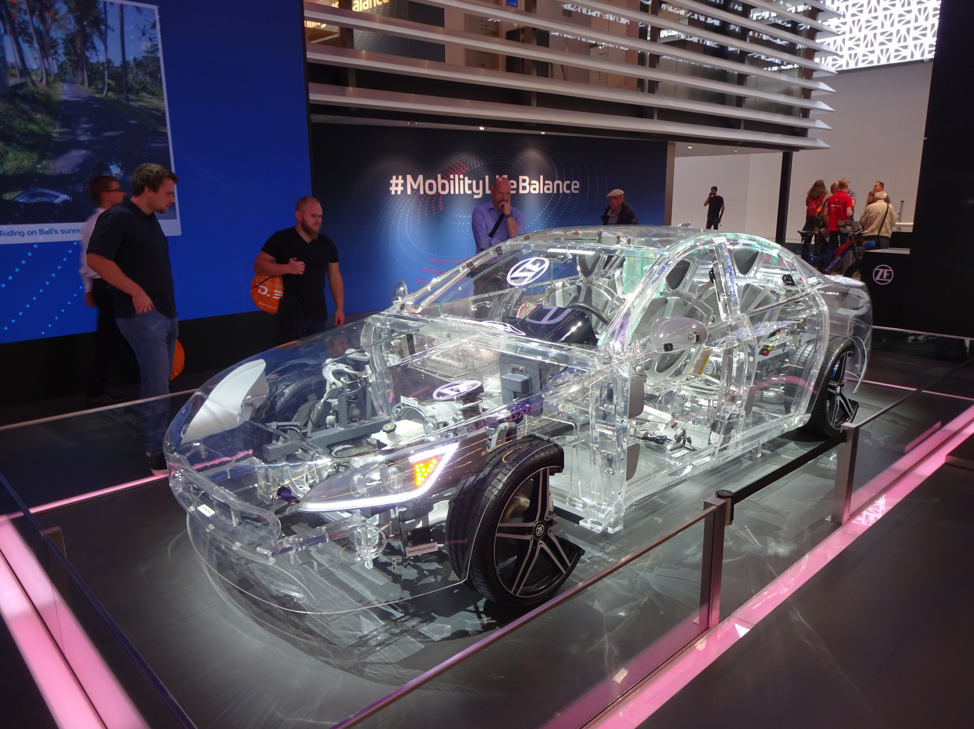 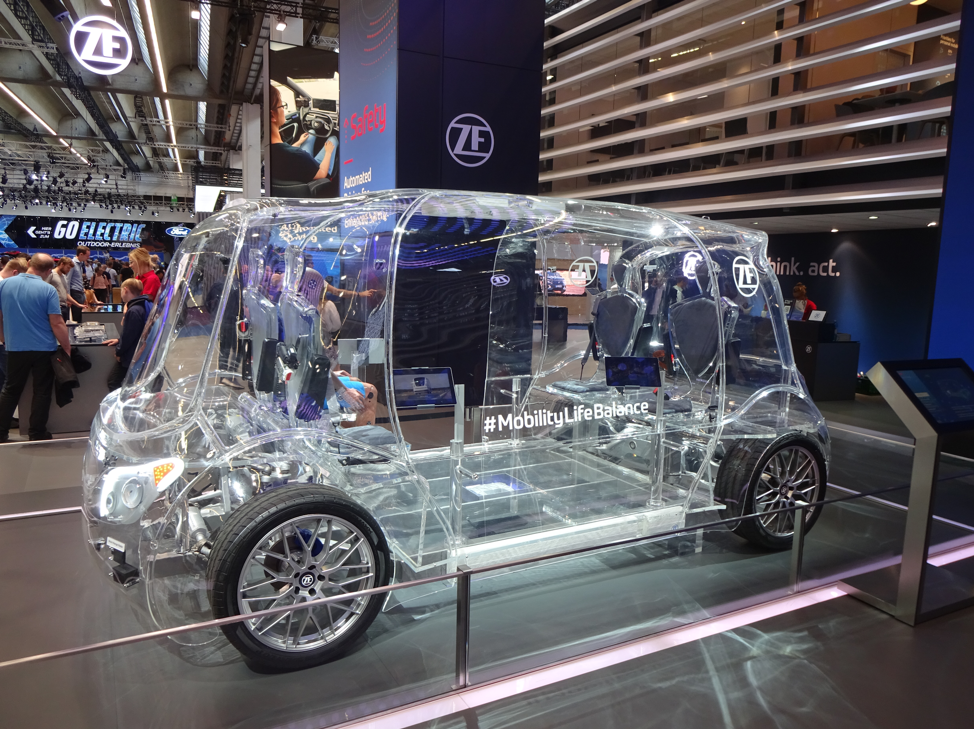 Figure 2: This transparent car (a) and van (b) at the ZF booth highlighted the plethora of electronics in next-generation vehicles.

Among the technologies at the booth, the company unveiled an innovative chassis concept called “Flying Carpet 2.0,” a predictive system that damps unpleasant vehicle movements, smooths out bends and bumps in the road, and compensates for potholes. This integrated system links advanced sensors, a smart control unit, and intelligent actuators, to create a completely responsive ride.

At the heart of this is the sMOTION active damping system, which uses four actuators to adapt the suspension movements of each individual wheel, according to the driving situation and road surface features. Unlike conventional dampers, the sMOTION actuators have an external electric motor and pump unit with integrated electronics that works as a bidirectional actuator.

Not to be outdone, Bosch also had some interesting next-generation vehicle concepts at their booth. This concept vehicle, first unveiled at CES, represents a gestalt of multiple intelligent vehicle technologies integrated to create a self-driving shuttle vehicle (Figure 3). The company doesn’t intend to get into the vehicle manufacturing business; this is a concept presented to foment development in the industry. 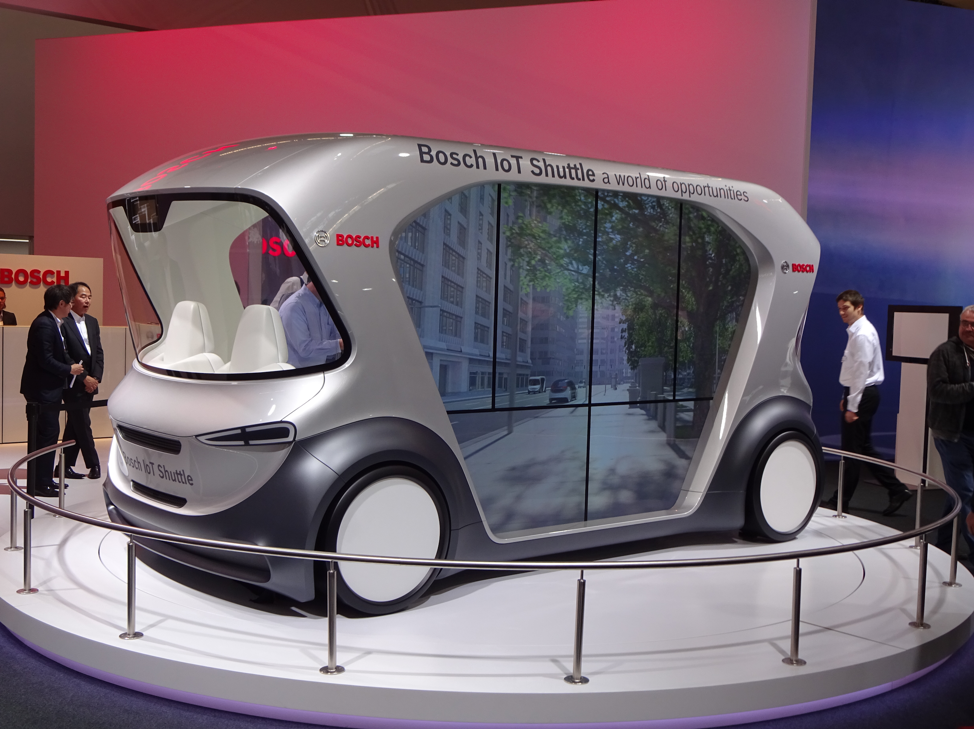 Figure 3: This boxy van is a smart shuttle demonstration platform.

The boxy vehicle (to maximize interior space) has large glass sides with infotainment screens that can be used individually or shared. Camera-based sensors monitor the interior to ensure passengers don’t leave things behind and automatically signals an alert if it detects a forgotten object. It also checks to see whether the shuttle needs interior cleaning by identifying items such as a piece of gum on the seat, or spilled coffee or soda. 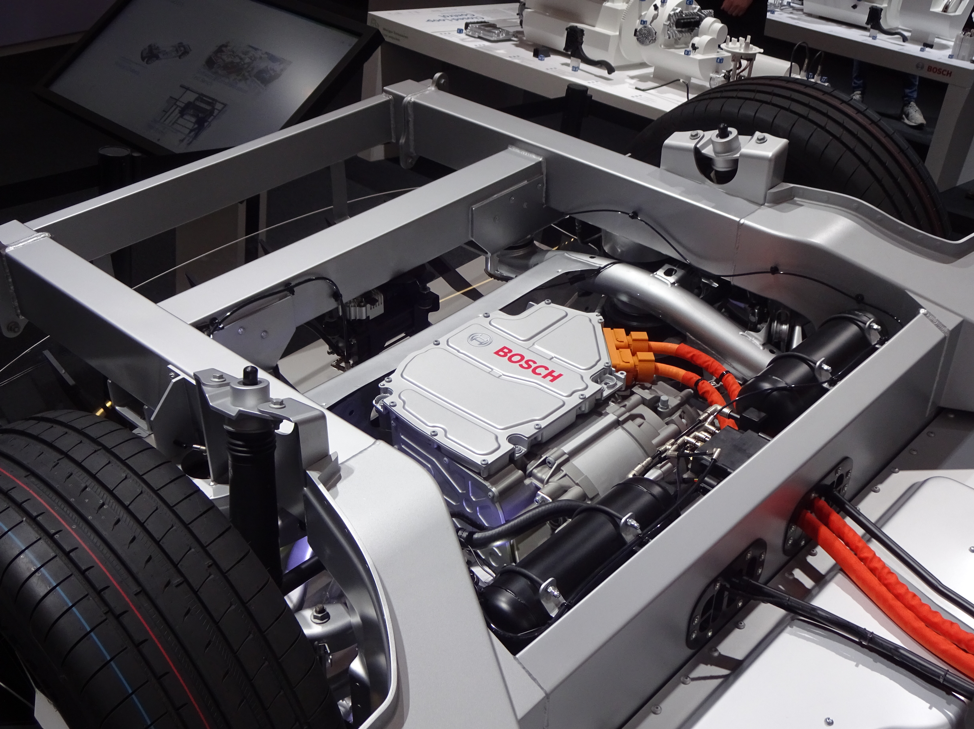 Bosch also had drivetrain systems on display, showing how their motor and electronics can be integrated to create advanced EVs (Figure 4). Next-generation electric cars will eliminate range anxiety, with better power management and more efficient motors and electronics.

The dominant non-piston power systems at the show were primarily battery-powered (aside from novelties like the new supercapacitor-empowered Lamborghini). However, there were some evangelists for fuel-cell based cars at the event as well. 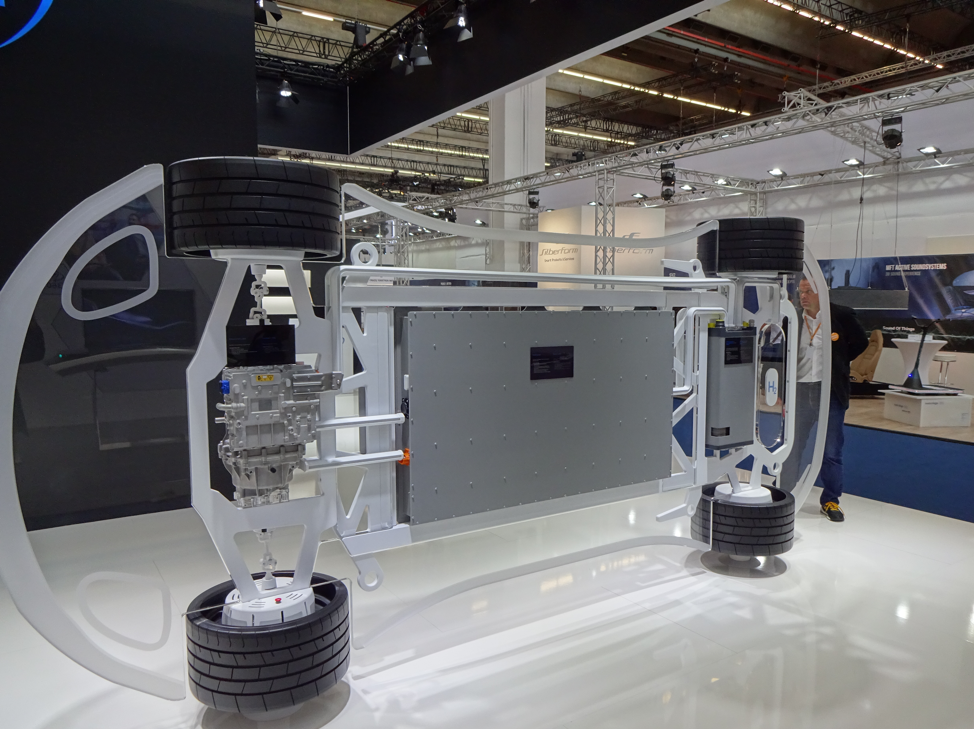 For example, ElringKlinger, a specialist in sealing and shielding technology, tooling, and engineering services, were showing their concept of a fuel-cell based powertrain (Figure 5). The company’s focus at this point is on parts commonality, and the integration of specific functions to deliver a thoroughly streamlined total cost of ownership.

The mobility landscape is shifting under our feet at this moment, with many competing ideas and technologies vying for our attention and investment. However, as different as they may be, they all share one common thread, to improve society and how we move ourselves around. Any of these solutions, or possibly all of them in various amounts, will move us forward (pun intended) some in ways we have yet to imagine. 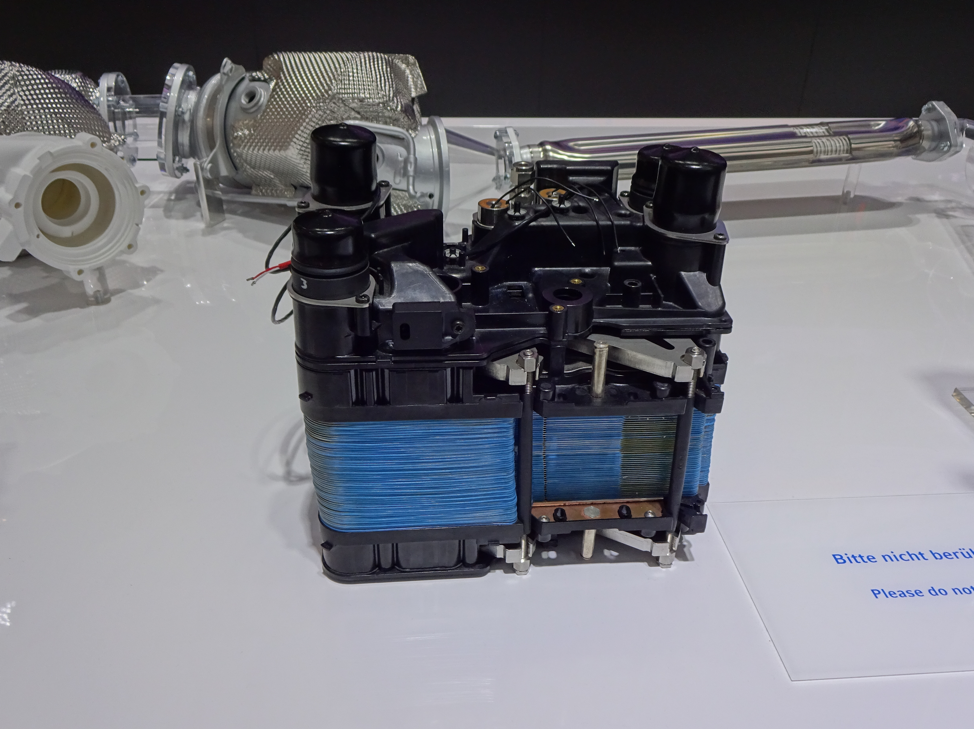 Figure 6: This 50-cell NM5 low-temperature fuel-cell stack is capable of delivering up to 12 kW.

In this article from Teguar Corporation, learn about the requirements and implementations of vehicle mounte... 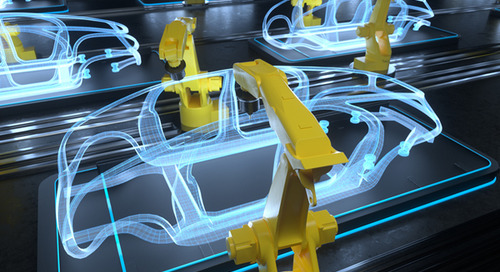