Home » Articles » A friendly introduction to XBee
× Share this Article

A friendly introduction to XBee

Digi XBee radios sure are handy for wireless communication in embedded systems, so let’s take a look from a newbie perspective at how to quickly get two of them talking to each other.

This tutorial can be applied generically to any setup with any two XBee radios, so long as you have them plugged in and ready to work with a serial port. That being said, here is a list of parts used in this tutorial:

As far as software goes, we’re going to need to use the one and only Xbee programming tool, XCTU from Digi (compatible with Windows, Mac OS, and Linux). I suppose if you are hardcore you could program using raw AT commands in the console, but I doubt that’s a path you’re willing to take at this time!

We’ll start by installing the software, configuring the XBee radios, installing them, and finally getting them talking to each other.

Installation of the Digi XCTU software should be straightforward enough. Head over to the XCTU download page, download it to your platform, and follow the install instructions.

When you’ve installed it, open it up.  Here’s what you should see: 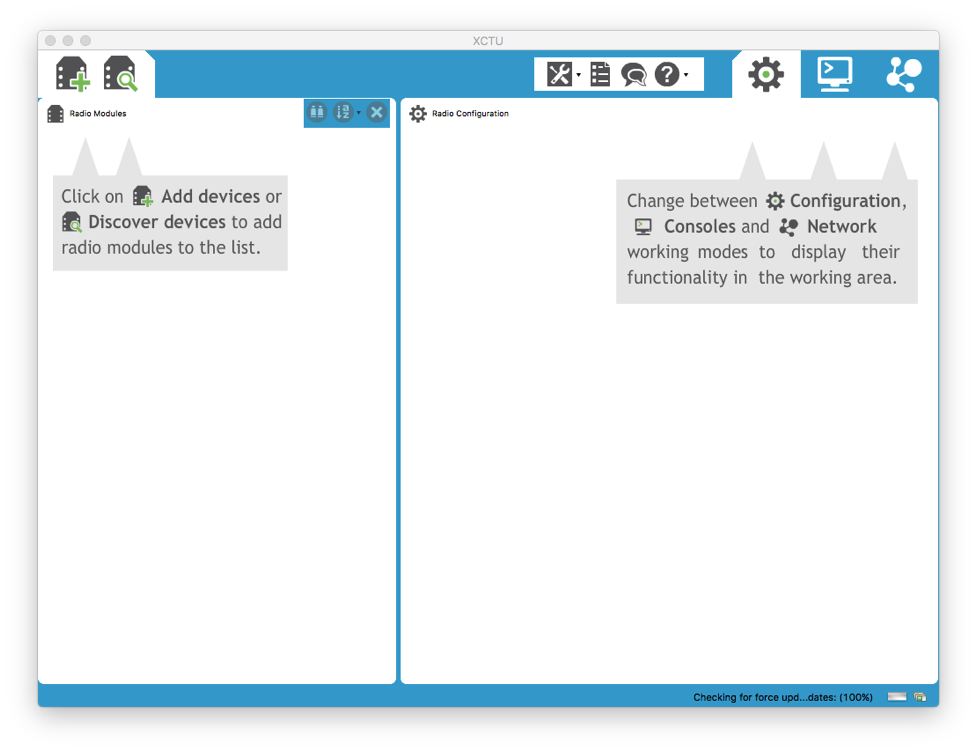 Okay! Now, we’ll move on to hooking up the XBee radios using the XBee explorer breakout board and configuring them using our newly installed XCTU program. 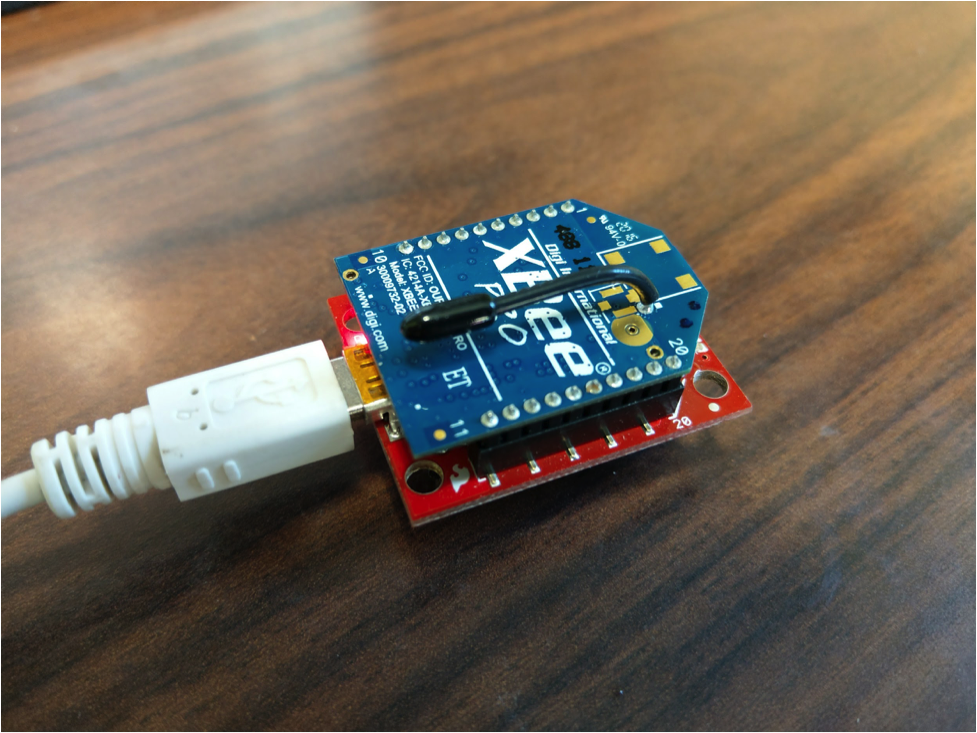 Once you’ve made the connections, open XCTU (if you haven’t already) and click on the “Discover devices” button. From here, you just have to scan the port plugged into the XBee Explorer. 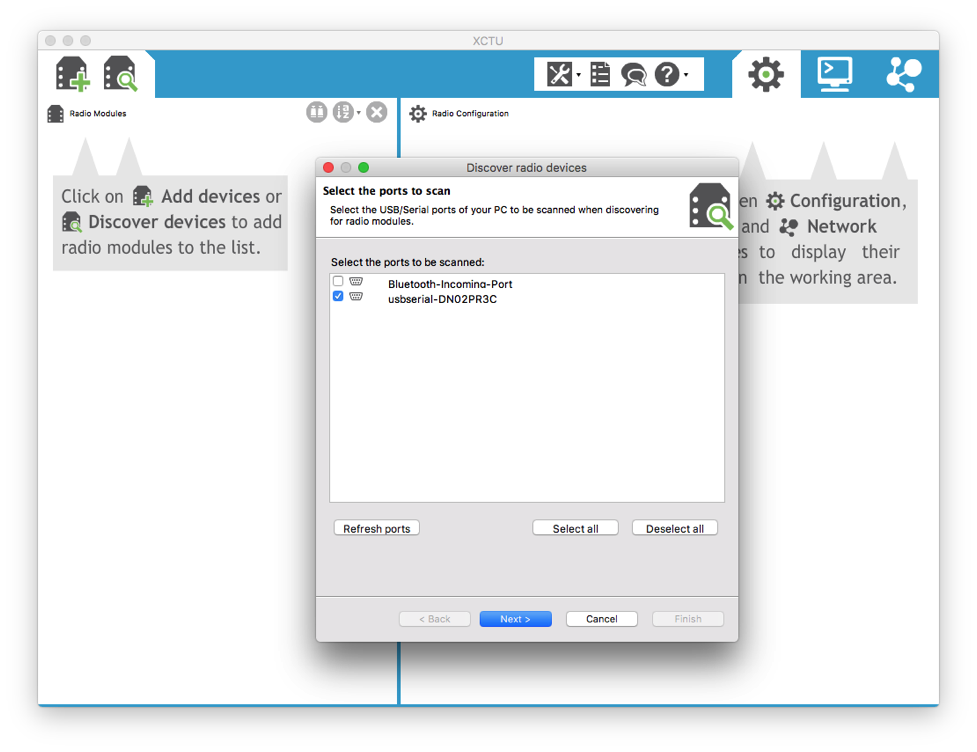 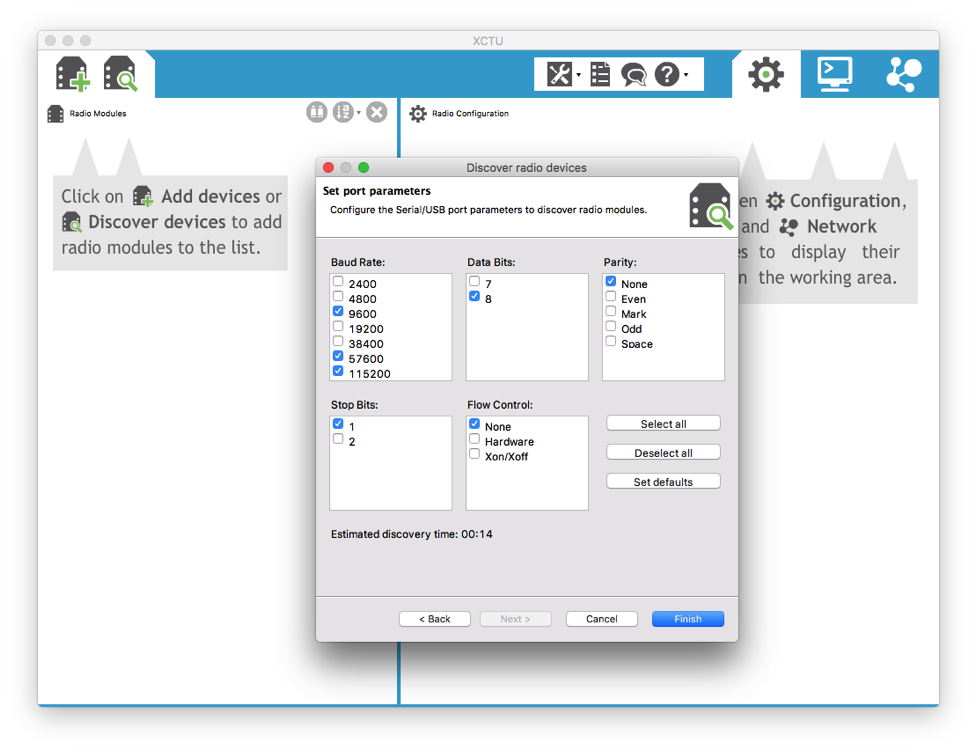 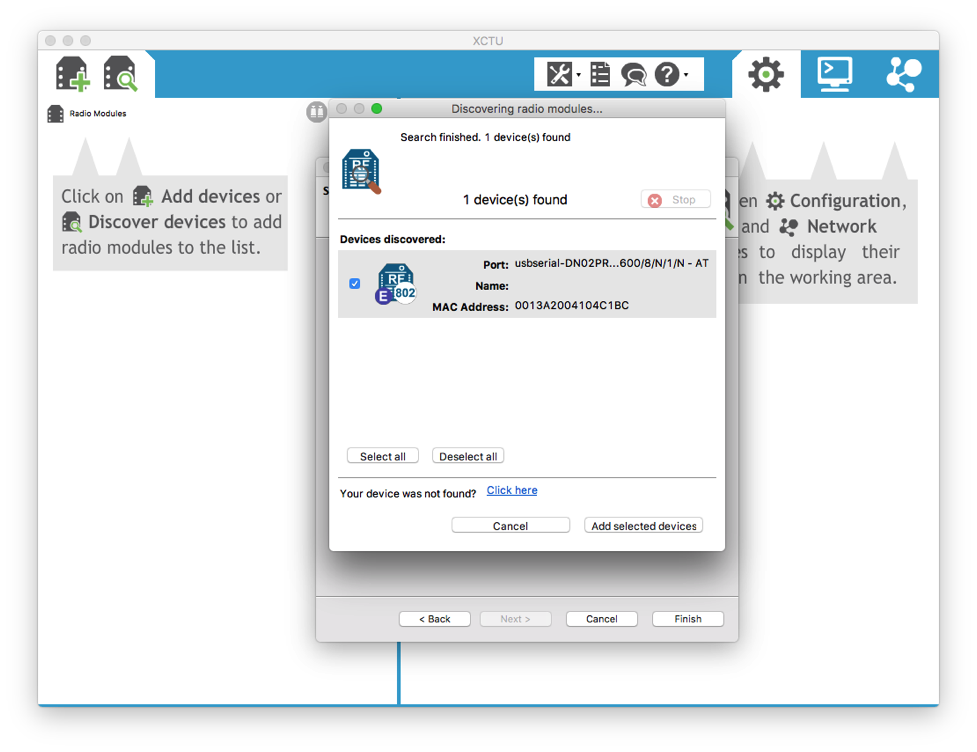 Before continuing there are a couple of concepts and some terminology we’ll need to get familiar with.

Tip: Save yourself headaches and label your XBee radios so you can tell them apart. A piece of tape or tiny post-it note and permanent marker will do just fine. Label one “C” for “Coordinator”, and the other "ED” for “End Device”. You can also write the MY 16-bit source address for extra clarity.

Let’s take the first XBee radio, which we’ll designate as our Coordinator (and will ultimately be installed in the TS-7553-V2) and open the “Configuration” window in XCTU. This is what you should be looking at: 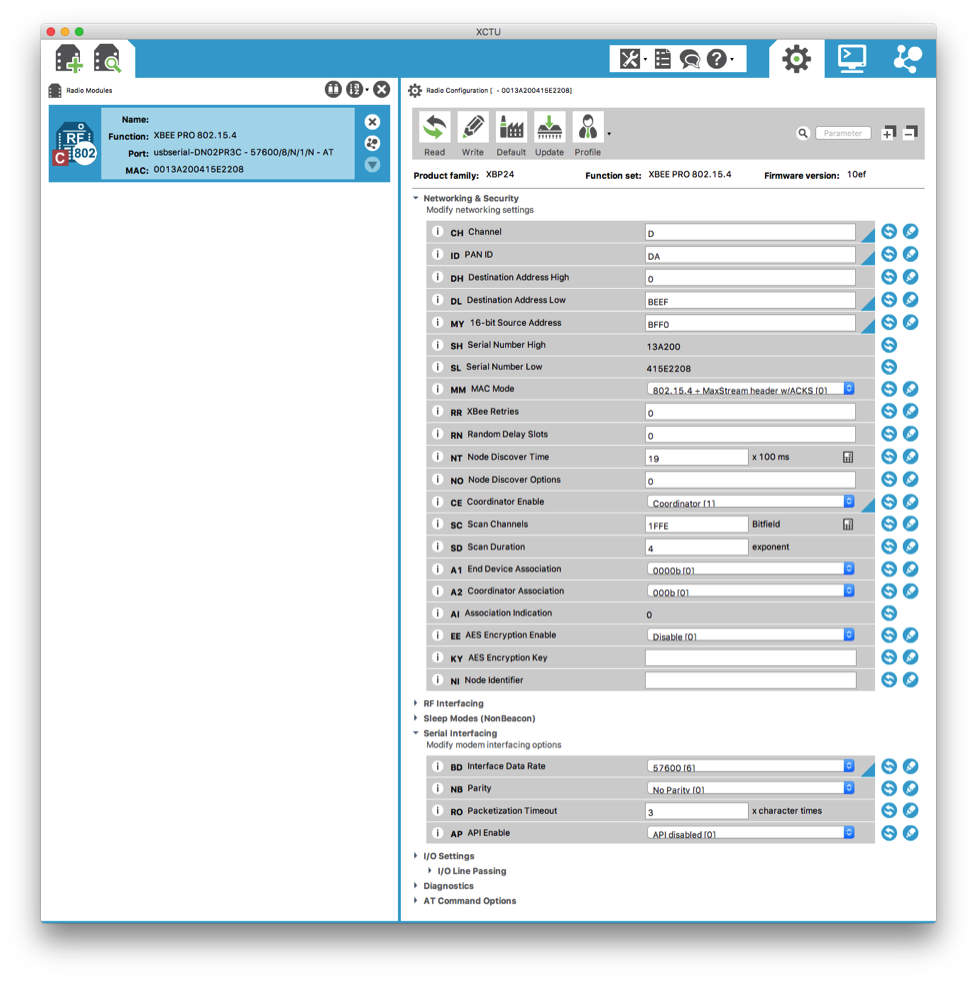 Tip: XCTU is pretty well designed, with handy little UI gems like a blue ‘dog ear’ triangle to mark which settings have changed from defaults. Firmware updates, updating individual settings, and more come in pretty handy.  Be sure to familiarize yourself when ready.

Here’s how we’re going to set our coordinator:

The following two configuration changes are optional, but they make things more responsive and run more smoothly in my experiences. If you do elect to change these setting, be sure to make the same changes on both XBee radios.

Once you’ve set these configurations, make sure to click on the “Write” button to save the changes to the XBee radio. Once it’s finished writing, go ahead and unplug the XBee Explorer and take out the XBee radio.

There’s a XBee socket on the TS-7553-V2 that shows up under the /dev/ttymxc7 serial device. But before we can plug in our XBee radio, we need to remove or bend pin 8 of the XBee radio in order to avoid conflicts. This will be fixed in an upcoming version of the TS-7553-V2 . 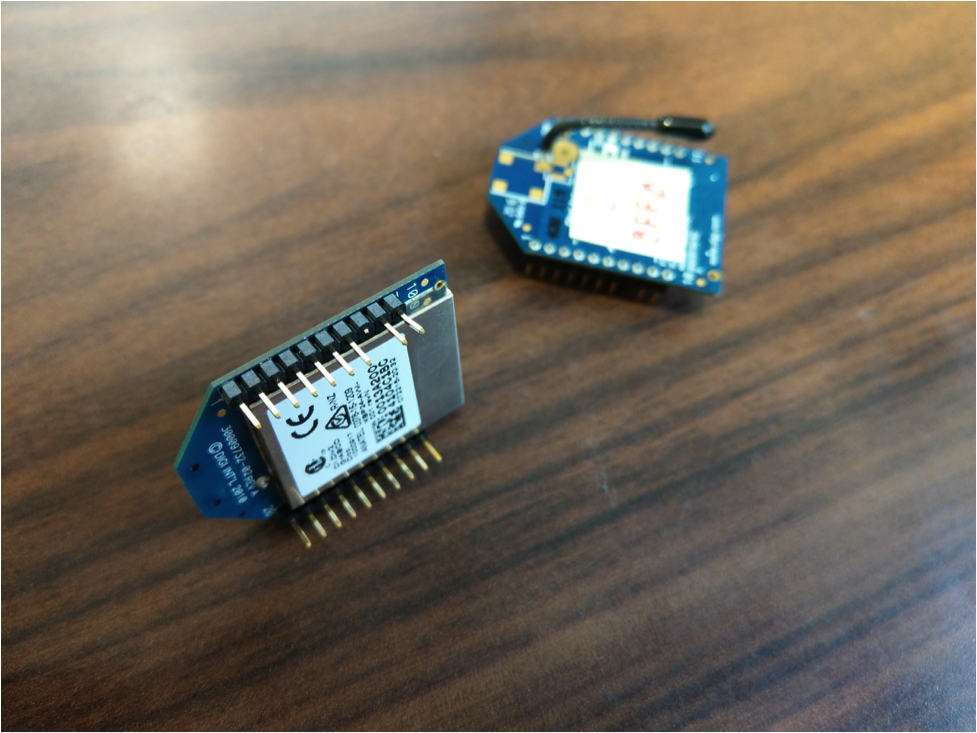 Now, plugin the XBee radio we’ve designated as the coordinator like this: 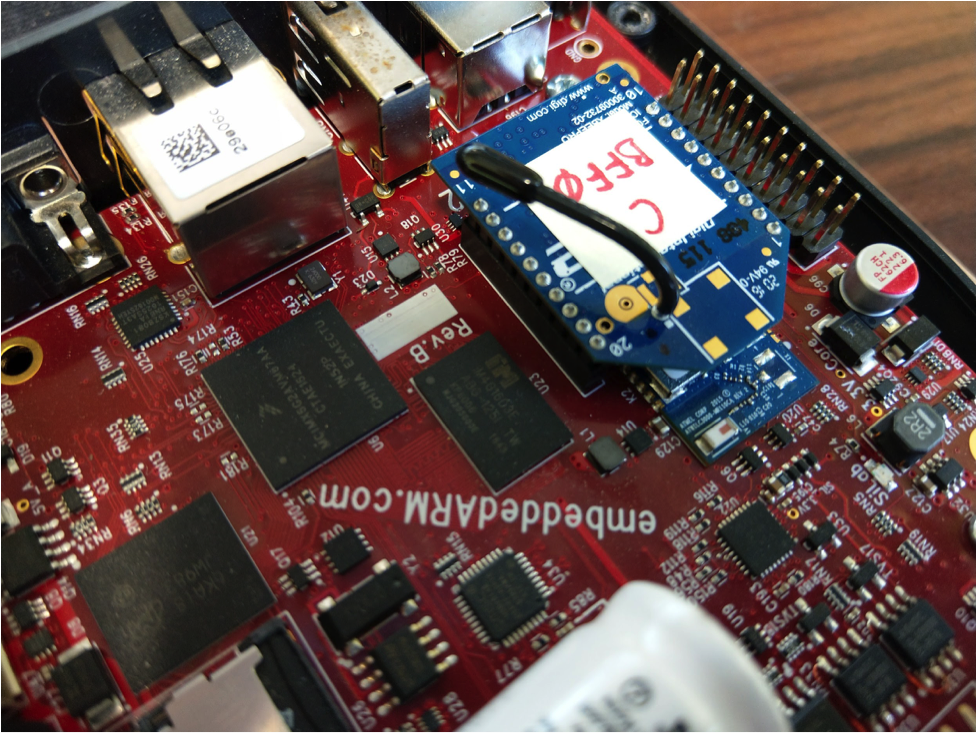 Tip:  Make sure that the flat end of the XBee radio is facing back towards the USB and Ethernet connectors. Otherwise, you may do permanent damage to the XBee radio.

Next make sure that the XBee radio is powered on and ready to communicate. Issuing the following command will help you determine whether it’s turned on (it should be by default):

Then let’s open a serial connection with the XBee radio using picocom, making sure that the baud rate is set to the same value as BD, Interface Data Rate on the XBee radios.

Perfect! Now, we’re ready for the next step. 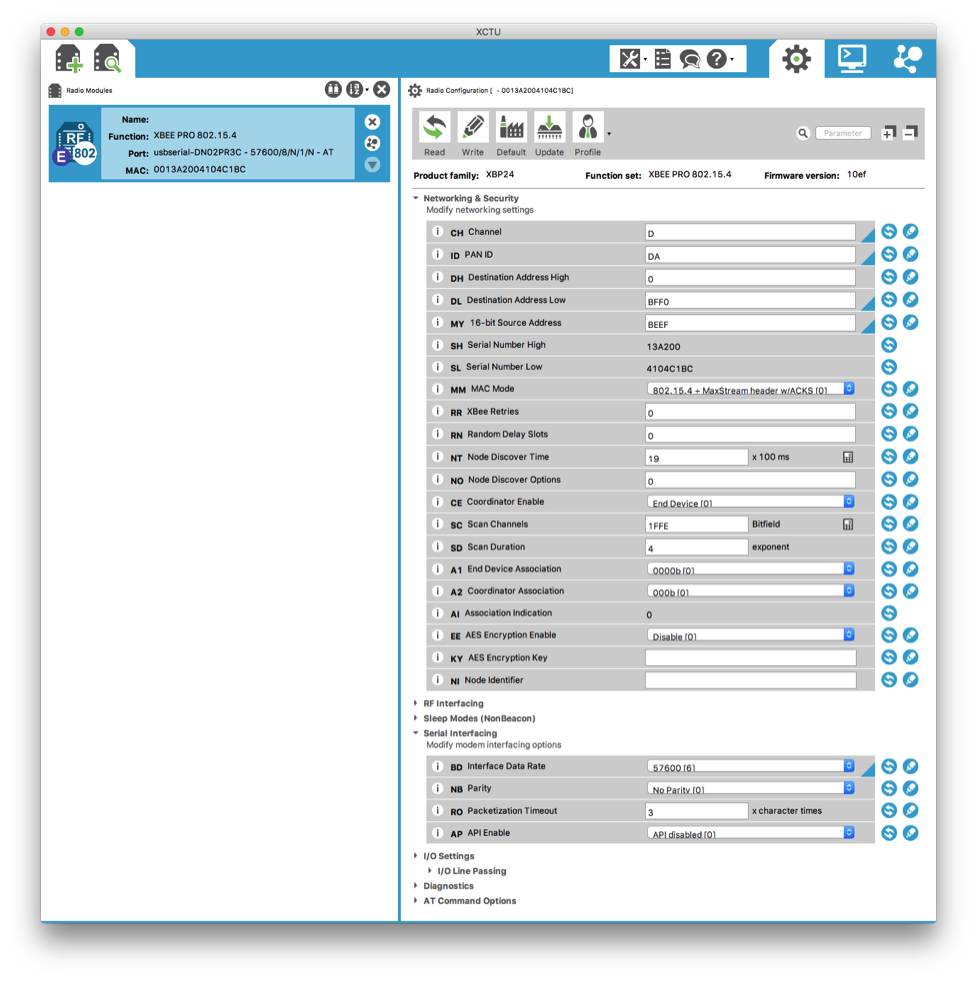 Here’s what we’re going to set on our end device:

Again, these are optional, but they must be the same on both devices.

Great!  Now, we’re going to leave this one plugged into the XBee Explorer for the next step.

Now, the exciting part: Communicating wirelessly over a serial port provided by the XBee radio.

We start off by going back to our XCTU program and opening the “Console” window, like so: 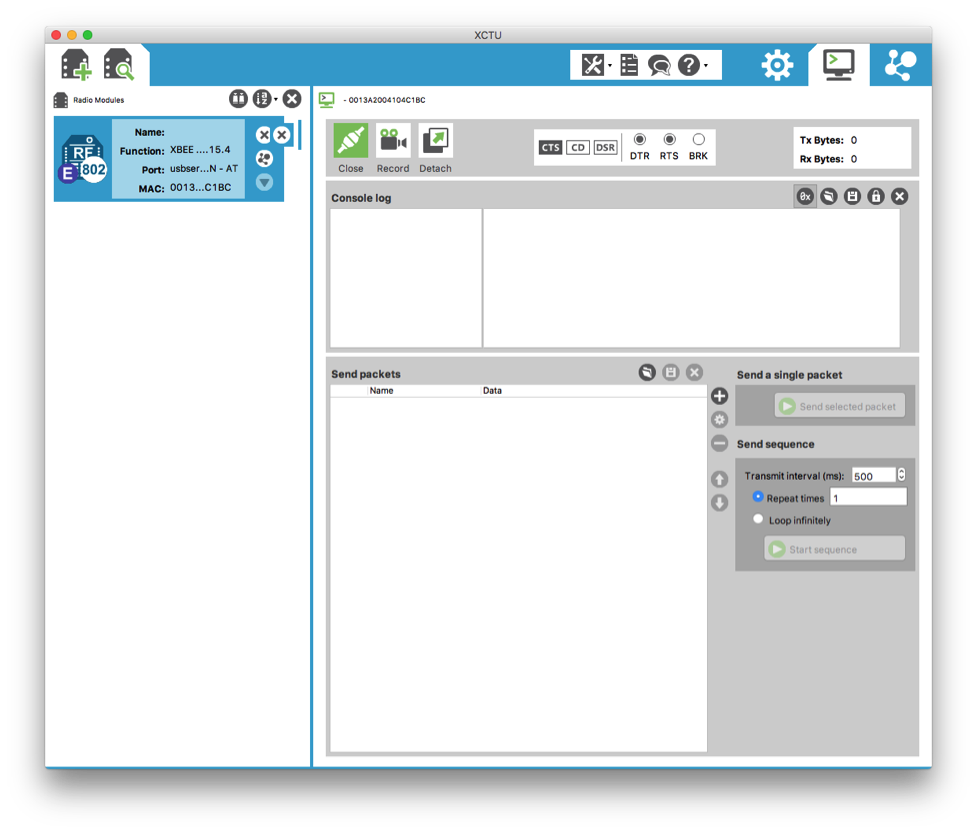 We’re now going to send a packet from our end device to the coordinator installed in our TS-7553-V2. Click on the plus icon (+) next to the “Send packets” field. Here, type in your ASCII message (something as simple as “Testing” will work), and save the packet once finished. Next, select the new packet and click on the “Send selected packet” button.

Head over to the TS-7553-V2 picocom session you opened earlier and you should now see “Testing” written on the screen!  In picocom, type something like “Testing back!”, and you should see the message being written in the Console log field of the XCTU program!

Congratulations on setting up your wireless serial console connection! You’re well on your way to creating something awesome using XBee radios!

Conclusion and Next Steps

In this guide, we walked through what it took to install, configure, and wirelessly transfer data between two XBee radios. Now that you have the basics out of the way, it’s time to dive into the world of XBee wireless with different topologies and configuration options.

If you have any further questions, or feel like we’ve forgotten to mention anything, please let me know in the comments!

Hardware emulation is a newcomer compared to the Doctor Who series, arriving on the scene in the 1980s vers...

No more perimeters: Why cybersecurity is now more challenging than ever

When files are everywhere, how do you determine who has access to what? When you’ve got contractors all ove...